A: “CRISPR” (pronounced “crisper”) stands for Clustered Regularly Interspaced Short Palindromic Repeats, which are the hallmark of a bacterial defense system that forms the basis for CRISPR-Cas9 genome editing technology. In the field of genome engineering, the term “CRISPR” or “CRISPR-Cas9” is often used loosely to refer to the various CRISPR-Cas9 and -CPF1,(and other) systems that can be programmed to target specific stretches of genetic code and to edit DNA at precise locations, as well as for other purposes, such as for new diagnostic tools. With these systems, researchers can permanently modify genes in living cells and organisms and, in the future, may make it possible to correct mutations at precise locations in the human genome in order to treat genetic causes of disease. Other systems are now available, such as CRISPR-Cas13’s, that target RNA provide alternate avenues for use, and with unique characteristics that have been leveraged for sensitive diagnostic tools, such as SHERLOCK.

Q: Where do CRISPRs come from?

A: CRISPRs were first discovered in archaea (and later in bacteria) by Francisco Mojica, a scientist at the University of Alicante in Spain. He proposed that CRISPRs serve as part of the bacterial immune system, defending against invading viruses. They consist of repeating sequences of genetic code, interrupted by “spacer” sequences – remnants of genetic code from past invaders. The system serves as a genetic memory that helps the cell detect and destroy invaders (called “bacteriophage”) when they return. Mojica’s theory was experimentally demonstrated in 2007 by a team of scientists led by Philippe Horvath.

In January 2013, the Zhang lab published the first method to engineer CRISPR to edit the genome in mouse and human cells.

For more on many of the scientists and teams who contributed to the understanding and development of the CRISPR system from the initial discovery to the first demonstrations of CRISPR-mediated genome editing, visit our CRISPR timeline.

Q: How does the system work?

A: CRISPR “spacer” sequences are transcribed into short RNA sequences (“CRISPR RNAs” or “crRNAs”) capable of guiding the system to matching sequences of DNA. When the target DNA is found, Cas9 – one of the enzymes produced by the CRISPR system – binds to the DNA and cuts it, shutting the targeted gene off. Using modified versions of Cas9, researchers can activate gene expression instead of cutting the DNA. These techniques allow researchers to study the gene’s function.

Research also suggests that CRISPR-Cas9 can be used to target and modify “typos” in the three-billion-letter sequence of the human genome in an effort to treat genetic disease. 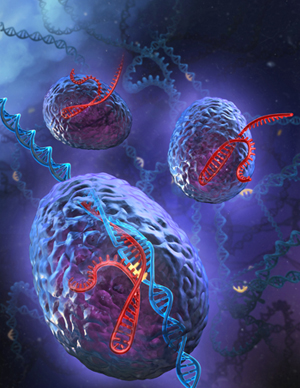 Q: How does CRISPR-Cas9 compare to other genome editing tools?

A: CRISPR-Cas9 is proving to be an efficient and customizable alternative to other existing genome editing tools. Since the CRISPR-Cas9 system itself is capable of cutting DNA strands, CRISPRs do not need to be paired with separate cleaving enzymes as other tools do. They can also easily be matched with tailor-made “guide” RNA (gRNA sequences designed to lead them to their DNA targets. Tens of thousands of such gRNA sequences have already been created and are available to the research community. CRISPR-Cas9 can also be used to target multiple genes simultaneously, which is another advantage that sets it apart from other gene-editing tools.

Q: How does CRISPR-Cpf1 differ from CRISPR-Cas9?

CRISPR-Cpf1 differs in several important ways from the previously described Cas9, with significant implications for research and therapeutics.

First, in its natural form, the DNA-cutting enzyme Cas9 forms a complex with two small RNAs, both of which are required for the cutting activity. The Cpf1 system is simpler in that it requires only a single RNA. The Cpf1 enzyme is also smaller than the standard SpCas9, making it easier to deliver into cells and tissues.

Second, and perhaps most significantly, Cpf1 cuts DNA in a different manner than Cas9. When the Cas9 complex cuts DNA, it cuts both strands at the same place, leaving ‘blunt ends’ that often undergo mutations as they are rejoined. With the Cpf1 complex the cuts in the two strands are offset, leaving short overhangs on the exposed ends. This is expected to help with precise insertion, allowing researchers to integrate a piece of DNA more efficiently and accurately.

Third, Cpf1 cuts far away from the recognition site, meaning that even if the targeted gene becomes mutated at the cut site, it can likely still be re-cut, allowing multiple opportunities for correct editing to occur.

Fourth, the Cpf1 system provides new flexibility in choosing target sites. Like Cas9, the Cpf1 complex must first attach to a short sequence known as a PAM, and targets must be chosen that are adjacent to naturally occurring PAM sequences. The Cpf1 complex recognizes very different PAM sequences from those of Cas9. This could be an advantage in targeting, for example, the malaria parasite genome and even the human genome.

Q: What other scientific uses might CRISPR have beyond genome editing?

A: CRISPR genome editing allows scientists to quickly create cell and animal models, which researchers can use to accelerate research into diseases such as cancer and mental illness. In addition, CRISPR is now being developed as a rapid diagnostic. To help encourage this type of research worldwide, Feng Zhang and his team have trained thousands of researchers in the use of CRISPR genome editing technology through direct education and by sharing more than 40,000 CRISPR components with academic laboratories around the world.