Many serious diseases cannot be cured by medicines, such as heart failure, Late Stage Diabetes, hemophilia, myeloma, End-Stage Cirrhosis, etc. The best method is allogeneic transplantation. However, due to the limited donors and the risk of immune rejection, researchers are dedicated to finding more efficient and safer treatment besides allogeneic transplantation. Induced pluripotent stem cells (iPSCs) can be derived from the body cells of the patients themselves, which eliminates the risk of immune rejection, and has the potential of differentiation into different cells. Transplantation of cells derived from iPSC, such as cardiomyocytes, hepatocytes, neurocytes, T cells, hematopoietic stem cells (HSCs) and islet cells, is possible to solve many medical problems. By CRISPR/Cas9 technology, the mutations that simulating diseases could be introduced into iPSC. Using CRISPR/Cas9 to repair the mutations in iPSC disease models is also a popular application. 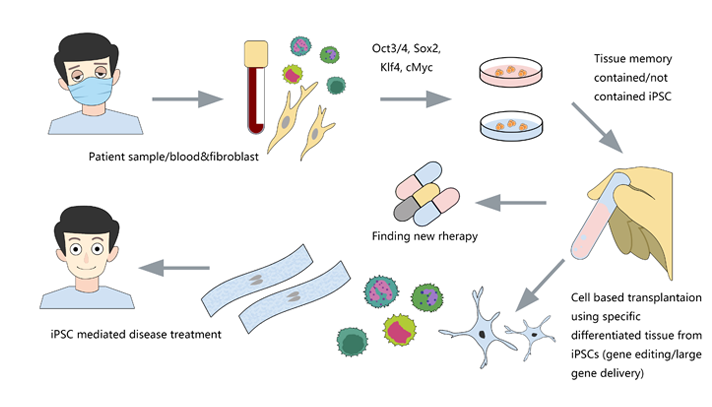 
The success rate of gene editing in human iPSC is lower because, unlike tumor cell lines, iPSC does not have the characteristics of chromosomal abnormality and strong ability of DNA repair. CRISPR/Cas9 has the advantages of high efficiency, easy to construct and low toxicity in human cells, so it is the most common method in iPSC genome editing.


The limited T cells and the difficulty of proliferation is the main obstacle of T-cell immunotherapy, which can be overcome by using pluripotent stem cells with proliferation and differentiation ability to generateT-iPSC with antigen specificity. Strict antigen specificity is essential for safe and effective T-cell immunotherapy. However, in the process of double-positive CD4/CD8differentiation, the rearrangement of the T-cell receptor (TCR) α chain will lose antigen specificity. This TCR rearrangement was prevented by removing the recombinant enzyme gene (RAG2) in T-iPSCswith CRISPR/Cas9. Xenotransplantationof CD8αβ-T cells with stable TCR can effectively inhibit tumor growth in disease models. This contributes to a safe and effective T-cell immunotherapy.（Minagawa, Atsutaka, et al.） 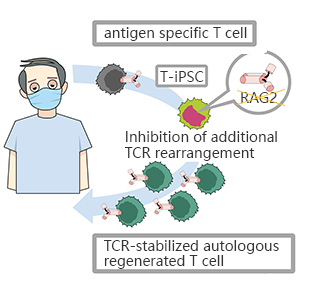 
Alzheimer's disease (AD) is a progressive and irreversible neurodegenerative disease, which can lead to degeneration of nerve cells and atrophy of brain. It is considered as the most common form of dementia. The A79V mutation of PSEN1 gene can cause Alzheimer's disease. By studying the effect of this mutation on cell phenotype, researchers can further study the pathology of this disease and develop a more effective treatment. The researchers reprogrammed the somatic cells of a patient into pluripotent stem cells (iPSCs), and then replaced the mutated gene with a wild-type sequence. By studying the disease model and the modified iPSC, the effect of the mutation on cell phenotype can be determined, so as to further study the pathological effect of the mutation.（Pires, C., et al.）


With CRISPR-UTM, iPSCwould be co-transfected with gRNA, Cas9 and donor oligo by electroporation. After the DNA DSB caused by the complex of gRNA and Cas9, iPSCs use donor oligo carrying wild-type sequence as a template for homologous recombination repair (HDR) and replace the target sequence with point mutation.


The most common method to treat hemophilia is substitution therapy, but this method has the risk of virus infection, and it is a method that needs lifelong continuous treatment. Gene therapy seems like the only way can cure hemophilia. CRISPR/Cas9 technology can be used for gene therapy of hemophilia. The mutations of coagulation factors, F8 and F9, are the main causes of hemophilia. Previous studies have shown that F9 is a more effective gene therapy target. AAVS1-Cas9-sgRNAplasmid and AAVS1-EF1α-F9 cDNA puromycin donor plasmid were constructed and transferred into iPSC. Human factor IX (hFIX) antigen activity was detected in the culture supernatant. Finally, liver cells differentiated from iPSC were transplanted into NOD/SCIDmice by spleen injection, to cure hemophilia B.（Lyu, Cuicui, et al.）


With CRISPR-UTM, iPSCwould be co-transfected with gRNA, Cas9 and donor vector by electroporation. After drug screening, single clones would be generated. Positive clones would be validated by sequencing. 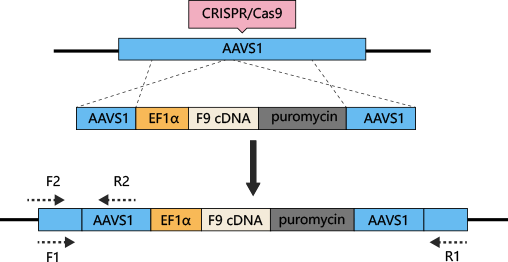 
The study of human embryonic stem cells (hESCs) derived from early embryos has been controversial in ethics, and the rejection of differentiated cells derived from hESCs intransplantation has limited its clinical application. Hepatocytes, nerve cells, T cells, cardiomyocytes, hematopoietic stem cells and pancreatic cells can be differentiated from patients' somatic cells (such as fibroblasts) or existing iPSCs.

Ubigene focuses on the optimization of iPSC reprogramming, gene editing and differentiation, and has established a set of mature experimental procedures. With CRIPSR-UTM technology, gene editing in iPSC is much accessible.