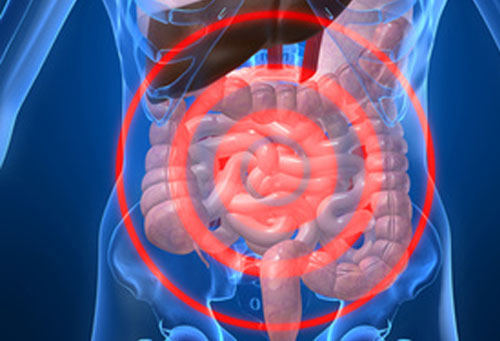 Scientists at Children's Hospital of Philadelphia (CHOP) say they have pinpointed a genetic variation responsible for driving the development of inflammatory bowel disease (IBD). The genetic pathway associated with this variation is involved in other immune disorders, suggesting the mechanism they identified could serve as an important therapeutic target. The findings, "Regulation of Janus Kinase 2 by an Inflammatory Bowel Disease Causal Non-coding Single Nucleotide Polymorphism," are published in the Journal of Crohn's and Colitis.


"Among the >240 genetic loci described to date which confer susceptibility to inflammatory bowel disease, a small subset has been fine-mapped to an individual, non-coding single nucleotide polymorphism [SNP]. To illustrate a model mechanism by which a presumed-causal non-coding SNP can function, we analyzed rs1887428, located in the promoter region of the Janus kinase 2 [JAK2] gene. We utilized comparative affinity purification-mass spectrometry, DNA–protein binding assays, CRISPR/Cas9 genome editing, transcriptome sequencing and methylome quantitative trait locus methods to characterize the role of this SNP," write the investigators.

"We determined that the risk allele of rs1887428 is bound by the transcription factor [TF] RBPJ, while the protective allele is bound by the homeobox TF CUX1. While rs188748 only has a very modest influence on JAK2 expression, this effect was amplified downstream through the expression of pathway member STAT5B and epigenetic modification of the JAK2 locus."

"Despite the absence of a consensus TF-binding motif or expression quantitative trait locus, we have used improved methods to characterize a putatively causal SNP to yield insight into inflammatory bowel disease mechanisms."

The two main forms of IBD, Crohn's disease and ulcerative colitis, have an important genetic component. More than 240 genetic regions have been identified that associate with IBD, more than any other pathological condition that has been studied. However, as each genetic region has multiple markers, it's important to identify those that are causally involved.

Using a variety of assays and sequencing methods, the study team sought to characterize the single nucleotide polymorphism (SNP) rs1887428, which is located on the promoter region of the JAK2 gene. The protein coded by this gene is responsible for controlling the production of blood cells. Mutations of JAK2 have been linked to various blood cancers. Multiple drugs have been developed to target the JAK pathway to treat autoimmune disorders and malignancies. However, genetic and biological markers are needed to determine whether patients will respond to them.

"We chose this SNP for in-depth study because of its high probability for modifying JAK2 expression," said Christopher Cardinale, MD, PhD, a scientist in the Center for Applied Genomics at CHOP and first author of the study. "The model we established in this study may help us learn more about other causal SNPs associated with other autoimmune diseases."

The study identified transcription factors, which regulate gene expression, that were associated with this particular SNP. Two transcription factors in particular—RBPJ and CUX1–can recognize the DNA sequence altered by the rs1887428 SNP. Additionally, the researchers found that while the SNP only has a very modest influence on JAK2 expression, the effect was amplified by other proteins in the JAK2 pathway.

"Using this method, we believe we have added an important tool to our arsenal of SNP-to-gene assignment methods, allowing us to pinpoint disease-driving genetic mutations that have previously been difficult to properly assign risk," said Hakon Hakonarson, MD, PhD, director of the Center for Applied Genomics at CHOP and senior author of the paper. "This study in particular also provides evidence that drugs targeting JAK2 may provide some benefit for those patients suffering from IBD who carry mutations that upregulate the JAK2 pathway, though such precision-based approaches would need to be validated in clinical studies."