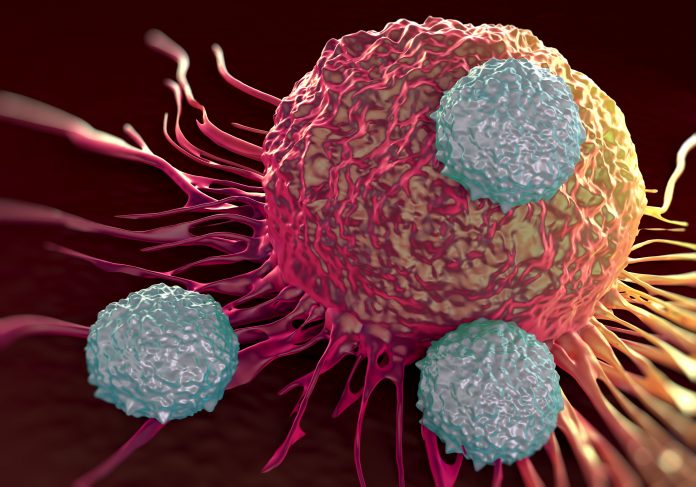 Scientists at the University of Texas (UT) Southwestern Medical Center used CRISPR-based screening to help identify a mechanism by which cancer cells can regulate the production of a protein that suppresses immune system responses against the tumor. The team's combined studies in human lung cancer cells and in mice found that blocking heme production activated the integrated stress response (ISR), which led to increased production of programmed death ligand 1 (PD-L1) and suppression of antitumor immunity. PD-L1 is a key target of immunotherapy drugs known as checkpoint inhibitors.


The scientists also showed that the effects of heme inhibition could be replicated by overexpressing a single gene, eIF5B, which they subsequently found is upregulated in human lung cancers. Headed by UT Southwestern associate professor Kathryn A. O'Donnell, PhD, the team said their results suggest that eIF5B functions as an oncogene, and that the findings could point to new approaches to boosting the effectiveness of anticancer immunotherapy. "… these findings revealed an unanticipated mechanism of immune checkpoint activation in lung cancer with important therapeutic implications," they concluded in their published paper in Nature Cancer, which is titled, "eIF5B drives integrated stress response-dependent translation of PD-L1 in lung cancer."

Although such immune checkpoint inhibitors have proved to be effective against certain types of cancer, and most notably in NSCLC—which is the leading cause of cancer-associated deaths worldwide—it's still not known how cancer cells overexpress PD-L1 to shield themselves from immune system attack. "Despite substantial progress in targeting this pathway, the mechanisms through which PD-L1 is upregulated in NSCLC and other tumor types are incompletely understood," the investigators wrote.

To help provide the answers, the O'Donnell team used genome-wide CRISPR screening to identify genes that might act as regulators of PD-L1 in human lung cancer cells. Using the CRISPR technology the investigators individually removed 19,000 genes in a human NSCLC cell line, and grew the cells for two weeks. They then used a fluorescent PD-L1 antibody to see which of the cells produced either more, or less PD-L1, and carried out sequencing to identify genes that acted as positive regulators to promote PD-L1 production, or negative regulators that stymied PD-L1 production.

Surprisingly, the results highlighted a gene called Urod, which normally plays a role in the production of heme, as a potent inhibitor of PD-L1 production. Heme is the iron-containing molecule that carries oxygen in red blood cells, but it is also broadly necessary in other cells for maintaining homeostasis. "… loss of Urod in multiple NSCLC cell lines robustly induced PD-L1 protein levels," the investigators stated. "Surprisingly, PD-L1 mRNA levels decreased under these conditions, suggesting that loss of Urod post-transcriptionally induces PD-L1."

Further experiments showed that hampering heme production turned on a pathway called the integrated stress response (ISR) that cells broadly use to deal with diverse stress conditions such as low oxygen, toxins, or nutrient starvation. Under these conditions, NSCLC cells used a specialized mechanism, relying on a protein known as eIF5B, to increase PD-L1 production. “EIF5B depletion strongly downregulated PD-L1 expression in Urod knockout cells,” they wrote. Conversely, stimulating cells with this single protein could turn up PD-L1 production, the researchers found, even without tampering with heme synthesis.

When the team then examined data from the Cancer Genome Atlas database, they found that the gene encoding eIF5B is frequently overproduced in lung cancers, and that this overproduction was a marker of poor prognosis for lung cancer patients. "Examination of the Cancer Genome Atlas data revealed that eIF5B amplification or mRNA upregulation occurs in 16% of lung adenocarcinomas (LUADs), and high expression of eIF5B correlates with poor overall survival of human patients with LUAD," O'Donnell and colleagues stated. "… our data pinpoint the alternative initiation factor eIF5B as a key mediator of ISR-dependent PD-L1 translation," they concluded. "These findings suggest that eIF5B may function as an oncogene in human cancer."

The authors say that while their results have pointed to eIF5B as an "unanticipated regulator of PD-L1 immune checkpoint activation," it is likely one of several mechanisms in PD-L1 upregulation in human lung cancers, particularly in context where stress response pathways are involved. "These findings highlight the importance of future studies to examine the complete translational program orchestrated by eIF5B in cancer and evaluate its potential as a therapeutic target," they concluded.

"Developing new drugs that specifically target this protein, or other proteins involved in making PD-L1, could help improve the success of immunotherapy drugs currently in use," said O'Donnell, who is also a member of UT Southwestern's Harold C. Simmons Comprehensive Cancer Center. "Investigating the relationship between stress responses and immune evasion in cancer will be an important priority for future work," added study first author Shruthy Suresh, PhD, a former graduate student researcher.