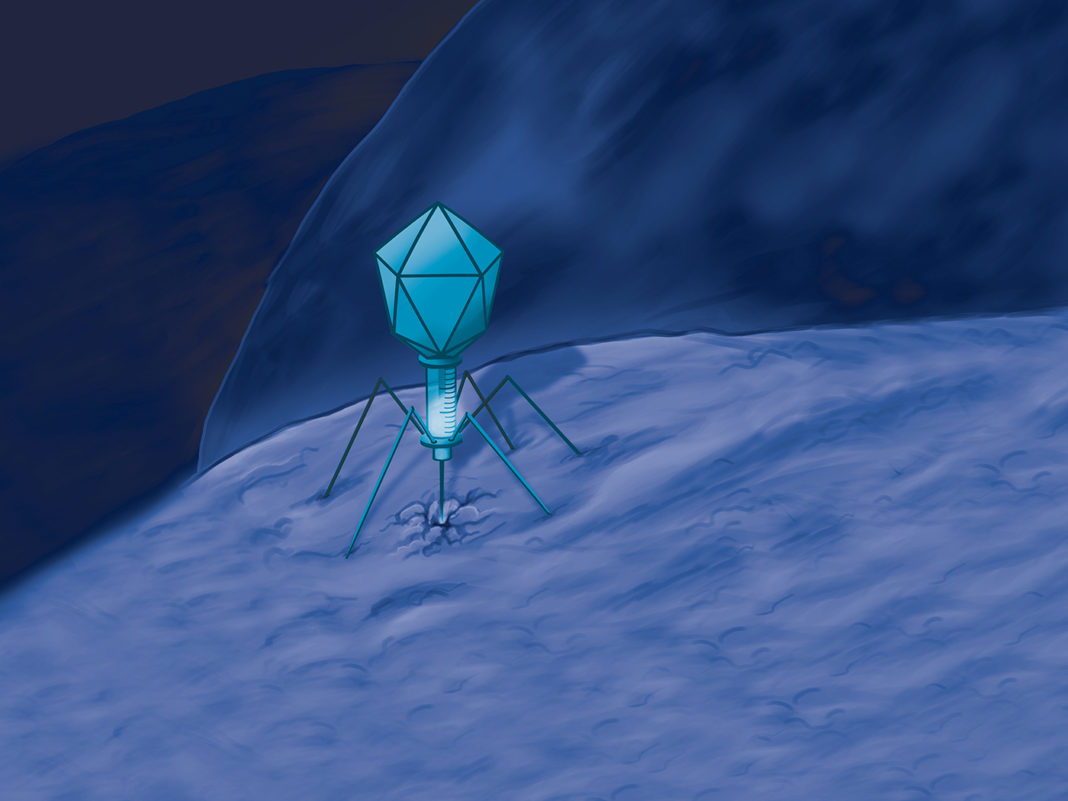 It was 1917 when Felix d’Herelle, at the Institut Pasteur in Paris, first proposed using bacteriophages (or phages)—viruses that infect bacteria—as a therapy for human bacterial infections. Although used for decades in parts of Europe, notably Russia, Poland, and the Republic of Georgia, phage therapy is only permitted in the United States under the “compassionate use” umbrella—when there is nothing else available.

The rise of multidrug-resistant bacteria that defy traditional antibiotics has forced clinicians to seek alternative measures to curb deadly infections. Two cases made headlines in recent years. In 2016, the life of Thomas Patterson, PhD, a professor of psychiatry at the University of California, San Diego, was saved by phage therapy after he developed a deadly Acinetobacter baumannii infection. (The story is recounted in The Perfect Predator, the book that Patterson co-authored with his wife, epidemiologist Steffanie A. Strathdee, PhD.) Last year, the life of an English teenager was saved after she developed an infection following a lung transplant for cystic fibrosis.

Although phage therapy offers a promising way forward, other investigators want to take a more direct approach using only the active ingredient of the phage—the lysins—responsible for killing bacteria.

Phage lysins work by degrading the bacterial cell wall, which is composed of the bacteria-specific molecule peptidoglycan. Different bacteria have different components and organizations of peptidoglycan in their cell walls; different lysins are specific to these structures. Pathogens can have a slightly different composition than similar bacteria that are part of the normal flora. For example, the lysin for the gut pathogen Clostridium difficile will selectively kill C. difficile without harming other Clostridium present in the microbiota.

Around 2010, as awareness of the antibiotic resistance crisis was reaching a fever pitch, alternatives to antibiotics were being sought with a newfound urgency. One of the most promising set of candidates was under investigation in a laboratory on the Upper East Side of Manhattan, where researchers were discovering that lysins could be used clinically.

Vincent A. Fischetti, PhD, the primary developer of the lysin technology, has been on the faculty at the Rockefeller University since 1973. He purified a phage lysin during his thesis work, using it to extract proteins from group A streptococci. Fast forward to the year 2000, Fischetti was, he recalls, “the right person at the right time.” He added lysin to the throats of mice that had been colonized with streptococcal bacteria. The bacteria died, and the idea to use lysins as a therapeutic was born. Fischetti obtained a broad patent, received two grants from the Defense Advanced Research Projects Agency (DARPA), and published a string of papers.

The differences between treating infections with phages and lysins, Fischetti explains, are “night and day.” Lysins are direct and kill instantly, and no resistance has been observed to date. Also, off-target effects are unlikely because peptidoglycan does not exist in mammalian tissue. Lysins are also very stable proteins—they can be frozen and lyophilized, and they are heat stable up to about 50°C.

Moreover, lysins can infiltrate a biofilm, a bacterial community that normally offers bacteria extra protection from antibiotics. When biofilms are treated with antibiotics, only the organisms on the surface of the matrix are killed. In contrast, lysins dissolve biofilms from the top down. The bacteria burst open, revealing the next layer of the biofilm, making it vulnerable to further lysin exposure.

Graham Hatfull, PhD, a professor at the University of Pittsburgh specializing in phage biology, says there are vast numbers of different lysins, each with specific cell wall targets, creating a huge space for discovery and development. The lysins are relatively cheap and easy to produce. For several Gram-positive bacteria—which have only a single membrane located interior to the cell wall, giving lysins direct access to the peptidoglycan targets—good antibacterial activity has been shown in vitro. In short, Fischetti says, “They work.”

With the success of phage therapy in a couple of high-profile cases in recent years and the numerous advantages on paper of lysins as antibacterial drugs, one might ask: Why haven’t lysins received the same attention from the biopharma industry?

One reason is that the research did not leave Rockefeller University until about 10 years ago. That’s when Yonkers, NY-based biotech Contrafect approached Fischetti about licensing the technology to develop lysins as a therapeutic. Raymond Schuch, PhD, a research assistant professor in Fischetti’s lab at the time, joined Contrafect, where he is now vice president of research.

Schuch tells GEN that he made the move to Contrafect because it opened a whole new area of translational research that “we usually don’t think about in research laboratories.” Schuch continues: “We spent years identifying these lysins, defining their characteristics, showing that they confer therapeutic benefits in animals.” He wanted “to continue along the pathway of the development.”

Over the past decade, the small company of 25 employees has taken the Staphylococcus aureus lysin Exebacase into the clinic, completing Phase I and Phase II of a trial. Contrafect is currently enrolling patients in Phase III. This is the first and only lysin to enter human clinical trials in the United States. The data showed that Exebacase, given in combination with antibiotics, improved clinical outcomes in patients with Staphylococcus aureus bacteremia, including endocarditis, when compared to antibiotics alone.

Although Exebacase is further down the clinical trial pipeline than any phage therapy in the United States, phage therapy has attracted all the public attention. Few have heard of lysins. “I don’t really know why,” remarks Fischetti. “That’s the problem.” One reason may be that lysins have not yet been approved for use in the compassionate care cases that tend to garner attention. When asked if there are any known disadvantages to using lysin over phage, Fischetti is adamant: “There are none.”

One of the major problems with phage therapy is the ability of bacteria to develop resistance, similar to the resistance that is rampant with antibiotics. In the recent cases where phages were used for compassionate care, the medical teams opted to use a cocktail approach, believing that one or even two phages could lose efficacy at some point due to the onset of bacterial resistance.

For example, in the case last year of the 15-year-old cystic fibrosis patient Isabelle Carnell-Holdaway, who was treated for a disseminated Mycobacterium abscessus infection, three phages were used. Hatfull, who supplied the phages, says, “Three was a number that gave some confidence that we wouldn’t see resistance.” The more phages, he notes, “the more effectively you can counter that concern.” 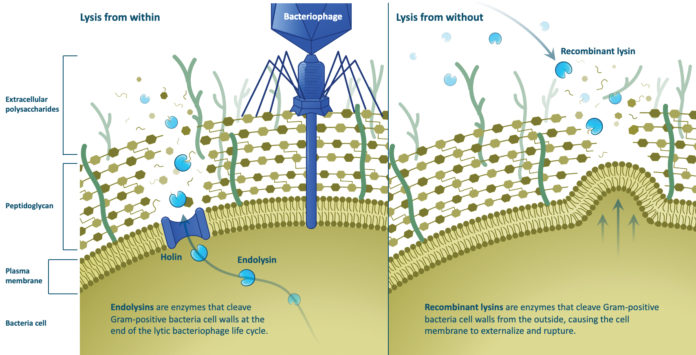 Hatfull observes that lysins, unlike phages, are associated with “very low or even undetectable levels” of bacterial resistance. This, he maintains, is “a major advantage.”

Why is resistance not a problem for lysins? Fischetti says that “it’s keyed into the way that [the phages] have evolved.” Lysins are essential for the survival and release of the phage. Their target is a critical component of the bacterial cell wall that is essential and cannot be changed easily. For this reason, lysins tend to retain their potency against bacteria, which find it far more difficult to acquire resistance to phage lysins than to phages or antibiotics.

Fischetti has recently teamed up with Lumen Bioscience, a Seattle-based company founded in 2017 with technologies for bioengineering spirulina, a photosynthetic microbe consumed worldwide as a nutritional supplement and food source. The blue-green algae can allow lysins to be produced for a fraction of the cost associated with conventional techniques. In fact, Fischetti asserts that algae can take the cost of lysins “down to pennies a dose.”

Producing lysins traditionally requires a biomanufacturing system and complicated purification processes. Algae are extremely easy to grow in enormous quantities (they grow in tap water), and they are the only microbes that can be commercially farmed at these scales.

Brian Finrow, the CEO of Lumen, tells GEN that the Fischetti laboratory will generate the lysins and that Lumen will carry out the protein engineering and other activities to create therapeutic strains of spirulina and carry those forward to FDA-supervised clinical trials.

Fischetti says that the spirulina could be used as a “lysin factory,” producing large quantities of lysin to be purified. But it is not implausible that someone could eat spirulina that is expressing lysin to have the enzymes coat their intestinal tract. He adds that this technology and collaboration opens interesting possibilities for lysin, including moving into the veterinary field. (As they are currently made, lysins are too expensive to be used for veterinary purposes.)

Hatfull is a proponent of phage therapy, but he says that “the proof-of-principle studies [using lysins] are encouraging.” As with every young field, there are many unresolved questions. Will lysins be able to access niches of bacterial infection in vivo, as these enzymes are larger than typical antibiotic molecules? And although the early data in Contrafect’s clinical trial regarding the host’s immune response look promising, might immune responses to the lysin limit their action in patients for extended or repeated periods?

In addition, the utility of lysins for Gram-negative pathogens remains unclear because of the need to get the lysins past the outer bacterial membrane. Gram-negative bacteria, in contrast to Gram-positive bacteria, have a second membrane located exterior to the cell wall, making access to the peptidoglycan layer more challenging. Fishcetti’s laboratory is working on this problem: the team has lysins that, when modified, can get past the outer membrane. But development of the Gram-negative lysins is behind the development of the Gram-positive lysins.

Phage and bacteria have been evolving together for a billion years, Fischetti explains. They have been battling back and forth, building systems so that nobody loses—and nobody wins—because “whoever wins, loses.”

Phage therapy is trying to take a billion-year-old, established system, where nobody is supposed to win and force the phages to win, notes Fischetti. He adds, “That is not going to happen easily.” One challenge is that we lack a full understanding of the mechanisms of bacterial resistance. “We know about CRISPR,” he says, “but we don’t know about all of the other bacterial defense systems against phage.”

Fortunately, resistance to lysins has not been seen in the 20 years of working with them. Bacteria have built up resistance to both phages and antibiotics, but “they don’t know how to handle a lysin,” notes Fischetti. The lysins, he says, “take the bacteria by surprise.” Fischetti notes that his laboratory tries to force resistance. Doing so is proving to be difficult. If resistance is difficult for scientists to achieve in the laboratory, it may also be difficult for bacteria to achieve in nature.

Lysins could buy us time (maybe decades) by killing antibiotic-resistant bacteria until new methods are discovered, Fischetti speculates. Using lysins, he adds, is simply taking advantage of something that phages have figured out—of something that has helped them survive—and using it to our own benefit.