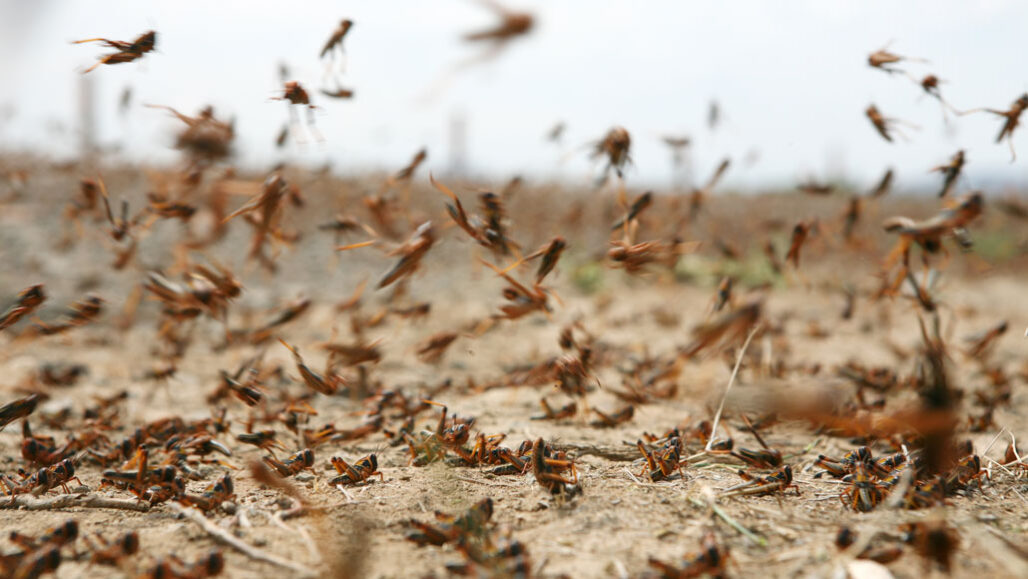 Locusts are usually harmless loners. But together, they become plagues.

When conditions are right, solitary locusts begin congregating and transmogrifying into their “gregarious” form, becoming a bigger, more aggressive eating machine. These groups can grow into ever-larger conglomerations, potentially hundreds of millions strong, that cross continents and destroy crops. A swarm of desert locusts (Schistocerca gregaria) the size of Rome consumes as much food in a day as all the people in Kenya. This year, East Africa is experiencing its worst locust plague in decades.

Now, scientists have pinpointed a compound emitted by congregating locusts that might explain how individuals of one widespread species overcome their innate aversion to socializing. The finding, described August 12 in Nature, could inform new ways of controlling or preventing locust swarms, potentially by attracting the insects with their own scents.

“It’s a significant and exciting study,” says Baldwyn Torto, a chemical ecologist at the International Centre of Insect Physiology and Ecology in Nairobi, Kenya who wasn’t involved in the study. “We don’t have great ways of baiting locusts. This [compound] has potential.”

Scientists weren’t sure what coaxes solitary migratory locusts (Locusta migratoria) to congregate, but suspected what are known as aggregation pheromones. These airborne chemicals released by the insects could act as an olfactory beacon, summoning other normally solitary locusts to a swarm and initiating the transformation to more gregarious behavior (SN: 3/28/01).

Le Kang, an entomologist at the Chinese Academy of Sciences in Beijing, and colleagues began their search for aggregation pheromones by identifying compounds emitted only by gregarious locusts. The team puffed six of these gregarious-only scents into arenas along with control scents to test whether any acted as attractants for solitary locusts. One compound, 4-vinylanisole, or 4VA, did the trick. It proved alluring to locusts of all sexes and ages, including both solitary and gregarious forms.

That’s crucial, Torto says, because it demonstrates that 4VA could function to both bring solitary locusts into the fold of the swarm, as well as maintain a swarm’s cohesiveness over time.

Gregarious locusts start emitting 4VA once they gather in groups as small as four or five individuals, Kang found. As group size grows, 4VA concentration shoots up, potentially broadcasting a larger signal and contributing to the exponential growth of swarms.

Kang and colleagues confirmed that 4VA can attract locusts in the real world by setting sticky traps baited with the pheromone. On both artificial turf and a natural breeding area of migratory locusts in northern China, 4VA traps attracted more locusts than controls, though the effect was modest in the field and the researchers tested attractiveness only at short-range.

4VA is clearly a player, Torto says, but it may not be the whole story. Chemical communication among insects isn’t always monosyllabic, with a single compound changing a behavior wholesale. Multiple compounds often work together, which this study didn’t address. He says there’s a chance that the background odors of gregarious locusts could interact with 4VA to amplify the aggregation signal.

Still, the prospect of baited traps for locust control excites Torto. “We don’t have a good way of attracting locusts,” he says. Traps laced with 4VA could concentrate locusts and make treatment with insecticides or pathogens much easier, especially if 4VA acts as an attractant in other species as well, like the desert locust. Currently, many regions manage outbreaks by dumping pesticides on swarms from aircraft, which can harm livestock and the environment.

This study also opens the door for other control measures that alter the biology of locusts themselves. Kang and his colleagues identified the protein that detects 4VA, nestled on specific sensory hairs that extend from the antennae. The researchers used the gene editing technology CRISPR/Cas9 to disable this 4VA detector, finding that genetically altered individuals were no longer attracted to 4VA.

A compound that blocks antennae from sensing 4VA could be sprayed on locusts to prevent swarming, the researchers suggest. Alternatively, locusts genetically engineered to lack this 4VA detector, and thus less likely to swarm, could also be introduced into populations as a control measure.

“Anything that leads to a potential new management technology, especially one that can decrease reliance on synthetic pesticides, is really exciting,” says Arianne Cease, a sustainability scientist at Arizona State University in Tempe. But such technologies are still a ways away and could have off-target effects that would need to be better understood, she says. Further, changing the genetic makeup of a species also has ethical consequences that would need to be weighed by those who might be affected, from farmers to conservationists.

She’s also skeptical that simply turning off a gene would effectively prevent swarms. Becoming a swarm involves a whole set of radical changes to behavior, metabolism and body size (SN: 1/29/09). Tweaking one aspect of this transformation may not prevent it, she says. “I’d be surprised if there were just one smoking gun.”