Last month, the US Patent and Trademark Office reignited the infamous CRISPR patent dispute when it declared interference—overlapping intellectual property—between several pending patents belonging to the University of California and patents already awarded to the Broad Institute of MIT and Harvard University.

The legal battle between the Broad and the University of California (UC) over CRISPR-related intellectual property (IP) has been raging for years. The patents cover the use of the CRISPR-Cas9 system for gene editing in eukaryotic cells—for which the Broad was awarded a foundational patent by the US Patent and Trademark Office (USPTO) in 2014. At the time, UC called for an interference hearing, claiming that Broad’s patent overlapped with one that UC Berkeley, the University of Vienna, and Emmanuelle Charpentier (formerly at the University of Vienna) had filed for two years earlier.

The USPTO had initially ruled in favor of the Broad, stating that there was no interference, but has flip flopped with the recent decision. In the meantime, UC was awarded the patent that was involved in that case.

"The patent dispute is important, because it lays claim to ownership over a pretty broad foundational aspect of the technology,” says Jacob Sherkow, a professor at New York Law School. One of the reasons that these specific patents are worth fighting for, he adds, is because they refer to uses of a CRISPR system that combines single molecule guide RNAs with the Cas9 protein, which remains the top choice for human therapeutic applications and is currently being tested in clinical trials. “Those patents are worth a lot of money,” Sherkow tells The Scientist.

Still, the interference ruling only covers one region of the current CRISPR patent landscape. Hundreds of CRISPR-related patents have been granted around the world, and there are thousands of pending applications. They cover a wide variety of claims, including those associated with the gene-editing system’s components, such as the DNA-cutting endonucleases, and its applications—for instance, its use as a nucleic acid–detecting diagnostic tool.

Many CRISPR patents have been awarded to UC and the Broad, two of the biggest players in this space. The USPTO and the European Patent Office (EPO) have awarded 34 patents to the Broad and 10 patents to UC. Both institutions also hold patents in other parts of the world, including Australia, Japan, and China. (The USPTO's recent inference ruling applies to 13 patents and one patent application at the Broad and 10 patent applications at UC.)

The patents that have been issued to UC—and several more that will be coming down the pike in the next few months—cover a wide variety of claims, according to Ellison. Many of these pertain to specific components of the CRISPR systems, such as the use of different guide and tracrRNAs or modifications to the CRISPR enzymes (for example, “nickases,” CRISPR proteins modified to cut a single strand of DNA).

"When you invent this sort of foundational platform, one of the goals is to consider numerous ways that the invention can be used so that you can get patent coverage that’s commensurate with what you’ve invented,” says Eldora Ellison, UC’s lead CRISPR patent strategist and a director at the IP law firm Sterne, Kessler, Goldstein & Fox.

Ellison notes that UC is particularly excited about the foundational patent it received in April, which was involved in the original patent interference proceedings and covers the use of CRISPR-Cas9 to modify DNA in any cellular or non-cellular environment. "We're also quite pleased with the impending issuance of patents that are directed to single-guide RNA as compositions of matter,” Ellison adds. ("Composition of matter” patents cover newly synthesized molecules or compounds.) What both types of patents have in common is that they "provide nice broad coverage" in terms of potential uses, Ellison tells The Scientist.

The Broad has a similarly diverse CRISPR patent profile. "The full breadth of inventions disclosed in [the Broad’s] portfolio also includes applications not only to CRISPR-Cas9,"Karen Zusi, the media relations manager at the Broad, writes in an email to The Scientist. These include CRISPR-based nucleic acid detection tools such as SHERLOCK and other applications based on alternative endonucleases, such as Cas12, Cas13, and Cpf1, as well as CRISPR-associated transposases (CAST).

Competition over CRISPR patents is intense because biotech companies and academics working to develop new commercial applications of CRISPR first need to obtain licenses from the owners of the IP before using their inventions. Scientists can utilize these technologies for basic research purposes without paying royalties, but they too need to obtain licenses if they want sell the results of that work. Some have estimatedthat the global CRISPR market will be worth more than $5 billion by 2025.

UC and the Broad are not the only ones that have acquired CRISPR patents—many other academic institutions and biotechnology companies are also in the CRISPR business. According to data gathered by the Switzerland-based consulting firm IPStudies, more than 12,000 CRISPR patent applications have been filed worldwide. These fall into approximately 4,600 patent families, which encompass all patents filed for one invention in different countries. Other than the Broad and UC, institutions with applications falling into the largest number of patent families include the Chinese Academy of Sciences, the US chemical company DuPont, and the Massachusetts-based genome editing company Editas Medicine, cofounded by members of both the Broad and UC teams, among others. 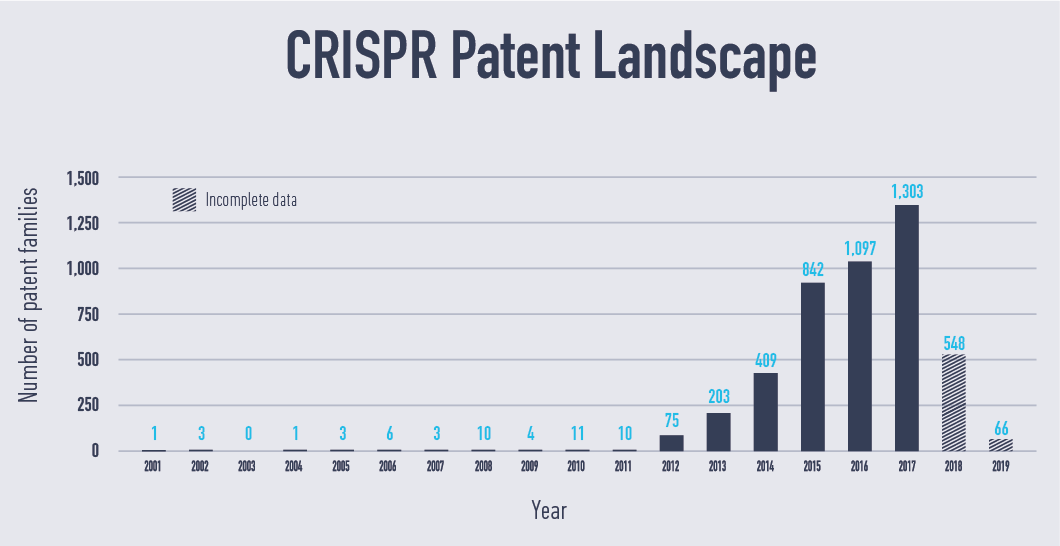 Number of applications for new patent families filed worldwide, according to data collected by IPStudies. The data from 2018 and 2019 are incomplete; due to a lag in the publication of US patent filings, most of the tallied applications are in China.

Of these thousands of patent applications, more than 740 CRISPR patents have been issued to date—and more than half of those have been granted in just two countries, according to IPStudies. "China and the US are definitely dominating the CRISPR patent landscape," says Corinne Le Buhan, the founder and principal consultant of IPStudies. "Especially on the academic side of this." One reason for this, she notes, may be the general aversion toward genetically-modified organisms (GMOs) in Europe, which limits advances in agricultural applications.

Over the years, there has been an increasing diversification of the CRISPR portfolio beyond Cas9, says IPStudies analyst Fabien Palazzoli. "Now, we have around 50 different types of CRISPR enzymes," including Cpf1, C2c2, CasX, and CasY. One potential motivation for developing all these alternatives, Palazzoli adds, might have been the ongoing legal issues surrounding the ownership of the Cas9 system.

Gregory Graff, an economist at Colorado State University, points to additional reasons for the diversification of the technology, such as researchers’ drive to pursue new scientific advances and biotech companies’ desire to obtain the freedom to use their own tools. "There are also a number of other forces at play that would have occurred [regardless of the dispute],” he tells The Scientist. “Some of it has been the IP motivation, but I think a lot of it has been the fundamental curiosity [of scientists]."