what are the popular applications of CRISPR library?

CRISPR library is a high-throughput gene screening method based on CRISPR/Cas9 technology. Construct a plasmid library by high-throughput synthesis of sgRNA, package it as lentivirus, and then infect the cells with low MOI (usually < 0.3), to ensure that only one sgRNA enters a cell, and then screen the cells (such as drug treatment, hypoxia treatment, virus infection or the self viability of the cells), collect the screened cells for NGS sequencing, and analyze the enrichment or depletion of sgRNA between the experimental group and the control group, then obtain host factors related to the screening condition.

Compared with cDNA library and RNAi library, CRISPR/Cas9 has the advantages of versatility, low noise, high knockout efficiency, and less off-target effect, and is the preferred method for large-scale gene function screening.

In addition to the unique advantages mentioned above, the broad application prospect also contributes to the popularity of CRISPR library. Here are a few common applications.

1）Identify essential genes of tumor and target oncogenes for treatment

Malignant tumor accumulates many gene mutations, but the maintenance of malignant phenotype of these tumor cells usually depends on only one or some of the oncogenes activated by mutations. This phenomenon is called oncogene addiction, and these oncogenes are also called driver oncogenes. Blocking the activity of these driver oncogenes can induce tumor cells to rapid apoptosis, growth arrest or differentiation, but with little impact on normal cells. This difference brings hope for targeted therapy of tumors.

In recent years, the extensive application of second-generation sequencing has identified many mutation loci in tumor cells, but it is difficult to distinguish which are driver mutations. It is a simpler and more direct method to find out the driving oncogenes that tumor cells depend on for survival by gene inactivation. CRISPR library can simultaneously target different genes throughout the genome, which is an excellent tool to achieve high-throughput gene inactivation. In 2014, Shalem et al. [1] first identified the key genes for the survival of human melanoma cells and pluripotent stem cells using the GeCKO Library (Fig. 1). Wang et al. [2] identified NCAPG as an essential oncogene for hepatocellular carcinoma tumor growth by CRISPR whole genome library screening. Kiessling et al. [3] verified the driving genes EGFR of HCC-827 cell line and NRAS and MEK1 of CHP-212 cell line by using CRISPR whole genome library screening, and found new driving genes TBK1 and TRIB2 for further research.

For oncogenes, inhibitors can be used for targeted therapy, but for tumor suppressor genes, the inactivation of their functions makes it impossible to directly target them. So the synthetic lethality gene of the suppressor gene is usually targeted and inactivated. Synthetic lethality refers to the phenomenon that two non-lethal mutant genes inactivate at the same time leading to cell death. If there is inactivation of gene A in tumor cells, drugs can be used to inhibit its synthetic lethality gene B. By inactivate both genes in tumor cells, cell death would occur. However, healthy somatic cells can still have normal physiological functions because they have normal gene A. Thus, the drug specifically kills tumor cells (see Fig. 2) [4]. 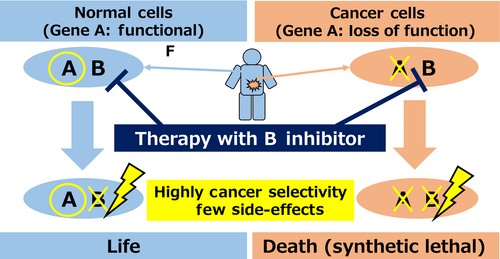 Vemurafenib is approved for the treatment of advanced melanoma carrying the BRAFV600E mutation. In order to study the drug resistance mechanism of Vemurafenib, Shalem et al. [1] designed a knockout library containing 64751 sgRNAs and targeting 18080 genes in the whole genome. After cell infection and expansion, nf1, med12, nf2, cul3, tada2b, tada1 and other drug resistance related genes were screened out. A new hypothesis of the mechanism of Vemurafenib tumor resistance was proposed.

CRISPR library screening is often used to study host factors related to viral infection. For hepatitis C virus, dengue virus, Japanese encephalitis virus and West Nile virus, a number of host factors related to endoplasmic reticulum function and receptors have been screened out. For example, Zhang et al. [7] verified nine human genes required for flavivirus infection through genome-wide screening of CRISPR/Cas9, all of which are related to endoplasmic reticulum (ER) functions (including translocation, protein degradation and N-linked glycosylation). Ma et al. [8] screened the whole genome by designing a library containing 77406 sgRNAs and targeting 20121 genes, and then obtained seven genes belong to the endoplasmic reticulum related protein degradation pathway (ERAD), such as EMC2, EMC3 and SEL1L. Further experiments showed that knockdown of these genes would not prevent the replication of West Nile virus (WNV), but would prevent the virus from killing cells.

It is quite simple to use peptides or purified proteins to verify antibodies in immune experiments, but it is relatively difficult to use the whole cell or other complex antigens to verify antibodies. If the reactivity of the antibody is not detected in Western blotting and immunoprecipitation, it is necessary to apply a variety of techniques at the gene level to determine the antigen specificity of the mAb. The application of CRISPR library can reduce many operation steps and simplify the experiment. BF4 is an antibody that can bind to the viral biofilm on the surface of uninfected lymphocytes, neutrophils and HTLV-1 infected cells. Zotova et al. [4] used MT2 cells (T cells chronically infected with human T-cell lymphotropic virus type I HTLV-1) as immunogens to trigger mouse immunity and obtained a HTLV-1 biofilm specific monoclonal antibody BF4. Based on the idea of screening BF4 antigen knockout cells by transducing CRISPR knockout library into BF4 positive cells, they transduced GeCKO library on CEM T and Raji/CD4 B cells to sort out cells that do not bind to BF4. After two rounds of repeated sorting, the proportion of negative cells reached more than 99%. Researchers sequenced these cells and found that about 80% of sgRNA targeted CD82. BF4 was confirmed to be a specific antibody against CD82. 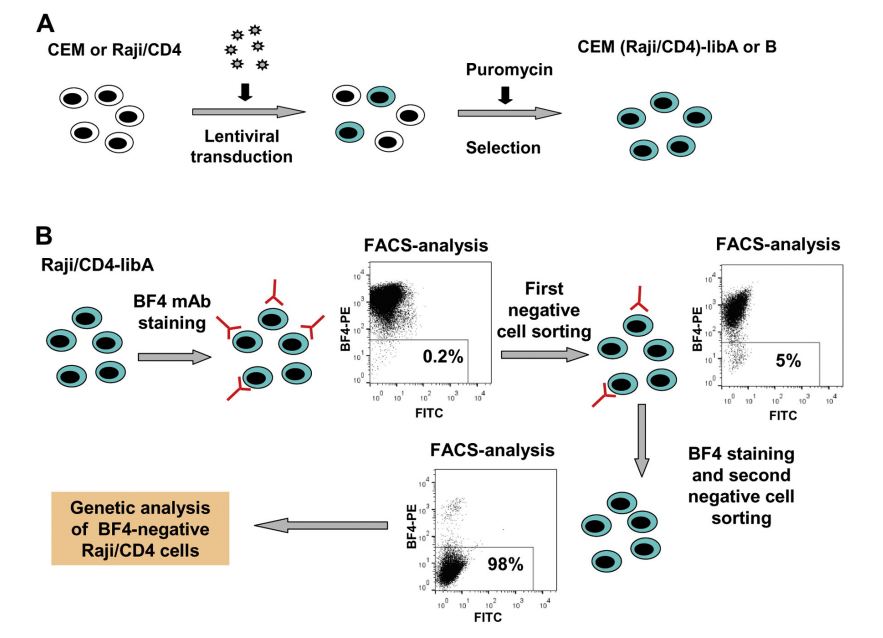 Pyroptosis is an immune defense reaction initiated by the body after sensing the infection of pathogenic microorganisms. Inflammation activated caspase-1 and caspase-4, caspase-5 and caspase-11, which recognize bacterial lipopolysaccharides, can cause cell pyroptosis, but the mechanism remains unknown. Shi et al. [5] first established a lipopolysaccharide (LPS) electrotransformation method that can induce more than 90% cell pyroptosis, and then transduced a CRISPR knockout library into Tlr4–/– bone marrow-derived immortalized macrophages (iBMDMs) that can normally respond to lipopolysaccharide stimulation, and sequenced and analyzed the cells that survived after lipopolysaccharide induced cell pyroptosis. The analysis results showed that among the five sgRNAs targeting the gasdermin D (GSDMD) gene, four had copy numbers in the top 30, of which two were in the top 10. The subsequent results also further proved that the N-terminal of GSDMD could induce cell pyroptosis. To sum up, the researchers used CRISPR gene library to carry out genome-wide genetic screening, successfully screened the gene GSDMD that can inhibit cell pyroptosis after knockout, and clarified the molecular mechanism of GSDMD as an inflammatory caspase substrate protein that can trigger cell pyroptosis after being cleaved. 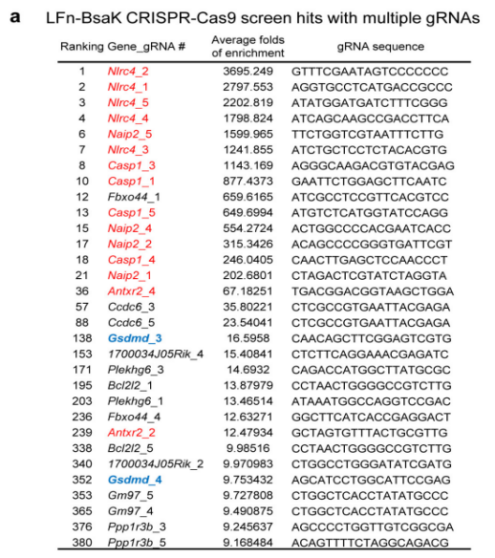 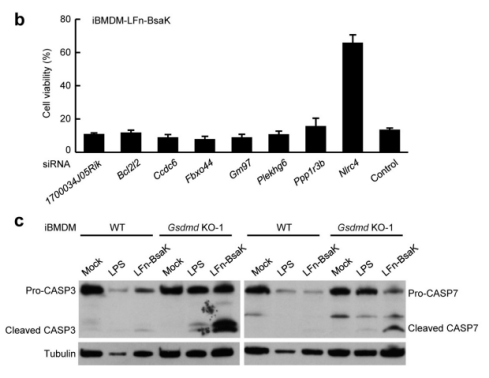