circRNAs are circular noncoding RNAs formed by reverse splicing of pre-mRNAs. circRNAs were firstly found in viruses in the 1970s. However, due to the extensive use of the method for enrichment of poly (A) (no 5 'and 3' ends of circRNA) in the early RNA library preparation, and the calculation algorithm that RNA-seq reading requires linear alignment with genome, a large number of circRNA information was omitted, which led to the belief that circRNA is just a byproduct of miss splicing.
With the development of high-throughput sequencing technology and bioinformatics, thousands of circRNA have been found, and more and more basic researches related to circRNA have been done. A large number of studies have shown that circRNA is endogenetic, abundant, conservative and stable in mammalian cells, and often shows tissue or space-time specificity. It can participate in the regulation of cell growth and development, as well as the occurrence and development of diseases through a variety of mechanisms. Therefore, in recent years, circRNA has become popular in the field of non-coding RNA research.
circRNA related services in Ubigene:

what is circRNA
Mechanisms of circRNA formation
According to the origin of circRNA, it can be sorted into three types:
· Exonic circRNAs: All sequences are derived from exons.

· EIciRNAs: Sequences are derived from exons and introns.

· ciRNAs: All sequences are derived from introns.

Mechanisms of circRNA formation
circRNA is formed by the pre-mRNA by back splicing. At present, there are three kinds of mechanisms reported as follows:
· Intron reverse complementary sequence 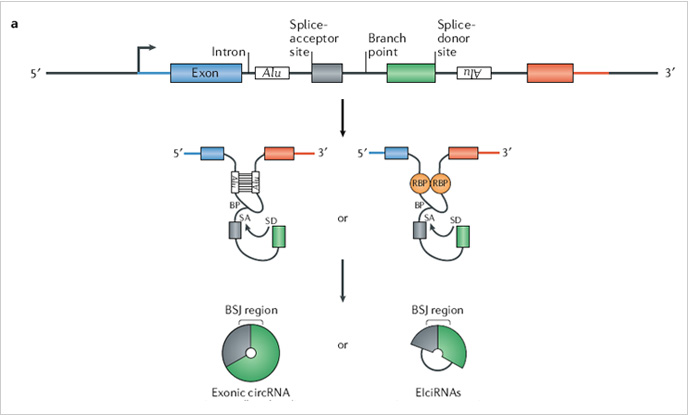 When the pre-mRNA is spliced, exon skipping occurs, which results in the formation of a lariat intermediate containing exon and intron. Then the intermediate is back spliced to form a circRNA. (Fig 2.) 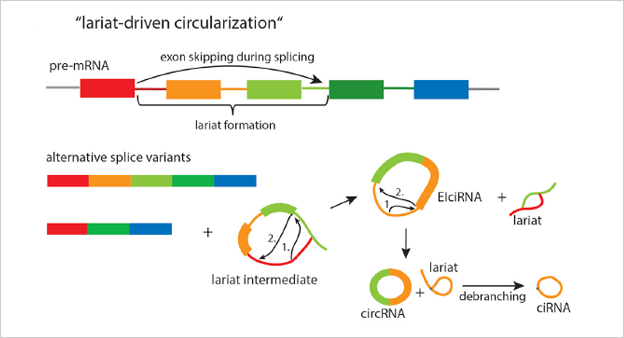 Functions of circRNA
The most common function of circRNA is to bind to miRNA as miRNA sponge, thus affecting the regulation of miRNA on genes.（Fig 3.） 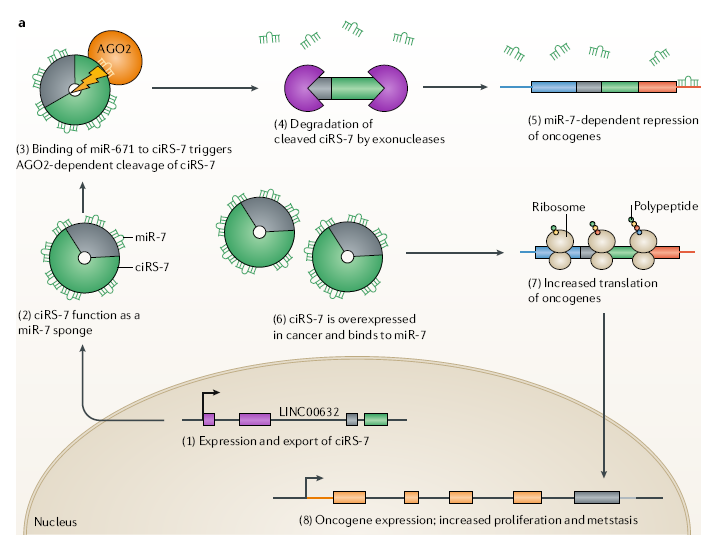 Many circRNAs contain protein binding sites, which can be used as protein sponges. In addition to being miRNA and protein sponge, circRNAs can also be used as a scaffold protein to promote the co-location of enzyme, to inhibit the target gene expression by binding transcription factors, to participate in the regulation of parent gene expression, and to translate polypeptides under specific circumstances. According to the different functions, the locations of circRNAs are different. For example, as a miRNA or protein sponge, circRNA needs to be transported from the nucleus to the cell matrix to play a role. When participating in the regulation of parent gene expression or binding transcription factor to inhibit the target gene, circRNA often plays a role in the cell nucleus.
Reference：
Kristensen, L. S., Andersen, M. S., Stagsted, L. V., Ebbesen, K. K., Hansen, T. B., & Kjems, J. (2019). The biogenesis, biology and characterization of circular RNAs. Nature Reviews Genetics, 20(11), 675-691.
CircRNA knockout
At present, the most studied is the relationship between circRNAs and tumors. Some circRNAs promote tumor formation, such as circPvt1 in squamous cell carcinomas of the head and neck, cirs-7 (CDr1as) in colorectal cancer, esophageal squamous cell carcinoma and hepatocellular carcinoma. Some circRNAs suppress tumors, such as circsMARCA5 and circ-SHPRH in glioblastoma. Some circRNAs may play different roles in different tissues or cells, such as circHiPK3, which is a proto-oncogene in rectal cancer, but suppresses cancer cells in bladder cancer.
In addition to cancers, circRNA has been found to be closely related to diabetes, cardiovascular disease, chronic inflammation and nervous system diseases. It is believed that with the development of biotechnology and more in-depth researches on circRNA, the formations and mechanisms of circRNAs can be identified. circRNAs can play important roles in disease prevention, diagnosis and treatment discovery.
circRNA knockout refers to editing at the level of DNA to achieve the purpose of a complete knockout. gRNA and Cas9 would be transferred into cells by virus transduction or nucleofection. After drug screening, single clones would be generated. Positive clones would be validated by sequencing.
The most common strategies for circRNA knockout：

The most commonly used method is to design two gRNAs at both ends of the circRNA exon to knockout the whole cyclized exon sequence. Although this strategy can knockout the circRNA, it will also affect the parent gene encoding the protein, and the study on its function is not ideal.

The ideal method is to knockout the loop forming elements (Alu) in the flanking intron of the exon, so as to destroy the circRNA loop forming without affecting the expression of the coding gene.（Fig 4. 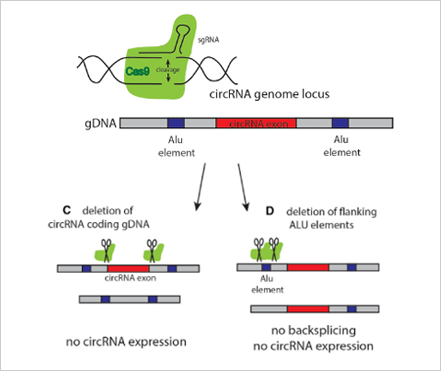 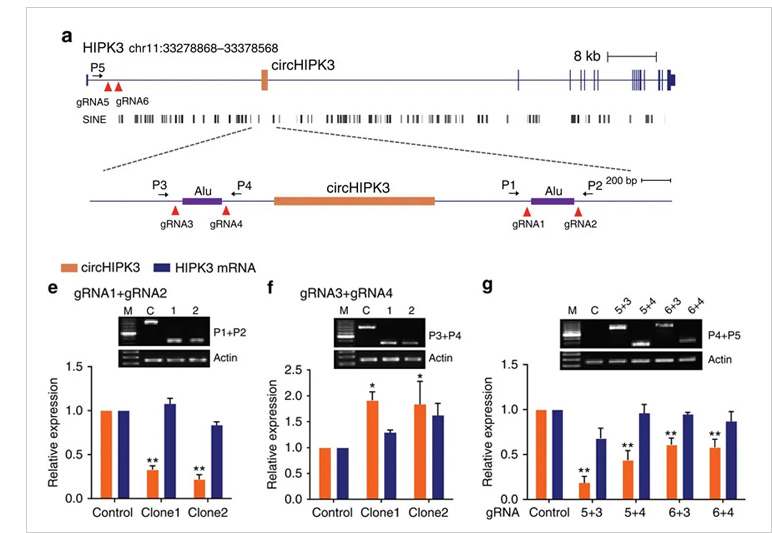 Reference：
Zheng, Q., Bao, C., Guo, W., Li, S., Chen, J., Chen, B., ... & Liang, L. (2016). Circular RNA profiling reveals an abundant circHIPK3 that regulates cell growth by sponging multiple miRNAs. Nature communications, 7(1), 1-13.
CircRNA knockdown (RNAi)
Among the methods to study the function of circRNA, the most classical way to inhibit circRNA is to knockdown it by RNAi (shRNA or siRNA). In order to avoid affecting mRNAs of coding genes, the shRNA should be designed at the back splicing site (BSS).
Ubigene can design high-score shRNA and use lentivirus to transfer the RNA interference vector into the cells. Cells were screened according to the drug screening, and the stable cell lines with circRNA knockdown were obtained.
Case study： 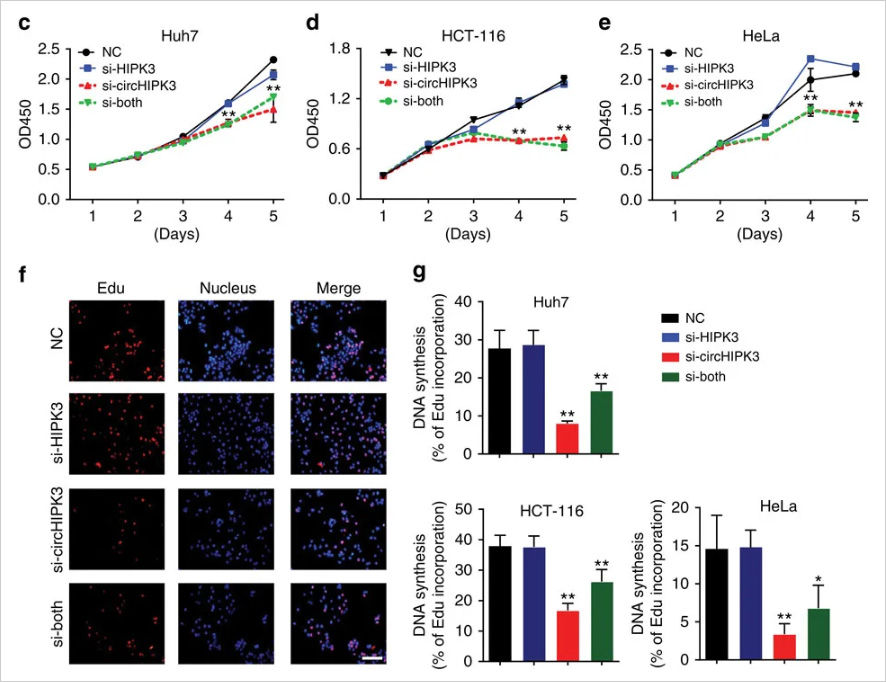 Reference：
Zheng, Q., Bao, C., Guo, W., Li, S., Chen, J., Chen, B., ... & Liang, L. (2016). Circular RNA profiling reveals an abundant circHIPK3 that regulates cell growth by sponging multiple miRNAs. Nature communications, 7(1), 1-13.
CircRNA overexpression
Overexpression of circRNA is not easy because of its low efficiency of loop forming, and it is easy to mismatch. By optimizing the binding sites of RBP, such as Alu elements and QKI, the circRNA can be formed accurately and efficiently. After overexpression, it is necessary to detect successful loop-forming and linear mRNA expression. In order to study the loop-forming efficiency of a new circRNA expression system, the mouse circrtn4 gene was selected to express in a variety of cell lines (including HeLa, N2a, HEK293). According to the RT-qPCR results in different cell lines, the efficiency of the new vector system pCircRNA-DMo-Rtn4 is much higher than that of the common vector system (pCircRNA-BE-Rtn4) in these cell lines.

CircRNA testing and identification
Northern blotting is the gold standard for the detection of circRNA, and probes are usually designed across back splicing sites. However, due to the large amount of circRNA required by Northern blotting, which takes time and energy, and the probes are generally radioactive markers, it is difficult to handle. RT-PCR or RT-qPCR are the common detection methods as well, and the primers are designed at both ends of the back splicing site. (Fig 9) 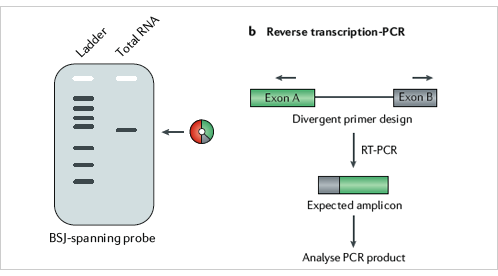