In the year 2019, more than 15,000 publications are using CRISPR/Cas9 mediated technology.CRISPR/Cas9 has been called the biggest biotech discovery of the century. This gene-editing tool has already revolutionized biology research in the lab, making it easier to study disease and faster to discover drugs. The following are the 4 must-have applications about CRISPR/Cas9. 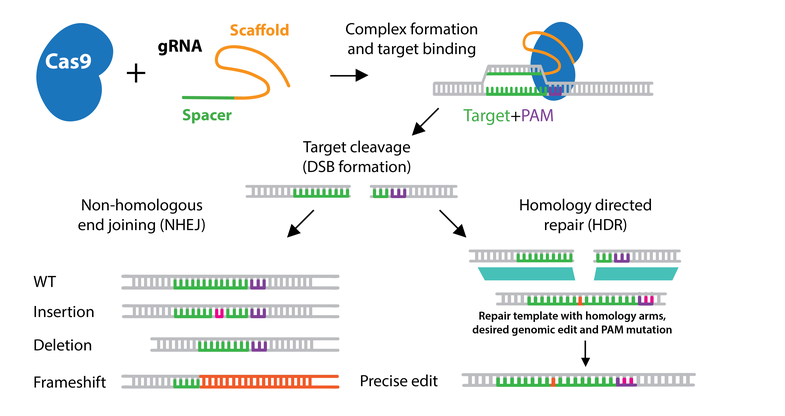 NHEJ is one of the repair mechanism. In the process of NHEJ repair, nucleotide will be randomly introduced or deleted, resulting in the deletion or insertion of nucleotide, thus causing a frame-shift mutation, resulting in gene knockout.

Other than frame-shift mutation, the complete removal of the target fragment is also possible when the sgRNAs are targeting the 5' flanks and 3' flanks of the target exon.

Cas9 and gRNA complex cause a DSB on the target site of DNA. Donor oligo carrying point mutation is the template for homologous recombination repair （HDR）。 The donor sequence replaces the wild-type sequence and causes point mutation.

Homologous recombination repair （HDR） is another repair mechanism. The donor vector carrying knockin sequence is the template for HDR, and it recombines to the target site, inserting a sequence （e.g. GFP, Flag, HA…） in a certain locus.

In the process of CRISPR/Cas9 gene-editing cell lines, the efficiency of plasmid transfection and the ability of single-clone generation are the main factors in the success of gene editing.

Ubigene developed CRISPR-UTM （based on CRISPR/Cas9 technology） which is more efficient than general CRISPR/Cas9 in double-strand breaking, and CRISPR-U can greatly improve the efficiency of homologous recombination, easily achieve knockout （KO）， point mutation （PM） and knockin （KI） in vitro and in vivo. With CRISPR-U, Ubigene has successfully edit genes on more than 100 cell lines.

Now we are having a New Year Sales! Start your year off right by working with us!