Human embryonic kidney 293 (HEK293, HEK-293, or HEK) cells are one of the most common cell lines used for research purposes, second only to HeLa cells. Their popularity is due to several properties such as easy maintenance, robustness, and ease of transfection. 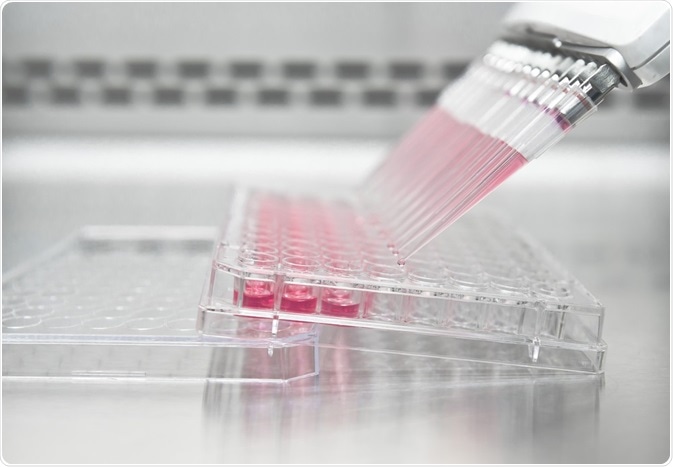 The history of HEK293 cells

The HEK293 cell line was initially produced in 1973 by a team led by Alex van der Eb in Leiden (Netherlands) from normal fetal human embryonic kidney cells. These cells were created following transfection with sheared adenovirus 5 DNA, leading to the incorporation of some of the adenoviral genome into the human chromosome 19 of the fetal cell’s genome. The name 293 comes from the fact that it was Frank Graham’s (one of van de Eb’s postdoc) 293rd experiment.

These cells were initially thought to originate from an endothelial, epithelial, or fibroblastic cell from the fetal kidney. However, recent evidence into the cellular characteristics of HEK293 cells has led to the suggestion that they may actually originate from a neuronal fetal kidney cell.

HEK293 cells are frequently utilized in research for several reasons. Firstly, they are very easy to grow and to maintain, with high reproducibility, which makes them preferable over other less-robust and slow-growing cell lines.

Furthermore, they are very efficient at protein production and accessible for transfection. Through the insertion of plasmid vectors, the cell’s synthetic protein machinery can be influenced to make the transfected protein, utilizing the inserted genetic information.

These cells have been widely used in research. For example, they have been used to analyze the effect of drugs on sodium channels, the interactions between different proteins and to produce proteins and drugs.

For example, this cell line was transfected with a recombinant activated protein C, which was then synthesized, isolated, and later tested for the treatment of sepsis. This example, therefore, demonstrates the effectiveness of this cell line in the expression of novel proteins. Furthermore, these cells can be used for adenoviral vector proliferation as they contain several adenoviral genes but lack the dangerous key viral genes (E1 and E2) making the produced vectors much safer.


The continuing development of HEK293 cells