COVID-19 testing has been a failure in the United States since the very onset of the outbreak. Sick patients have had to wait for hours in lines outside hospitals or overnight in their cars. Those who were able to get their noses swabbed are subjected to a second wait for the results to be returned. Simply put, there are not enough tests to go around. And the ones that do exist take time to perform and have been saddled with concerns regarding sensitivity (identifying people who have the disease) and specificity (identifying people who don’t have the disease).

At the time of the writing of this article, in mid-April, just under 400,000 SARS-CoV-2 tests had been completed in the United States. Just over 40 test kit manufacturers have had Emergency Use Authorization (EUA) requests approved by the U.S. Food and Drug Administration. Some of the manufacturers of the approved diagnostics include Atila BioSystems, DiaCarta, Becton, Dickinson & Company, Abbott Diagnostics Scarborough, Qiagen, BGI Genomics, PerkinElmer, Cepheid, Thermo Fisher Scientific, and Roche Molecular Systems.

“Our main need is diagnostics,” said Charles Chiu, MD, PhD, professor of laboratory medicine in the division of infectious diseases at the University of California, San Francisco, during a virtual town hall held by SynBioBeta—a synthetic biology network. Diagnostics drive both the development of vaccines and therapeutics, Chiu explained, and they also inform public health responses.

“It’s absolutely critical that we have very rapid diagnostics that can be moved from the clinical labs to point-of-care settings,” he said. One of the few tools we possess to stop the spread of the virus is self-quarantine, he noted. “Having the ability to test at home is going to be critical.”

The race for improved COVID-19 diagnostics beyond the currently available real-time RT-PCR test will hopefully yield tests that are faster, more accurate, and affordable. Better tests would help establish rapid testing options such as pop-up testing centers, which could be located almost anywhere, or off-the-shelf tests, which could be obtained from the nearest pharmacy at the first sign of a fever or cough.

While the COVID-19 pandemic is in full swing, hope to bridge the testing gap may be found in the CRISPR revolution—specifically, in CRISPR-based diagnostics. Over the past two years, CRISPR-based diagnostics development has been gaining momentum. With added impetus from the current pandemic, it may break through whatever barriers to commercialization remain. Two young companies—Cambridge-based Sherlock Biosciences and San Francisco-based Mammoth Biosciences—and a handful of associated academics are working to make CRISPR-based diagnostics a reality. (See “CRISPR Dx May Help Nix Disease,” GEN October 2019 Vol. 39 No. 10).

During a 2018 TED talk, Janice Chen, PhD, co-founder and CTO of Mammoth Biosciences, declared, “We are only at the beginning of the CRISPR diagnostics revolution.” She presented a vision of a future in which “a point-of-care CRISPR diagnostic can help us rapidly identify and control emerging outbreaks.” Little did she know that her vision would start to become reality just over one year later.

Cas9 is the cornerstone of CRISPR genome editing. The enzyme, often said to work like a pair of molecular scissors, can cut DNA at targeted locations. Mammoth’s technology, named DETECTR (DNA Endonuclease Targeted CRISPR Trans Reporter), relies on Cas9’s distant cousin Cas12. The Cas12 nuclease, according to Chen, acts like a molecular paper shredder. Because of this activity, CRISPR can be used to send a report of the presence of target DNA in real time. 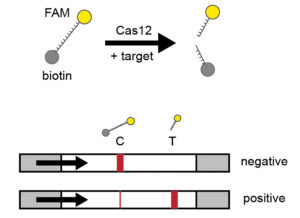 A guide RNA (gRNA) is designed that recognizes a specific DNA or RNA sequence—for example, one of the genes found in the SARS-CoV-2 coronavirus. Cas12 and the gRNA will search for the sequence match. If the RNA target is present in a sample, Cas12 will start cutting without stopping (like a paper shredder). DETECTR uses additional RNA reporter molecules tagged with a fluorescent dye (fluorescein amidite, FAM) that produces a color when cut. When this system is used, the presence of the target of interest is reported indirectly through cleavage of the reporter—which activates only after the target is recognized.

The sample is then added onto a flow detection system using a lateral flow strip. If SARS-CoV-2 is absent, the reporter remains intact and collects at the first detection line—the control capture line. If the sample is positive, the Cas-gRNA complex will cut the target and the reporter molecules. These cleaved fragments collect at a separate location—the target capture line. Gold nanoparticles bind to the FAM molecule on the reporter, thus generating a visual readout on the strip.

In 2018, Chen and her colleagues validated the DETECTR system by screening patient samples for human papillomavirus, demonstrating almost perfect accuracy. In addition, the process took less than an hour, start to finish, and cost pennies per reaction.

In April 2020, Mammoth researchers, in collaboration with Chiu and his UC San Francisco team, validated their method on COVID-19 patient samples. Presented in a Nature Biotechnology paper entitled, “CRISPR-Cas12-based detection of SARS-CoV-2,” the work reports the development of a rapid (~30 min), low-cost, and accurate assay for detection of SARS-CoV-2. The authors validated this method using samples from infected U.S. patients and asserted that it “provides a visual and faster alternative to the U.S. CDC SARS-CoV-2 real-time RT–PCR assay.”

The important thing about this work, said Trevor Martin, PhD, Mammoth’s co-founder and CEO, was “using the test on real samples.” There can be a huge difference, he explained, between doing things in the synthetic world and in the real world—adding that they want to get to that real-world point as quickly as possible when making diagnostics.

“What this COVID-19 pandemic has shown,” noted Martin, “is that there is a huge gap in what is possible in diagnostics today.” That gap is the ability to have really accurate and sensitive, specific diagnostics that would be available in a hospital setting, but in a decentralized manner. The data in the paper is one of the steps needed to move from the lab to a field setting, such as an airport or even the home.

Chiu added that democratizing these tests is important for several reasons. One is the ability to do serial testing, which could monitor patients on a regular basis. The development of rapid, low-cost tests that could be done multiple times a day or at least multiple times per patient, would be very helpful. Chiu also emphasized the importance of developing multiplex tests that could test for COVID-19 and other respiratory pathogens simultaneously instead of relying on separate tests for each virus.

Sherlock is sleuthing for the right partner

A March white paper published by Feng Zhang, PhD, and two former graduate students, Omar O. Abudayyeh, PhD, and Jonathan S. Gootenberg, PhD—all co-founders of Sherlock—outlines a protocol for how the group’s SHERLOCK technology can be used for COVID-19 detection. Using a system similar to that described for DETECTR, but relying on the Cas13 enzyme, the researchers were able to consistently detect COVID-19 target sequences in a range between 20 and 200 aM (10–100 copies/µL of input). The test can be carried out starting with RNA purified from patient samples, as is used for qRT-PCR assays, and read out using a dipstick in less than an hour without elaborate instrumentation. This academic assay, however, has not been validated using real patient samples and is not suitable for clinical use.

The protocols described in both Mammoth’s paper and the white paper describing SHERLOCK demonstrate capability and directionality, are being used to validate the technology, and can be used in a research context. But launching a product is a different story, Rahul K. Dhanda, the CEO of Sherlock, told GEN. And to launch a product, the work that needs to be done is far more rigorous and goes beyond publishing research protocols.

herlock started working on COVID-19 detection last January. “One of the really valuable things about CRISPR diagnostics is that it is rapidly developed and rapidly programmable,” noted Dhanda. As soon as Sherlock can gain knowledge of the sequences that it wants to detect, it can develop the test.

In the meantime, the team at Sherlock has been developing the pieces that are required to develop a product. This means establishing relationships with suppliers, manufacturers, and partners. What it takes to launch a product is scalability, noted Dhanda, and scalability requires a particular kind of infrastructure that small companies just don’t have. Moreover, he continued, building these relationships “takes more than just an agreement that they will work together.” There is technology transfer and other aspects that go along with it.

Mammoth is also actively speaking with partners to commercialize its test. Chen told GEN that some of the biggest potential barriers include “regulatory hurdles, manufacturing at scale, and developing a product that ensures actionable results.”

It’s a very complicated moment because, explained Dhanda, “people need tests.” What we need is testing more than we need anyone’s particular test, he added.

Some academics have taken matters into their own hands, including Jennifer Doudna, PhD, the co-inventor of CRISPR gene editing technology, co-founder of Mammoth, and executive director of the Innovative Genomics Institute at UC Berkeley. In a matter of a few weeks, a team of volunteer scientists led by Doudna set up a COVID-19 diagnostic testing lab. It will analyze at least 1000 patient samples a day via the standard RT-PCR test, with a turnaround time of less than 24 hours.

After there is something established to address the public health need, Sherlock will, Dhanda noted, evaluate new technologies that can make a difference. “But evaluating a new product,” he continued “will be a challenge.” Once an adequate test is up and running, there may not be time to evaluate a new product because there will be tests to run by the thousands. Consequently, the bandwidth to evaluate a new product, he pointed out, may be hard to find.

“We’re all hoping for the best outcome for public health,” asserted Dhanda. He wants Sherlock’s technology to have a specific place in filling that need. But he added that the company has to be patient as to if and when that can happen. Both Mammoth’s and Sherlock’s tests will need to be tested and approved by the FDA, which takes time. Given the FDA guidance, it would be possible to have these tests ready in a matter of weeks “if we can all get our ducks in a row,” allowed Dhanda. He added, however, that “there are a lot of ducks.” That said, things are changing every day.

At this point, it’s hard to predict if Mammoth or Sherlock are going to become major players in testing patients with COVID-19. Regardless, the research being done today will surely pay off in the future. Although everyone wants to move as quickly as possible, not all partners have the same pace. Even the fastest contestants in this race started well behind the frontrunner—SARS-CoV-2.
Ubigene Biosciences is co-founded by biological academics and elites from China, the United States, and France. We are located in Guangzhou Science City, which serves as a global center for high technology and innovation. Ubigene Biosciences has 1000㎡ office areas and laboratories, involving genome editing, cell biology technology, and zebrafish research. We provide products and services for plasmids, viruses, cells, and zebrafish. We aim to provide customers with better gene-editing tools for cell or animal research.