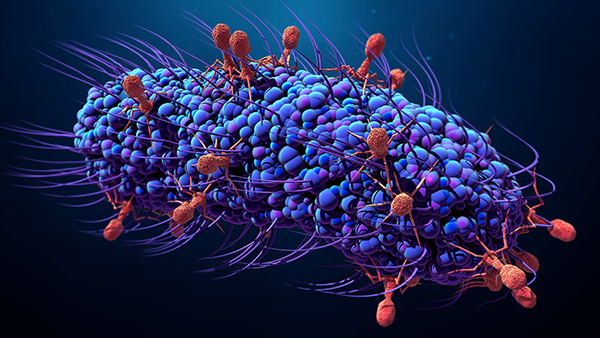 It helps to pack light, whether you’re a live virus or a gene editing vector. That’s why a travel-size version of a DNA-cutting enzyme that was found in a virus is of interest to genomic scientists. The enzyme, called CasΦ, is about half the size of Cas9, the most widely used CRISPR-Cas gene editing enzyme. What’s more, it now appears that CasΦ has virtues besides compactness. It is functional in vitro and in human and plant cells. And it offers expanded target recognition capabilities relative to other CRISPR-Cas proteins.


The new findings about CasΦ appeared July 16 in Science, in an article titled, “CRISPR-CasΦ from huge phages is a hypercompact genome editor.” The “huge phages,” or megaphages, use CasΦ to trick bacteria into fighting off rival viruses. In doing so, the megaphages show rare cunning against other phages. But perhaps what’s even more cunning is that the megaphages appear to have their own version of a virus-fighting trick that is widely used by bacteria. 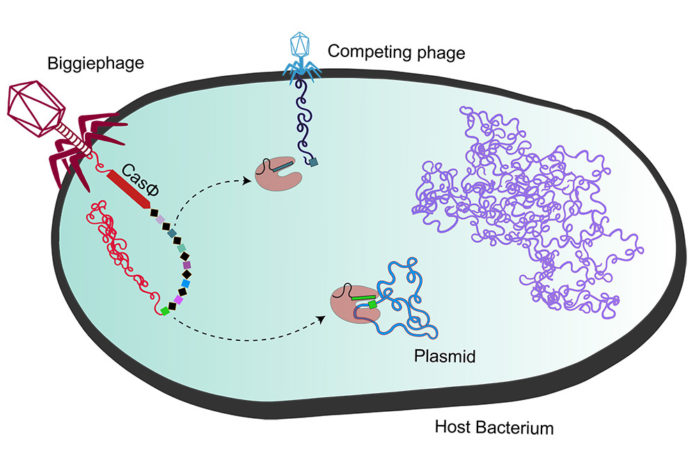 The article’s authors, scientists based at the University of California (UC), Berkeley, noted that CasΦ should be useful for both genome editing and DNA detection. Also, they emphasized that the hypercompact CasΦ offers advantages for cellular delivery that expand the genome editing toolbox.

Smaller and more compact Cas proteins are easier to ferry into cells to do genome editing, since they can be packed into small delivery vehicles, including one of the most popular: a deactivated virus called adeno-associated virus (AAV). Hypercompact Cas proteins also leave space inside AAV for additional cargo.

“Adenoviruses are the perfect Trojan horse for delivering gene editors,” said Patrick Pausch, PhD, one of the article’s lead authors and a postdoctoral fellow at the University of California, Berkeley, and in UC Berkeley’s Innovative Genomics Institute (IGI). “You can easily program the viruses to reach almost any part of the body.

“But you can only pack a really small Cas9 into such a virus to deliver it. If you would have other CRISPR-Cas systems that are really compact, compared to Cas9, that gives you enough space for additional elements: different proteins fused to the Cas protein, DNA repair templates, or other factors that regulate the Cas protein and control the gene editing outcome.”

The CasΦ protein—which has the Greek letter Φ, or phi, in its name because Φ is used as shorthand for bacteriophages—was first discovered last year by Basem Al-Shayeb, PhD, the Science article’s other lead author and a doctoral student in the IGI. At the time, Al-Shayeb was working in the laboratory of Jillian F. Banfield, a UC Berkeley professor of earth and planetary science and environment science, policy, and management. In the Banfield laboratory, the CasΦ-containing megaphages were recognized as members of a group dubbed Biggiephage. They were found in a variety of environments, from vernal pools and water-saturated forest floors to cow manure lagoons.

“The thing that actually made me interested in studying this protein specifically is that all the known CRISPR-Cas systems were originally discovered in bacteria and Archaea to fend off viruses, but this was the only time where a completely new type of CRISPR-Cas system was first found—and so far only found—in viral genomes,” said Al-Shayeb. “That made us think about what could be different about this protein, and with that came a lot of interesting properties that we then found in the lab.”

Among these properties: CasΦ evolved to be streamlined, combining several functions in one protein, so that it can dispense with half the protein segments of Cas9. It is as selective in targeting specific regions of DNA as the original Cas9 enzyme from bacteria, and just as efficient, and it works in bacteria, animal, and plant cells, making it a promising, broadly applicable gene editor.

“This study shows that this virus-encoded CRISPR-Cas protein is actually very good at what it does, but it is a lot smaller, about half the size of Cas9,” said Jennifer A. Doudna, PhD, the study’s senior author, IGI executive director, a UC Berkeley professor of molecular and cell biology and of chemistry, and a Howard Hughes Medical Institute investigator. “That matters, because it might make it a lot easier to deliver it into cells than what we are finding with Cas9.

“When we think about how CRISPR will be applied in the future, that is really one of the most important bottlenecks to the field right now: delivery. We think this very tiny virus-encoded CRISPR-Cas system may be one way to break through that barrier.”

To isolate the gene coding for CasΦ, the investigators used metagenomic sequencing. Actually, the investigators started by combing through the gene inventories of microbes. Performing this work positioned the investigators to “understand how the organisms function independently and in combination within their communities,” Banfield said. “CRISPR-Cas systems on phage are a particularly interesting aspect of the interplay between viruses and their hosts.”

While metagenomics allowed the researchers to isolate the gene coding for CasΦ, its sequence told them only that it was a Cas protein in the Type V family, though evolutionarily distant from other Type V Cas proteins, such as Cas12a, CasX (Cas12e), and Cas14. They had no idea whether it was functional as an immune system against foreign DNA.

The current study showed that, similar to Cas9, CasΦ targets and cleaves foreign genomes in bacterial cells, as well as double-stranded DNA in human embryonic kidney cells and cells of the plant Arabidopsis thaliana. It also can target a broader range of DNA sequences than can Cas9.

The ability of CasΦ to cut double-stranded DNA is a big plus. All other compact Cas proteins preferentially cut single-stranded DNA. So, while they may fit neatly into compact delivery systems like AAV, they are much less useful when editing DNA, which is double-stranded, inside cells.

As was the case after Cas9’s gene-editing prowess was first recognized in 2012, there is a lot of room for optimizing CasΦ for gene editing and discovering the best rules for designing guide RNAs to target specific genes, Pausch said.

“[Our findings] suggests that size limitations of phage genomes, possibly in combination with large population sizes and higher mutation rates in phages than in prokaryotes, led to a consolidation of chemistries within one catalytic center,” the authors of the Science article speculated. “Such compact proteins may be particularly amenable to engineering and laboratory evolution to create new functionalities for genome manipulation, and they highlight huge phages as an exciting forefront for discovery and biotechnological applications for human health.”