Diabetic retinopathy (DR) is a microvascular complication of diabetes, threatening the vision of working-age and aged population worldwide, which is preventable [1]. Though various studies have been reported in exploring the mechanism and treatments of DR, there are still many unknowns surrounding the disease which calls for further investigation. DR is a neurovascular disease which damages both the retinal vessels and neural cells [2]. As the primary neuroglia crossing from the outer to the inner layer of neuroretina, müller glia provides nutrition and structural stability, which is vital for the homeostasis of retina [3]. Impairment of müller cell under hyperglycemic condition can certainly induce injury to the neuroretina. Therefore, researches in the relationship between müller glia cell and DR are recommended. 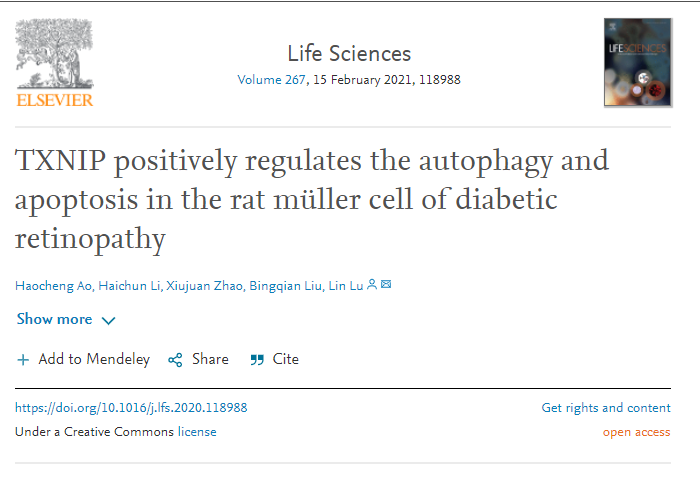 
Reverse transcription-quantitative polymerase chain reaction (RT-qPCR) and western blotting were used to measure the expression level of the targets. Clustered regularly interspaced short palindromic repeats/CRISPR-associated 9 (CRISPR/cas9) method was applied for knockout of TXNIP. TdT-mediated dUTP Nick-End Labeling (TUNEL) assay and flow cytometry were utilized to detect the apoptosis. Cell Counting Kit-8 (CCK-8) assay was used to evaluate the cell viability. EdU assay was carried out to measure the cell proliferation ability. Retinal immunohistochemistry, retinal frozen section immunofluorescence as well as the electroretinogram (ERG) recording were implemented to detect the function of the retina. 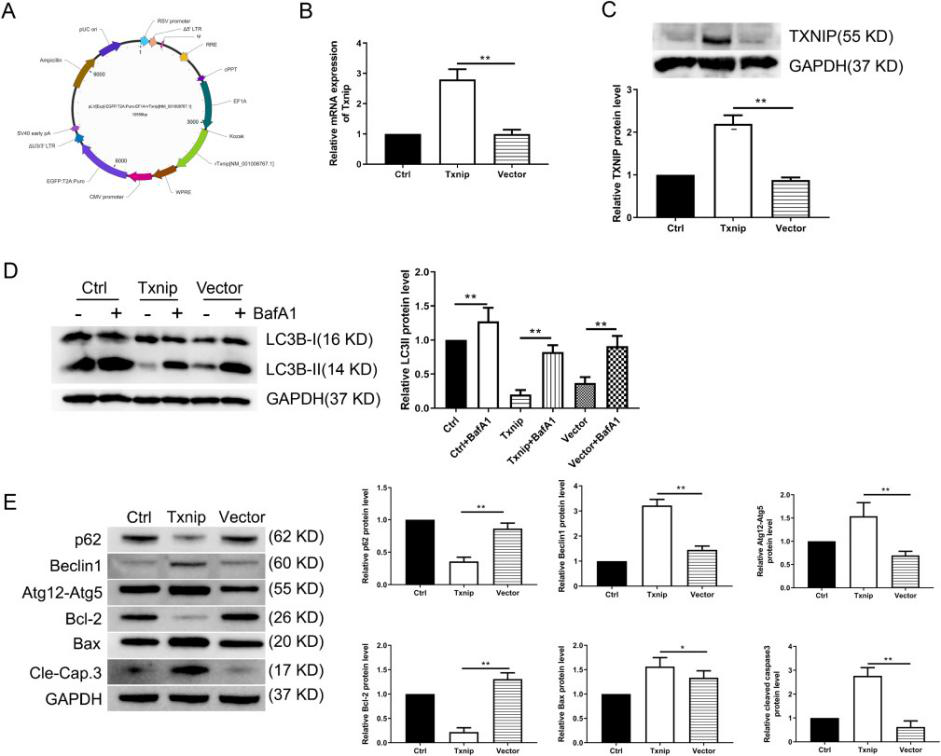 
In conclusion, based on the findings of our study, researchers validated the overexpression of TXNIP in vivo and in vitro under hyperglycemic condition, which may serve as a potential biomarker in assessing the severity of diabetic retinopathy. Our study unraveled for the first time that TXNIP positively regulates the autophagy in rat müller cell under high glucose condition by inhibiting the PI3K/AKT/mTOR signaling pathway. Downregulation of TXNIP leads to the reduction of autophagy as well as apoptosis, restoring the cell proliferation and cell viability under high glucose condition, and improves the visual function of diabetic rats. This study sheds light on a potential novel therapeutic approach for DR.


Ubigene provides various types of gene-editing vectors for different species and different virus packaging services, which will easily achieve microbial gene knockout, point mutation and knockin. Vectors and virus offered by Ubigene has been successfully applied in the gene knockout and overexpression on more than 100 cell lines.