HCT 116 was isolated from a 48 year old male patient with colorectal cancer in 1979 by M. brattain et al. The cells can form clones in semisolid agarose medium and are tumorigenic in athymic nude mice, forming epithelial-like tumors. So HCT 116 cell line is one of epithelial-like adherent tumor cell lines.


(1) To explore the mechanisms by which drugs affect colorectal cancer cell proliferation, migration and invasion. For example: PPARα plays an important role in the migratory activity and the expression of cyp2s1 and CYP1B1 of leukocyte treated HCT116 cells [2];

(2) To explore mechanisms of action in vitro by which drugs affect colorectal cancer cell growth, such as apoptosis and cell cycle alterations. For example: Raddeanin A regulates apoptosis and cycle arrest in human HCT116 cells through the PI3K/Akt pathway [3];

(3)To explore the sensitivity and resistance of drugs to colorectal cancer treatment. For example: Doxorubicin upregulates PD-L1 by inhibiting mir-140 expression in HCT116 cells, thereby rendering tumor cells being resistant to the drug [4];

The application of CRISPR/Cas9 technology in HCT116

As mentioned above, HCT116 cells have been of great research value in the studies on various mechanisms of colon cancer, and the most basic research ideas generally start at the molecular level, that is, gene or protein. Thus, CRISPR/Cas9 technology has emerged in many research topics, and it is nonetheless an irreplaceable advantage in studying the functions of single carcinogenesis gene.


Some researches found that Trpm4 is highly expressed in human colorectal cancer and it seems to be associated with colorectal cancer cell proliferation, cell cycle and invasion. It was found that both tumor cell migration and invasion were indeed reduced by knocking out Trpm4 using CRISPR/Cas9 technology in HCT116 cells, also accompanied by cell cycle alterations [7];


Researchers also found that the CTC1L1142H mutation resulted in impaired telomerase maintenance, by using CRISPR/Cas9 technology to mutate CTC1 in HCT116 cells. It confirmed that the CTC1:STN1 interaction was required for the inhibition of telomerase activity [10].


Hiroyuki Kato et al. using CRISPR/Cas9 technology introduced the mutations on UTX gene in HCT16 cells, which is G137V and G137VΔ138. They found that the wild-type UTX, which was originally expressed in the nucleus, greatly decreased in the nucleus, whereas increased in the cytoplasm in both mutant cells. As shown in Figure A to C: A, B were the immunofluorescence figures, C was the Western blot results. The results of co-immunoprecipitation are shown in fig.d, it is a novel regulatory mechanism of UTX. Also, the article also further revealed the importance of UTX interaction with MLL3/4 complex in cancer formation (ASH2L, PTIP and PA1 are components of MLL3/4 complex) . 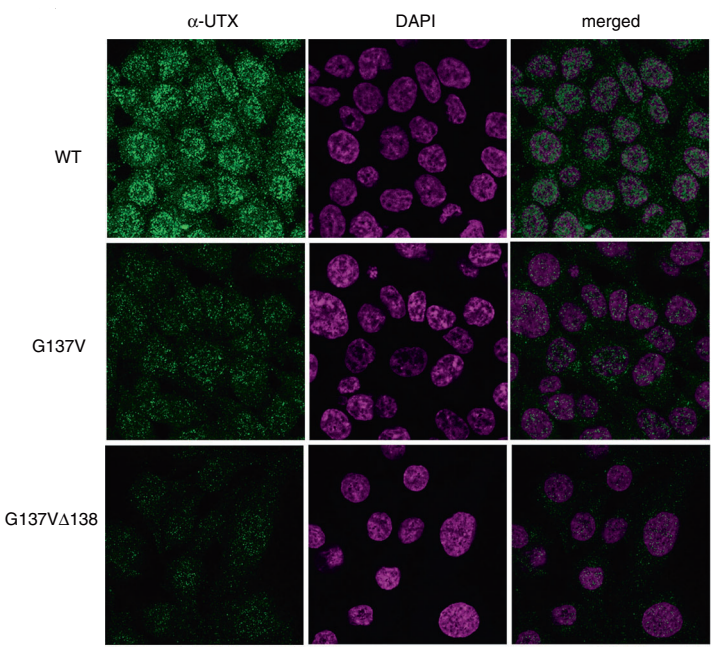 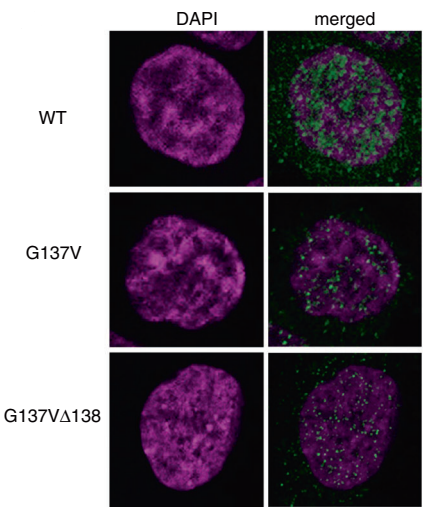 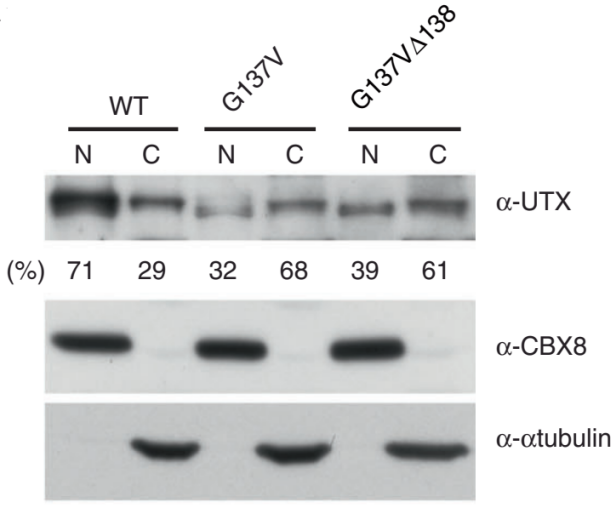 
CRISPR/Cas9 gene-editing technology is used to obtain HCT116 cell line with DAPK1 deletion by Sara Steinmann et al, and finally revealed the effect of DAPK1 on the invasion of colorectal cancer.


Because the chorionic allantoic membrane model (CAM) experiment is a classic in vivo model of angiogenesis, the researchers transplanted DAPK1 knockout clone and wild- type HCT116 cells to chicken CAM, and cultured in eggs for 5 days. It was found that the absence of DAPK1 led to the change of growth pattern and enhancement of tumor bud in CAM ( Fig. C)


In addition, the team used a rat brain 3D model in vitro to find that tumor cells had more proliferation in chicken embryonic organs, and the invasion ability was also enhanced. DAPK deficient HCT116 cells showed more diffuse tumor cells and preferentially accumulated in the liver, heart, and brain of the chicken embryo (Fig. D). Finally, the researchers found that DAPK1-ERK1 signaling pathway is involved in the metastasis of CRC (Fig. E). 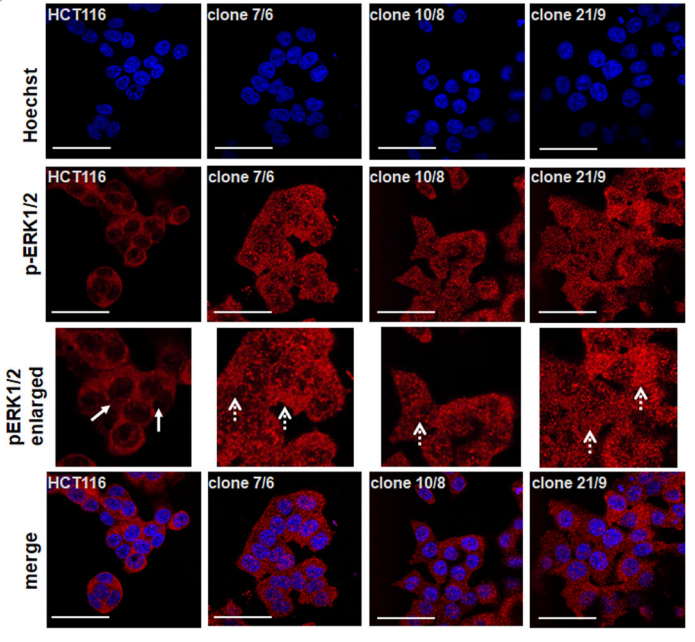 
BAX is one of the members of pro-apoptotic Bcl-2 gene family, which plays an important role in mitochondria dependent apoptosis initiation. R Peng et al have knocked in five mutation sites in BAX-KO HCT116 cells, which are located in the BAX gene and interact with other members of Bcl-2.


It has been reported that BAX-KO HCT116 cells do not undergo apoptosis by the stimulation of sulindac, a steroidal drug. R Peng et al found that knock in WT BAX in BAX-KO HCT116 cells can restore sulindac, and can restore HCT116 apoptosis caused by TRAIL. After knocking in the K21E and D33A mutations, BAX mediated apoptosis was completely restored; Knocking-in D68R and S184V mutations only partially recovered, while knocking in L70A / D71A mutation caused less apoptosis. 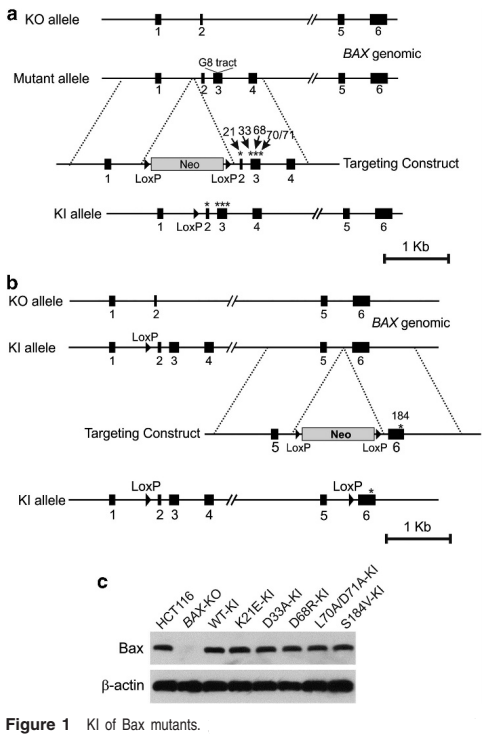 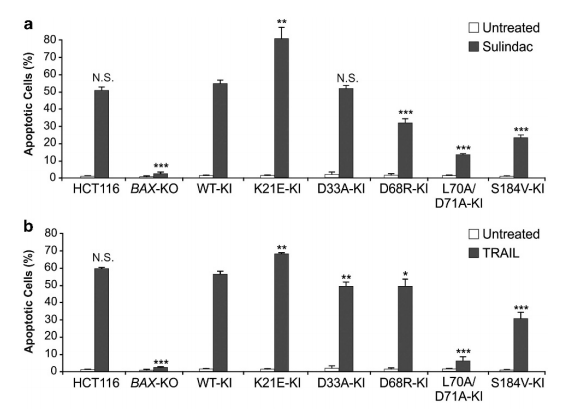 In this study, the target gene in the target cell is knocked out, and then knock in the target gene containing the mutation site and WT target gene (contrast), then we can clearly understand the specific site relationship between the protein expressed by the target gene and other proteins interacting with it, It is a good method to verify whether the predicted sites obtained by bioinformatics analysis really play a role in protein-protein interactionUbigene also provides the corresponding service convenience for scientific researchers. While enjoying the gene KI cell line service, free knockout cells can be obtained which meets the various research needs.