Protein therapy produced by mammalian cell lines changes the pattern of human medical levels. Mammalian cell-based biological processes have been used to manufacture viral vaccines, diagnose and treat proteins. In the production of protein agents, cell lines are the main host of protein production. The most widely used host mammalian cell lines are the Chinese hamster ovary (CHO) cell line and mouse myeloma cell line. After long-term domestication and transformation, the CHO cell line has now developed several CHO cell lines, common with CHO-K1, CHO-S, CHO-DXB11, CHO-DG44, etc. CHO-S cell line is also a wild-type cell strain, both with CHO-K1 from the original e CHO cell line. CHO cell line is the preferred manufacturing host cell line for more than 70% of protein drugs in the market because the CHO cell line is able to grow at high density in serum-free suspension culture and can maintain high levels of protein expression during a prolonged fermentation cycle. In addition, the CHO cell line can be mixed with complex glycans in externally expressed proteins, typical glycoproteins containing only a few N-linked oligoglycans, aiding in protein folding and intracellular transport. When these glycans terminate in sialic acid residues, they increase resistance to proteolhydrolysis and prolong serum half-life in the body. Due to these physical and pharmacokinetics advantages, recombinant glycoprotein expression focuses on maximizing the number of complex glycans containing sialic acid in each molecule. Thus, the CHO cell line also becomes a host cell line widely used for recombinant protein expression[2].

CHO cell line, as mammalian cell line, is closer to human cell protein compared to post-translational modification of yeast cell line and Drosophila cell line S9 in the eukaryotic expression system. CHO cell line not only has the characteristics of adherent growth but also can conduct high-density suspension culture in serum-protein-free medium, suitable for large-scale industrial production. CHO cell line is subordinate to fibroblasts, with less endogenous protein secretion, and can efficiently isolate and purify recombinant proteins. In addition, the CHO cell line has high expression and amplification of recombinant proteins. At the same time, the CHO cell line also has its own inevitable genetic defects, its intracellular non-free proline synthesis gene, resulting in the inability to convert glutamate into glutamate-γ-semilaldehyde, and the addition of assisted-growing L-proline to the corresponding medium [2].

The Application of CRISPR/Cas9 Technology in CHO Cell Line 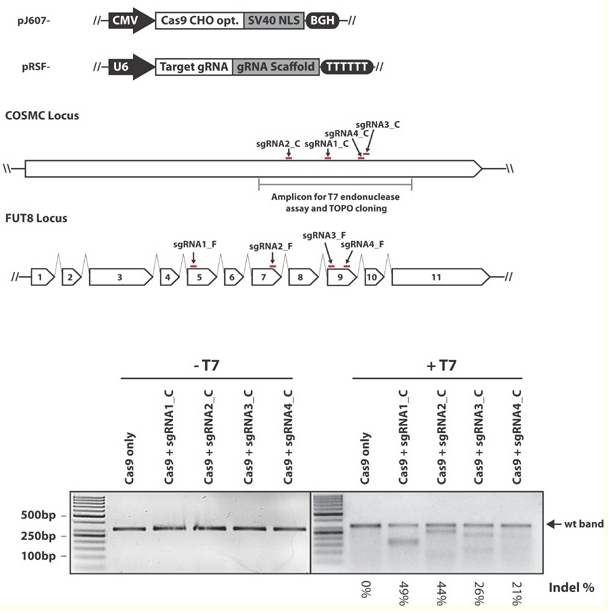 CHO cell line is the preferred host for the biological pharmaceutical industry to produce complex pharmaceutical proteins, and the genomic engineering of the CHO cell line will benefit product production and stability. To verify the effects of Dnamt3a KO on the stability of transgene expression, Long et al. tested the knockout efficiency of Dnmt3a, encoding a protein involving DNA methyltransferase, polycolonies of the 3a-30 and control CHO-K1 cells stably transfected with CMV or EF1α were passaged under selection pressure in the presence (G418+) or absence (G418−) of G418 for 60 passages. The MFIs were detected to evaluate the intensity values of the expressed eGFP at 10, 20, 30, 40, 50, and 60 passages. The Dnmt3a-deficient 3a-30 cell line transfected with CMV exhibited the most stable and the highest expression levels regardless of the presence or absence of G418 (Fig.1). The transgene expression levels in the 3a-30 and normal CHO cells stably transfected with EF1α exhibited a loss of productivity during long-term culture. The results indicated that the Dnmt3a KO in the CHO cell line can enhance the long-term stability of recombinant protein expression by using CMV for at least 50 passages (Fig.1 B)[4].

To estimate the capacity and efficiency of gene knock-in at the HPRT1 locus in CHO-K1 cell line, Sakuma et al. first performed whole plasmid integration using the TALEN-mediated PITCh system, which was previously proven to work well in human cell lines. DsRed and PuroR gene cassettes, driven by elongation factor 1α (EF-1α) and Simian virus 40(SV40) promoters, respectively, were independently placed in the donor plasmid, to easily screen the donor-incorporated cell lines (Fig. 4a). However, these gene cassettes can work even if the plasmid is integrated into the genome via random integration. Subsequently, a modified TALEN target sequence, enabling MMEJ-mediated PITCh, was added to the donor plasmid. The modified TALEN site contains a different spacer sequence from the original target site on the genome, as shown in Figure 4b. After the occurrence of DSBs at each target site. Ideally, 9-bp microhomologies can be utilized for MMEJ-mediated integration (Fig. 4b) [5]. 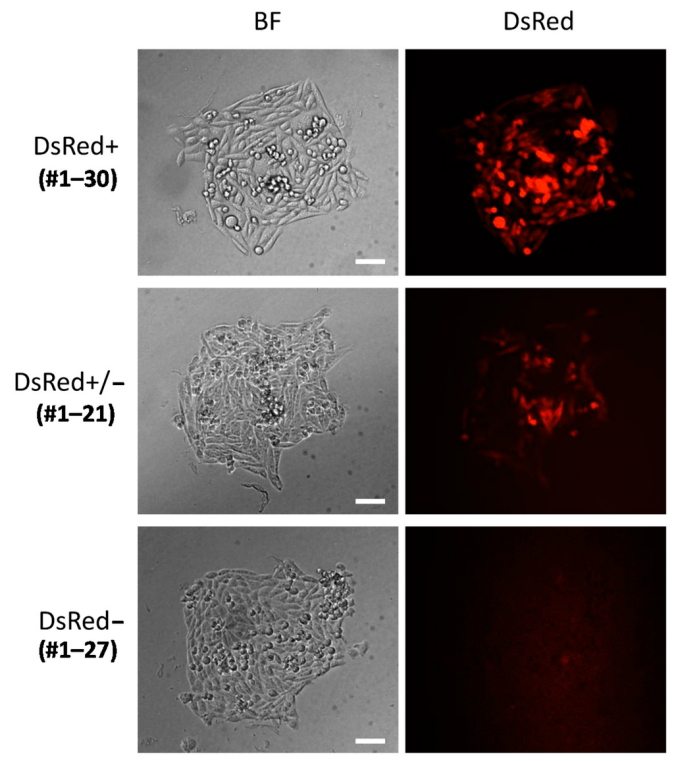 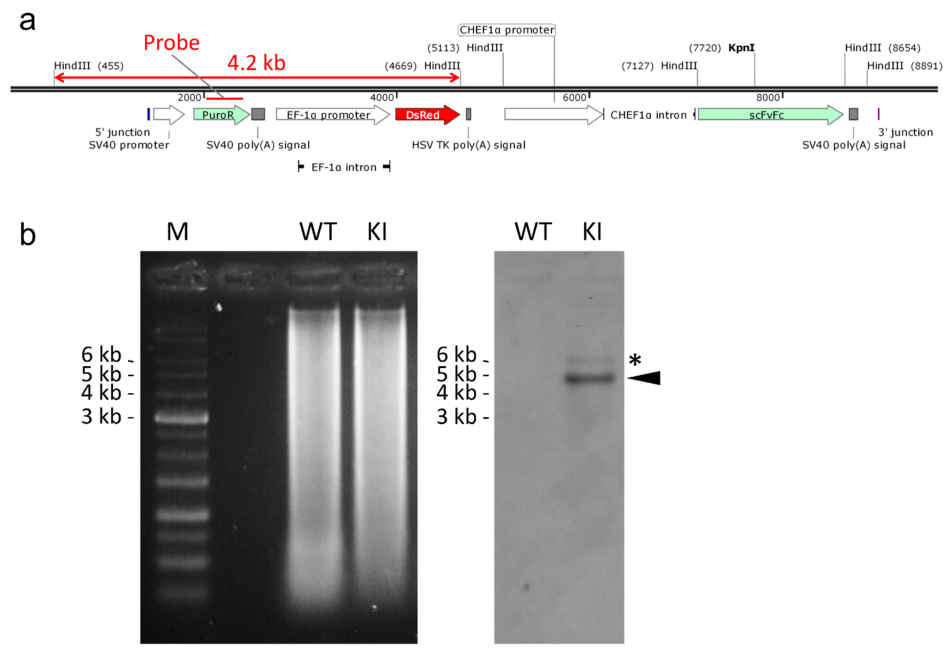 
3.Case of overexpression of Human-source protein in CHO cell line

Mutations in the hGHR gene are the main cause of Laron syndrome in order to construct genes hGHR associated with stably expressing congenital GH insensitive syndrome as well as CHO cell line of mutants (hGHR-E42K, hGHR-H56R). Lihua et al. used PUC-hGHR plasmid, fixed mutations obtaining two mutants (hGHR-E42K, hGHR-H56R), restricted enzyme cutting cloned the target gene to the eukaryotic carrier pcDNA3.1/ (zeo +), the recombinant cell lines were then transfected to CHO cell line with Lipofectamine2000, stable cell groups expressing hGHR and mutants through Zeocin resistance screening, and the hGHR, STAT5-P expression levels were confirmed with RT-qPCR and Western Blot. The results showed that sequencing verified the successful introduction of E42K and H56R missense mutations in hGHR and cloned to eukaryotic expression carriers, successfully detected mRNA and proteins of hGHR and mutants in CHO cell line after transfection and a lower phosphorylated STAT5 protein expression in the mutant cell line (hGHR-E42K, hGHR-H56R) than in wild cell strains. Therefore, at phosphorylation STAT5 levels after GHR mutations, it was found that both phosphorylation STAT5α, STAT5βprotein expression was significantly lower than wild-type GHR, explained the intrinsic mechanism of growth retardation in patients with GHR mutations [6]. 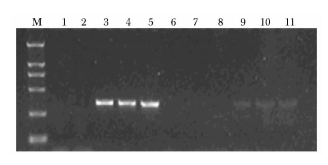