In 1986, Sen and Baltimore first identified a new transcription factor--NF-κB, which binds to immunoglobulin enhancers in activated B cells. Since then, NF-κB's research has been deepened and proved that it has an impact on tumor cell inflammation, proliferation, survival, apoptosis, angiogenesis, epithelial-mesenchymal transformation, metastasis, stem cell, metabolism and therapeutic drug resistance (Fig. 1). Virus infection, necrotic cell products, DNA damage, oxidative stress and pro-inflammatory cytokines can quickly induce NF-κB. It is worth noting that NF-κB has constitutive activity in malignant tumor cells and tumor microenvironment, and is rarely activated due to the changes of its related genes. Therefore, NF-κB has become a great potential for tumor therapy. Let's discuss further about NF-κB and its progress in tumor treatment. 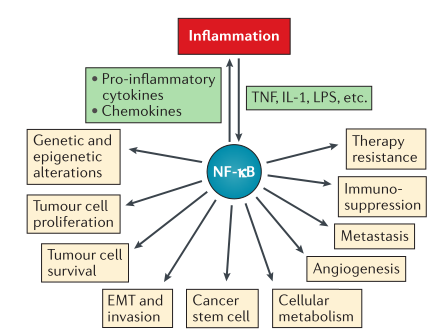 Fig. 1 Roles of NF-κB in tumor

NF-κB is an important family of transcription factors (Rel proteins) with structural similarities. This family is composed of NF-κB1 (p50), NF-κB2 (p52), RelA (p65), RelB and c-Rel (Fig. 2). In lung cancer, NF-κB members have different roles, for example, NF-κB1 (P105) is associated with longer survival, and the high expression of p52 related genes is associated with poor prognosis.

NF-κB proteins exist in cytoplasm as inactive complexes bound with κB family inhibitor (IκB). And the activation of NF-κB mainly occurs through typical (also known as classical) and atypical (also known as alternative) signaling pathways (Fig. 3). Typical pathways include proinflammatory cytokines, PAMPs and DAMPs, which bind to ligands (such as lipopolysaccharide and bacterial DNA), and antigen receptors through specific receptors and adapter molecules, such as TNF receptor (TNFR), IL1R receptor and toll-like receptor, and then phosphorylated IκB kinase β (IKKβ) to activate the pathway quickly and transiently. Subsequently, phosphorylated IKKβ forming complex IκB with heterodimer P50/p65, recruiting proteasome to degrade IκB, resulting in the release of effector P50/RelA and the translocation of P50/RelA to κB binding site in the nucleus to achieve its transcriptional activity (Fig. 3). In contrast, the activation of the atypical pathway, which depends on de novo synthesis of NF-κB inducing kinase, is much slower. It is activated by a small number of cytokines in the TNF family, resulting in the formation of p52/RelB heterodimer (Fig. 3).

NF-κB inducing kinase (NIK) plays a key role in cell signal transduction and regulation. NIK activation leads to IkB kinase α (IKKα) activation, and mediates the phosphorylation of P100. Phosphorylated P100 mediates ubiquitination, and finally its degradation is promoted by proteasome to produce p52. Then, p52 translocates into nucleus according to homodimer or heterodimer, where the complex acts as a transcription factor. 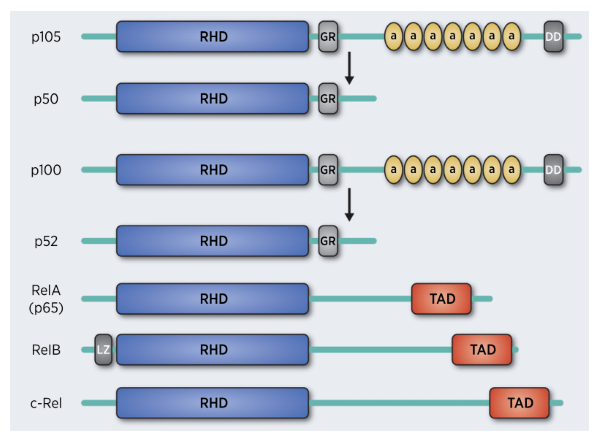 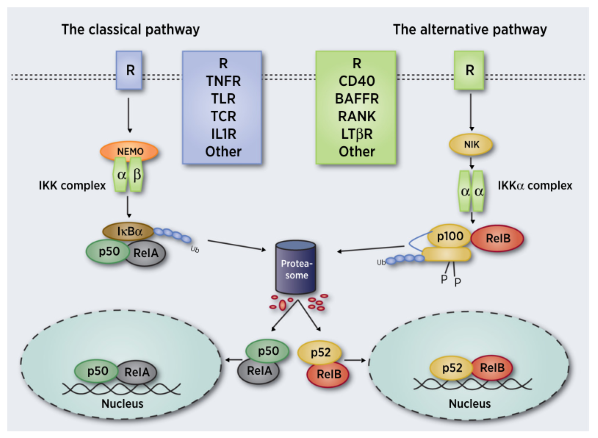 1.Identify the role of TRAF3 in RNA and DNA pathways by KO cell line

2.Demonstrate the switch like response of feedback interaction between IRF3, NF-κB and STAT pathway to poly (I: C) by KO cell lines

Maciej et al also used the knockout cell lines of MEFs (RelA–/–, Stat1–/–) and PMEFs (Tlr3–/–), and proved that the feedback interaction between IRF3, NF-κB and STAT pathways resulted in a switch-like response to the viral analog poly(I: C), rather than a pulse like response to bacterial LPS. Poly(I: C) activates IRF3 and NF-κB, which is a necessary condition for inducing IFNβ expression. The autocrine factor IFNβ initiates JAK/STAT mediated positive feedback stabilization of nuclear IRF3 and NF-κB in first responder cells. In contrast, paracrine IFNβ up-regulates the positive feedback components RIG-I, PKR and OAS1A through JAK/STAT mediated positive feedback pathway, which makes the second reactive cells sensitive. Among these sensitive cells, the "survival or death" determination period after poly(I: C) exposure is short - they quickly produce antiviral response and lead to apoptosis. In the process of cell population limiting pathogen transmission, the interrelated positive feedback and feedforward signals are the key to coordinate the determination of cell destiny.

3.Using KO hESCs to study the regulatory mechanism of RelA on human vascular disease and aging

Blood vessels transport nutrients and oxygen to the whole body through blood. The disorder of blood vessels will damage the function of vascular cells, resulting in serious cardiovascular diseases such as myocardial infarction, atherosclerosis and stroke. The activation of constitutive NF-κB in vascular cells can lead to chronic vascular inflammation, resulting in a variety of cardiovascular diseases. In order to solve the regulatory mechanism of NF-κB on human vascular cells and guide the treatment of cardiovascular diseases, the research team of the national geriatric disease clinical research center of Xuanwu Hospital of Capital Medical University used CRISPR/Cas9 mediated gene-editing technology to obtain human embryonic stem cells (hESCs) knockout of RelA and IκBα and differentiate them into various types of vascular cells. The results of multidimensional phenotypic evaluation and transcriptome analysis showed that the lack of RelA affected vascular cells by regulating inflammation, survival, angiogenesis, cell differentiation and cell-specific manner of extracellular matrix tissue under basic conditions, and RelA could protect vascular cells against apoptosis and regulate the response of vascular inflammation to tumor necrosis factor α (TNFα) stimulation. Finally, the gene expression pattern in IκBα knockout vascular cells was further evaluated, which proved that the role of IκBα was largely independent of RelA signaling pathway.

All in all, NF-κB/RelA has a protective effect in regulating human vascular homeostasis. At present, in the process of vascular inflammation, inhibiting NF-κB has provided a promising target for the treatment of various cardiovascular diseases. And various inhibitors targeting NF-κB pathway have been developed to expand the choice of clinical application. In view of the cell type specificity of NF-κB regulation, it is proved that high targeted therapy by inhibiting NF-κB activity is important in the treatment of vascular inflammatory diseases. At the same time, the establishment of human vascular transcriptome is of great significance for the discovery of new therapeutic targets.