Guideline of reporter cell line. How to pick a reporter? KI or overexpression? All in Ubigene

Guideline of reporter cell line. How to pick a reporter?

KI or overexpression? All in Ubigene

Reporter gene refers to genes encoding proteins that are easy to be detected (such as luminescence, dyeing, antibiotic resistance, etc.), and the phenotypes generated by these genes do not exist in the original receptor cells, tissues, organs, or individuals. Common reporter genes include fluorescent protein (EGFP, mCherry, etc.), luciferase (Fluc, Rluc, etc.) β-Galactosidase gene (LacZ), etc.

LacZ can be dyed blue by X-gal, which is often used for gene expression research of whole embryos or tissue slices, but less used for cell experiments. Luciferase needs to add luciferin substrate to produce luminance, while fluorescent protein can spontaneously fluoresce under the irradiation of specific wavelengths of excitation light. These two kinds of reporter genes are commonly used in cell transfection experiments, gene expression detection, promoter/enhancer research, in vivo imaging, protein localization, cell tracing, etc. In this article, Ubigene introduces the common applications and selection strategies of these two kinds of reporter genes at the cell level, to provide some ideas for your research design.

To construct cell lines that can express luciferase or fluorescent protein, and transplant them into animals. And quantitative, qualitative and in vivo tracking can be carried out through molecular imaging technology or scintillation counters. Reporter cell line is commonly used in cancer and tumor cell transplantation study. Xiangming Zhai et al. [1] constructed a lentivirus vector PTYF-CMV-Luc-2A-RFP-PGK containing luciferase and fluorescent protein, and then infected the liver cancer cell line SMMC7721 after lentivirus packaging. They screened it with Puromycin, and obtained a stable cell line by the limited dilution method. Then, Luc-2A-RFP cells were injected into the liver tissue of nude mice to establish an animal model of in situ liver cancer. The distribution of liver cancer cells in living animal was successfully observed by the in vivo fluorescence imaging system, laying a foundation for the treatment of liver cancer (Figure 1, Figure 2). 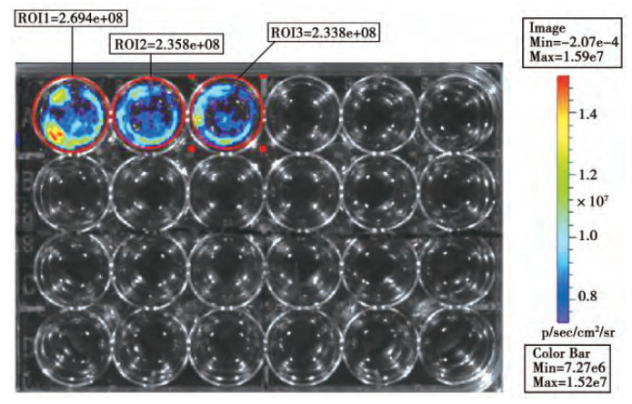 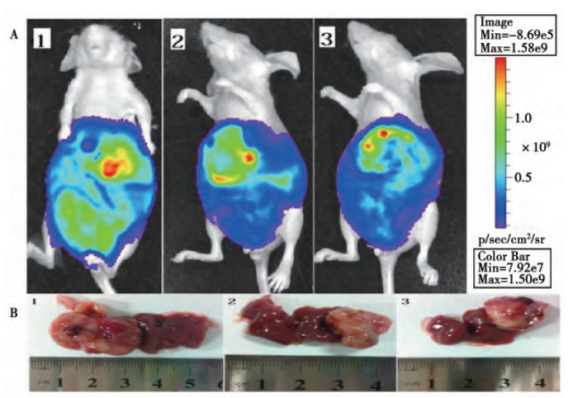 Ubigene provides over a hundred kinds of Luciferase and EGFP stable cell lines with expression data. Only $1590 for our custom stable cell line service, speed up your experiment process! More than 200 kinds of cell lines including THP-1/RAW264.7/Hep G2 and other challenging cell lines are available. Stable expression and high homogeneity. Contact us for more details of our service>>

2.Construct report cell lines for drug screening by CRISPR/Cas9 mediated in situ knockin of EGFP
APOBEC3B (A3B) is a DNA editing enzyme that induces genomic DNA mutations in multiple myeloma and various cancers. In order to facilitate the study of the function of A3B, Yamazaki et al. [3] knocked 3xFlag-IRES-EGFP into the 3 'end of A3B through CRISPR/Cas9 technology, and constructed three kinds of A3B reporter myeloma cell lines (U266, RPMI8226, AMO1). Through knockdown verification of shRNA lentivirus targeting A3B gene, it was found that when A3B mRNA was down-regulated, EGFP fluorescence intensity also decreased, which confirmed the feasibility of reporting cell model and could be used for subsequent anti-cancer drug testing (Figure 5). 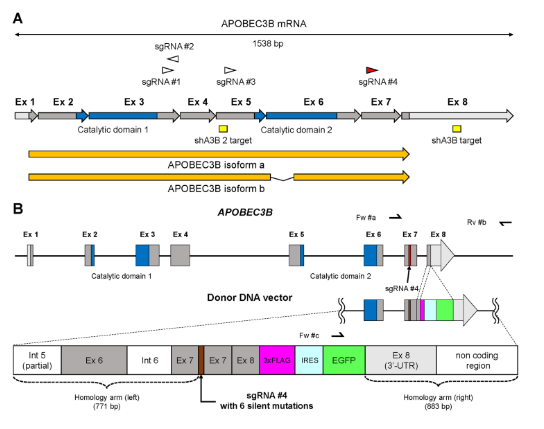 3.Detection of promoter expression activity with Luciferase or EGFP
Compared with traditional methods such as Western Blot and ELISA, reporter genes can monitor the expression level of target genes or promoter activity in vivo. Generally, the method of inserting fluorescent protein or luciferase after the promoter sequence is used for monitoring promoter activity. For example, Nina Solberg and Stefan Krauss [4] cloned the mTcf3 promoter fragment into the pGL3-basic report vector containing Fluc cDNA, and studied the activity of the mTcf3 promoter DNA fragment cloned in mouse embryonic-derived neural stem cells (NSCs) by comparing the activity of firefly luciferase with that of the Ranilla luciferase (reference). It was found that there were regulatory elements inhibiting promoter activity in the truncated fragment between 4.5 kb and 3.5 kb promoter fragments (Figure. 6). 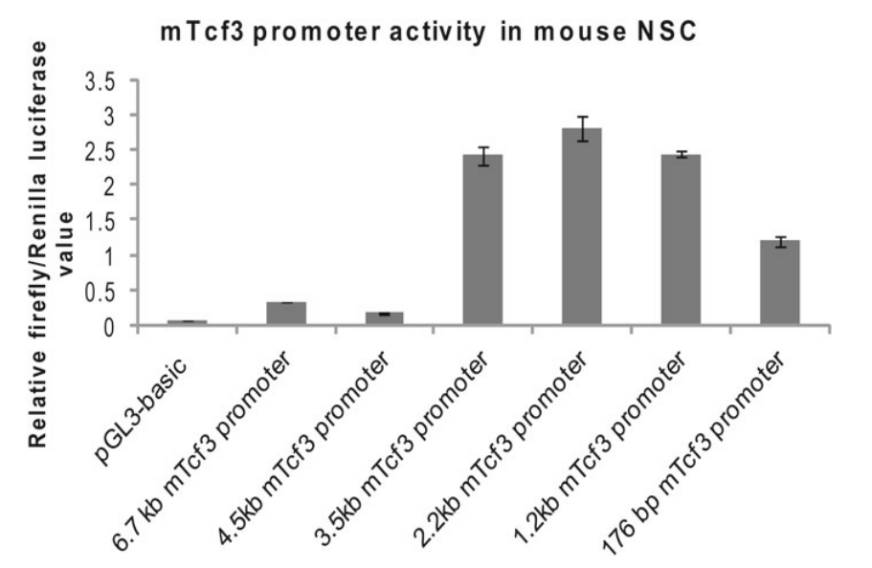 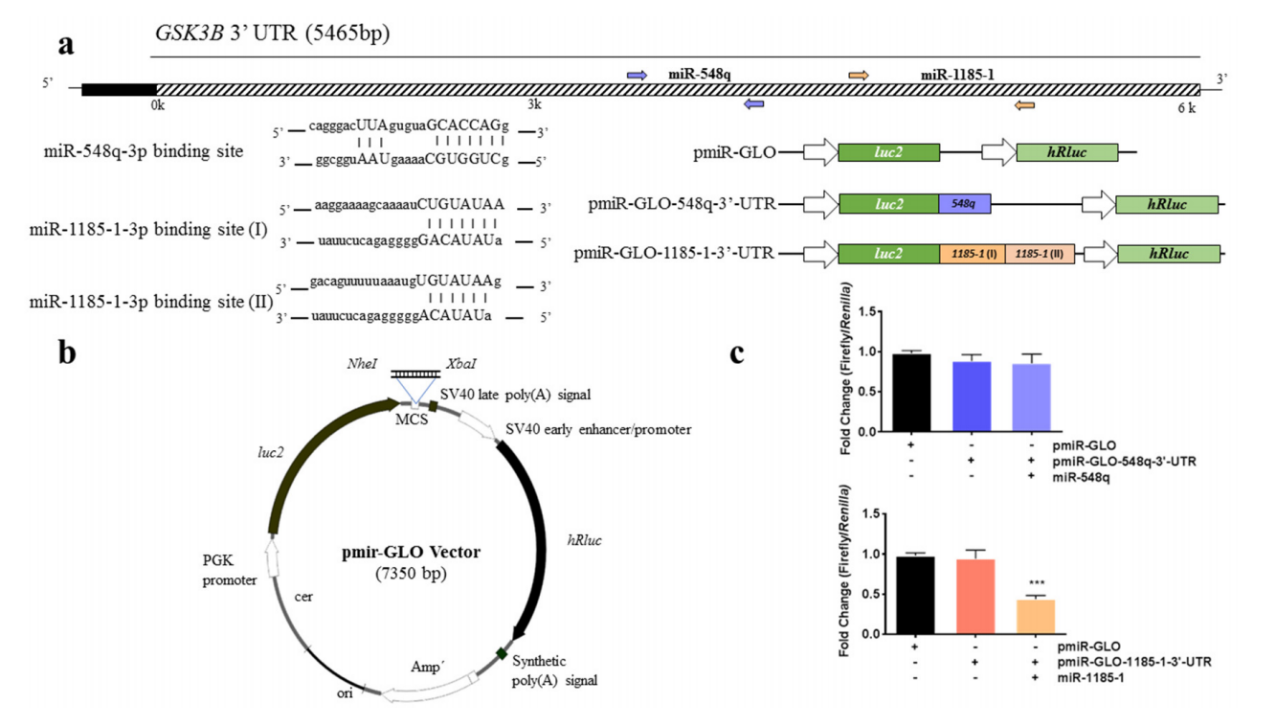 Figure 7. Binding analysis of GCK3B and miR-548q and miR-1185-1
In addition, reporter genes also have applications in protein interaction, RNA interference research, positive clone screening, etc. In the above cases, we found that the reporter cell line can be divided into two types from the expression genes, one is luciferase reporter gene, and the other is fluorescent protein reporter gene. There are also two construction methods of reporter cell lines, one is stable transfection, the other is in situ knockin (KI). What are the differences between these reporter genes and construction methods, and how to choose the right one for your research? We have sorted out the following key points for you:

Compared with fluorescent protein, luciferase has the advantages of high sensitivity, low background interference, high fluorescence intensity, strong penetrability, and easy quantification. It is more often used for promoter activity detection, miRNA function research, mouse tumor transplantation model construction, etc. The advantage of fluorescent protein is that it is convenient to observe without adding substrate, has low toxicity, multiple colors are available for selection, and the image is beautiful. It is suitable for polygene reporting systems, and is often used as a marker for stable cell lines, endogenous gene tracing markers, protein localization markers, and in vivo imaging. In general, both of these two kinds of reporter genes can be used in most cases. Many researchers also use the method of combining luciferase and fluorescent protein to co-express and construct the multi-functional report cell line. As for the construction method, in general, endogenous gene tracing and protein localization need to be constructed in situ by KI, while for other applications, stable overexpression can meet the experimental requirements.\