Gene mutation that cause autism can over stimulate brain cells!

Gene mutation that cause autism can over stimulate brain cells!

Autism Spectrum Disorder (ASD) is a group of complex neurodevelopmental disorders, including autism, Asperger's syndrome and generalized developmental disorder to be classified. It shows social interaction disorder, speech communication disorder, repetitive stereotypical behavior and other symptoms, which have a great impact on children's healthy development, the whole family. Therefore, it is meaningful to explore the pathogenesis of ASD to provide a theoretical ideas for effective prevention and early interference of ASD.

Synaptic dysfunction is considered to be the key physiological pathogenesis of ASD and other neurodevelopmental disorders. The genes related to it include the genes encoding neurojunction protein (NLGN) and neurexin (NRXN). Among them, R451C mutation in NLGN3 gene has been confirmed to cause mice social disorder, abnormal synaptic transmission and other features closely related to ASD. However, it has not been verified whether the mutation has the same effect in human neurons. 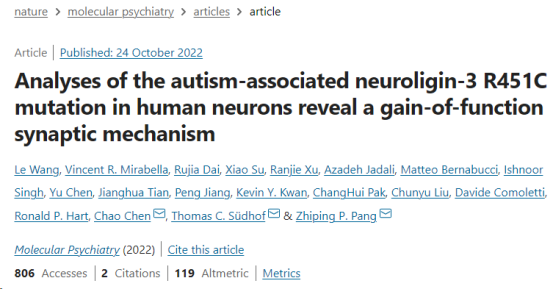 They used the differentiation potential of human embryonic stem cells to establish the NLGN3 R451C mutant neuron model through CRISPR/Cas9 gene editing technology. They found that after the NLGN3 R451C mutation was introduced, the level of NLGN3 protein in the cells decreased significantly, and the excitatory synaptic transmission increased. They also verified that the mutation was a key cell phenotype related to ASD, providing a theoretical basis for the development of ASD treatment strategies.

Co-cultured these two kinds of neurons , and analyzed their protein level and gene expression . It was found that, consistent with the results observed in the NLGN3 R541C mutation mouse model, knockin R451C mutation in human cells would lead to a significant decrease in the level of NLGN3 protein in the cells (Figure 1e). However, qPCR results showed that NLGN3 R451C knockin did not change the level of NLGN mRNA (Figure S2), indicating that NLGN3 R451C mutation caused the decrease of protein level by affecting the stability of NLGN3 protein. 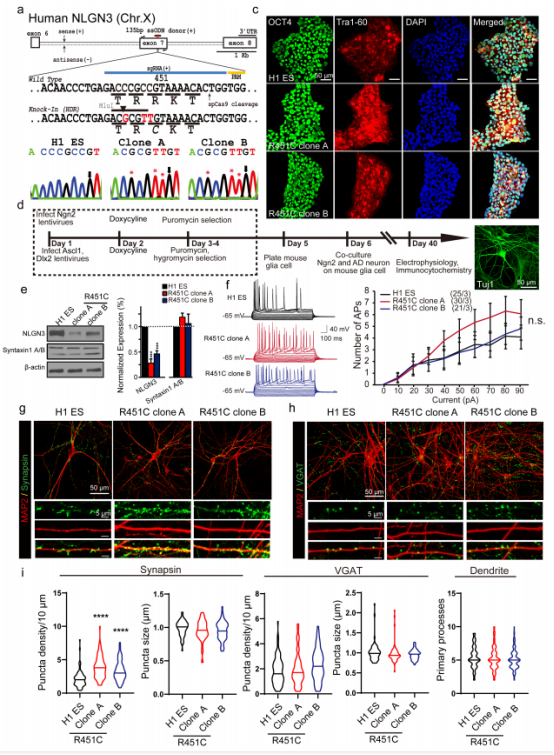 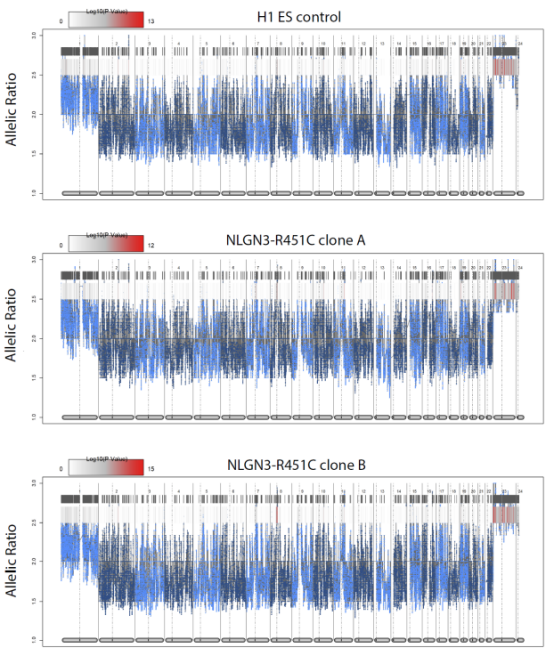 Subsequently, in order to study whether the neurons that affected by NLGN3 R451C mutation and the decreased level of intracellular NLGN3 protein have dysfunction, the researchers analyzed the mutant neurons and control neurons through whole cell patch clamp technology and morphology. They found that NLGN3 R451C mutant neurons had similar natural point response characteristics and action potentials in response to electrical stimulation as the control neurons (Figure 1f, Figure 2c-e), but only the number of excitatory synapses of the mutant increased (Figure 1g-i).

The spontaneous excitatory postsynaptic potentials (sEPSCs) and inhibitory postsynaptic currents of NLGN R451C mutant neurons and control neurons were recorded and analyzed. It was found that compared with the control neurons, the sEPSCs frequency of NLGN R451C mutant neurons increased significantly, but there was no significant difference in sIPSCs (Figure 2f-i). Similar results were observed in the experiment in which tetrodotoxin was added as the stimulus source, indicating that the NLGN3 R451C mutation in human neurons can enhance the intensity of excitatory synaptic transmission by increasing the number of excitatory synapses, thus breaking the balance of synaptic excitatory/inhibitory transmission, leading to the dysfunction of neurons. 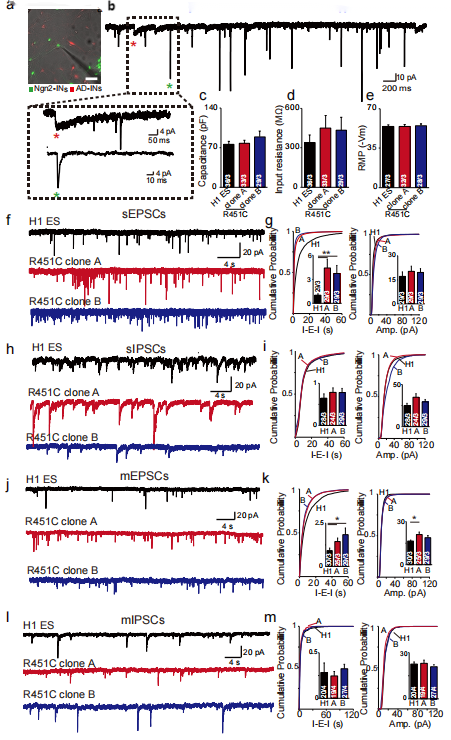 Based on the above results, the researchers speculate that the NLGN3 R451C may induce endoplasmic reticulum stress response by affecting the stability of NLGN3 protein, thus causing significant damage to neurons and leading to ASD. However, after verification, they ruled out this speculation and made other explorations on its specific mechanism.

Ubigene has successfully achieved gene editing in various stem cells, and has accumulated rich experience in stem cell culture and gene editing. We developed the refined stem cell culture medium to retain the stemness and good cell condition before and after transfection. The exclusive CRISPR-U™ system improves gene editing efficiency by 10X, and helps us to easily obtain high-quality gene editing homozygous iPSC and ESC clones! Gene knockout, knockin, and point mutation are all feasible! It is no longer difficult to construct neural cell and myocardial cell models!Get a quote>>

It is found that the transplanted neurons have been successfully integrated into the neural network of mice in morphology and function, and can receive both excitatory synaptic transmission and inhibitory synaptic transmission. Moreover, researchers observed the same phenomenon as in cell experiments: compared with control neurons, the sEPSC frequency of NLGN R451 mutant neurons was higher, but the amplitude did not differ significantly (Figure 4e-i). It is further confirmed that the effect of NLGN3 R451C mutation in human neurons is consistent with that in mice, and it also indicates that NLGN3 R451C mutation is an ASD related functional acquired phenotype. 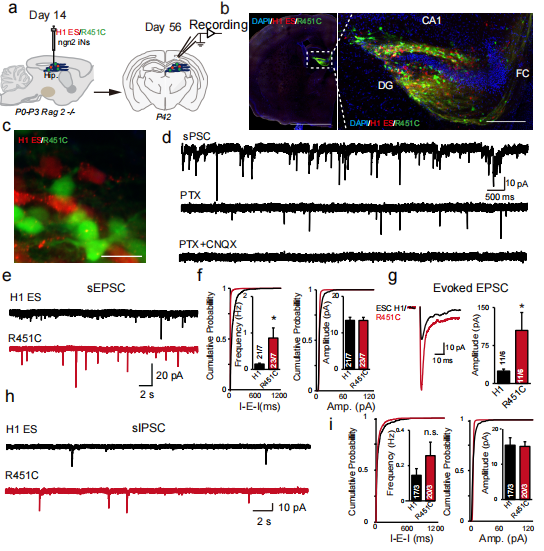 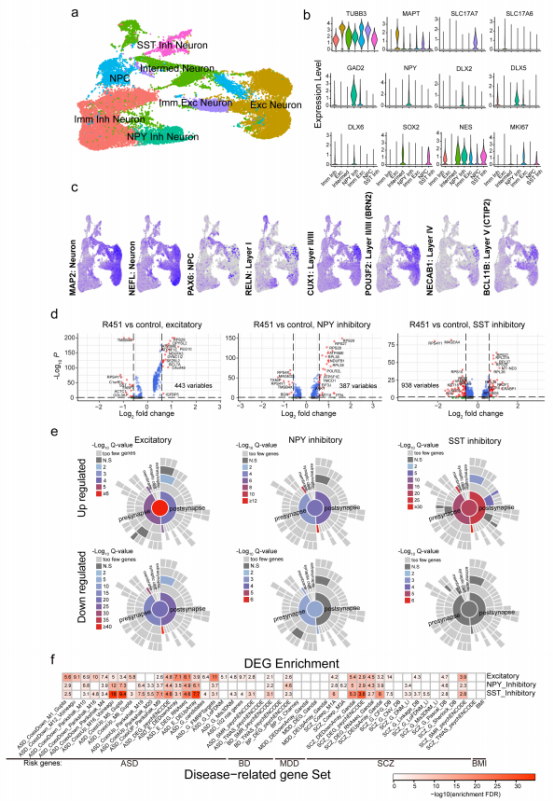 NLGN3 R451C mutation plays a key role in the physiological and pathological development of mental disorders such as SCZ, BP and ASD

In addition to gene editing services for stem cells such as H1/H9/iPSC, Ubigene also provides customized services for gene knockout, knockin, point mutation, overexpression, and RNAi of more than 200 cancer cell lines, helping to construct cell disease models. High-quality engineered cell lines can be delivered as soon as four weeks. Get a quote>>