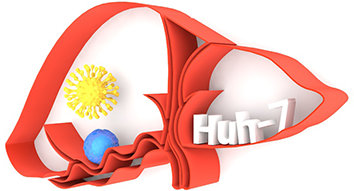 As one of the five internal organs of the human body, the liver is closely related to the body's normal metabolism, detoxification, blood coagulation, and other processes. The liver participates in the body's immunity, it is an indispensable important organ for maintaining the body's life. In the study of liver diseases, a suitable cell model is one of the important tools. However, due to the difficulties in obtaining conventional liver cells, high culture failure, and high cost of culture, the development of liver disease research has been limited. Therefore, liver cell lines with simple culture conditions and stable genetic backgrounds have become a new favorite in liver research. Huh-7 is one of the most common liver cancer line.

The Applications of Huh-7 Cell Line
The Huh-7 cell line was established by Nakabayshi H., and Sato, J. in 1982. It is a cancer cell line derived from highly differentiated hepatocytes which from the liver tumor of a 57-year-old Japanese man. Most Huh-7 cells show epithelial-like morphology and have a chromosome number between 55 and 63. Moreover, these cells are highly heterogeneous.

HuH-7 cell line can be applied to study the drug efficacy and metabolism of liver cancer drugs, and to explore the molecular mechanism of drugs.

The combination of liver cell lines and CRISPR/Cas9 technology provides new ideas for the research of cancer, drug metabolism and coronavirus!
Applying CRISPR/Cas9 to knockout Huh-7's key host factors for viral replication and exploring key genes for coronavirus replication
CypA (cyclosporin A binding protein) is an important host factor for replication of many RNA viruses. In addition, some studies showed that the replication of some viruses depends on CypA to varying degrees. These studies used different viruses, cell lines, and experimental designs, making it hard to compare one to another. Scientists have discovered the CypA dependence of three single-stranded sense RNA viruses that can replicate in Huh-7 cells, namely equine arteritis virus (EAV), human coronavirus (HCoV-229E) and Middle East respiratory syndrome coronavirus ( MERS-CoV). They compared the replication of these viruses, which were in the same parent Huh-7 cells or in the CypA gene knockout Huh-7 cells edited by CRISPR/Cas9 technology. 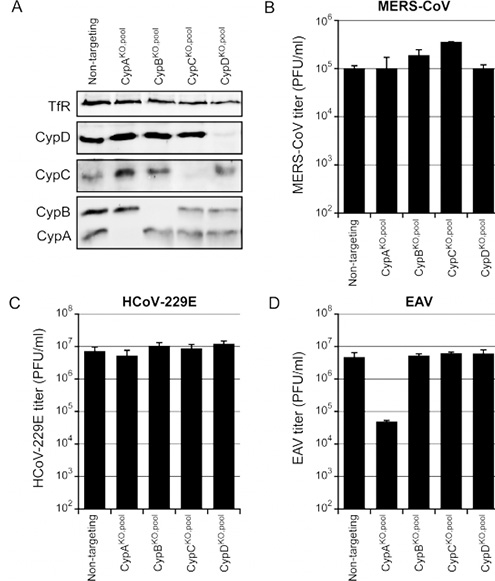 The sgRNAs targeting CypA, CypB, CypC, and CypD were transferred into Huh-7 cells by nuclear transfection, and positive cell pools were obtained after screening. Cyp KO Huh-7 cell pool was infected with MERS-CoV (B), HCoV-229E (C), or EAV (D), with 0.01 MOI. The plaque method was to determine virus production at 48h p.i. (B, C) or 32h p.i. (D). Among all four CypKO cell pools, the titer of MERS-CoV and HCoV-229E remained unchanged (B and C). After being infected in the Huh-7 CypA KO cell pool, the EAV virus titer decreased by 2-logs but did not vary in other knockout cell pools. The result proved that CypA did play an important role in the replication of EAV. 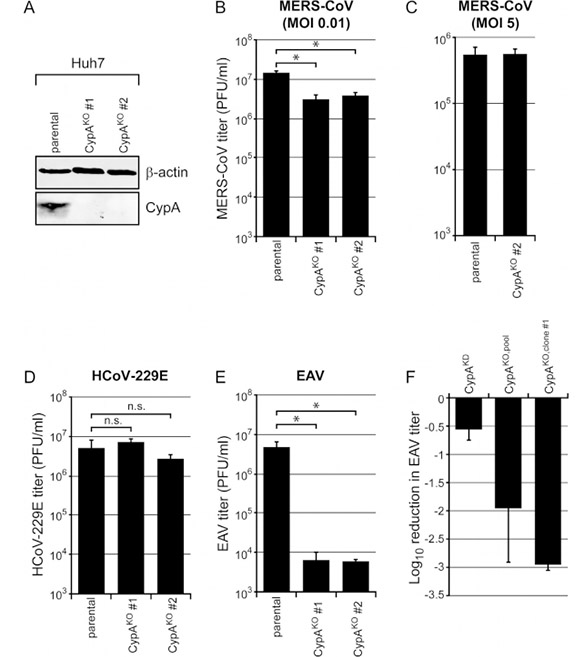 Since the Huh7 CypA-KO cell pool may have low levels of CypA expression residue, which is still sufficient to support normal levels of MERS-CoV and HCoV-229E replication. In this case, obtaining Huh7 CypA-KO monoclonals would be necessary. Different clones were chosen for target site amplification and sequencing verification, after which CypA-knockout positive clones were selected. Both wild-type Huh-7 cells and CypA-KO Huh-7 clones #1 and #2 were infected by MERS-CoV, HCoV-229E or EAV. In these two CypA-KO cell clones, the inactivation of CypA expression significantly reduced MERS-CoV replication (approximately 300%). Interestingly, in these two clones, there was no effect on HCoV-229E lacking CypA (D). However, for EAV, a ~3-log decrease in virus production (E) was observed, which showed a 10-fold stronger inhibitory effect compared to the previous Huh-7 CypA-KO cell pool.
In summary, there was no difference in the replication of MERS-CoV, HCoV-229E and EAV in the CypB-KO, CypC-KO or CypD-KO cell pools, which indicated that the replication of these viruses does not depend on CypB, CypC Or CypD in Huh-7 cells. However, similar to CypA, we cannot rule out the possibility that a very small amount of Cyp is still sufficient to support virus replication effectively. The knock-out of CypA reduced EAV production by about 3-log, while the titers of MERS-CoV progeny decreased by about 3-fol, Also, HCoV-229E replication remained the same. This study showed that the replication of different single-stranded sense RNA viruses has significant differences in CypA dependence.
CRISPR/Cas9-mediated gene knockout and point mutation in Huh-7 cell model facilitate the study of the impact of different genetic differences on drug metabolism
In vitro studies of drug metabolism and related gene mutations often use freshly isolated or frozen human/animal liver cells; however, primary liver cells are probably not the best choice because they require liver collection and are expensive. Additionally, primary liver cells are not immortalized , which leads to large differences between different kinds of the cells. In most cases, the cell lines are identical in genome. Therefore, researchers developed a CRISPR/Cas9 modified human hepatocyte cell line so as to continuously study the effects of genetic variation on drug metabolism. To study the effects of CYP3A5 mutations on the metabolism of two enzyme substrates, the sedative or anesthetic midazolam (MDZ) and the immunosuppressant tacrolimus (Tac).
About 50% of oral drugs are metabolized by CYP3A4 and CYP3A5, which are the most abundant in the liver have highly variable expression. The loss of function of CYP3A5*3 (rs776746) allele is very common among Caucasians. Tac has a comparatively lower metabolic rate than those with CYP3A5*1 genotype. However, the CYP3A5*1 allele is abundant in African Americans who have rapid metabolism of MDZ, Tac, and other drugs. Therefore, CYP3A5 genotype is vital to determine the appropriate dose of drugs.
To present, no commercial liver cell line has been diploid on chromosome 7 and can express CYP3A5*1. Huh-7 cell line can convert substrate MDZ to its metabolite hydroxylated 1-OH-MDZ and 4-OH-MDZ through CYP3A4 activity, though they are not effective in the metabolism of MDZ because of their identity as homozygote to the CYP3A5*3 allele. Therefore, it is necessary to develop a liver cell line that can simulate the rapid metabolic process of drugs that are related to the CYP3A5*1 genotype.

The gRNA, Cas9 and ssODN were co-transformed into Huh-7 cells by nuclear transfection method, followed by monoclonal selection. Different clones were selected for target site amplification and sequencing verification, while positive clones with gene knockout were selected. By knocking out or point-mutating the splice junction of the Exon-3B of CYP3A5*3, three CYP3A5*1 cell lines were obtained. 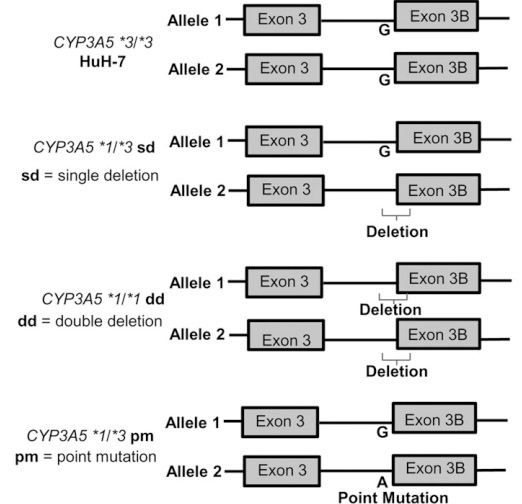 Compared with WT Huh-7, CYP3A5*1/*3sd (heterozygous KO), CYP3A5*1/*1dd (homozygous KO) or CYP3A5*1/*3pm (point mutation) express CYP3A5*1 mRNA, Both CYP3A5 mRNA and protein expression increased. Therefore, through the CRISPR/Cas9 technology, the *3 genotype was successfully transformed into the *1 genotype, thereby activating the expression of CYP3A5 in the Huh-7 cell line. This cell model can accelerate preclinical drug development, save time and money, and more accurately predict drug metabolism, pharmacokinetics, toxicity, and efficacy in different populations or genotypes.
Using CRISPR/Cas9 to knockin GFP to the Nanog in Huh-7 cells, revealing the reasons for gender differences in the incidence of hepatocellular carcinoma
Hepatocellular carcinoma (HCC) is a common malignant tumor, and its morbidity has obvious gender differences ---- the inclination to men. Studies have shown that the androgen/androgen receptor signal axis is related to the incidence of various hormone-related tumors such as prostate cancer and cervical cancer. As an important place for androgen metabolism, the liver has a high level of androgen in its microenvironment. Hepatocellular carcinoma seems to have a close relationship with the androgen/androgen receptor signal axis.
Cancer Stem Cells (CSCs) are closely related to the occurrence and metastasis of tumors. Their ability to self-renewal and unlimited proliferation is a key factor in cancer development. Studies have revealed that the pluripotency factor Nanog is involved in maintaining the dryness of CSCs. However, it is unclear whether the androgen/androgen receptor signal axis affects the dry maintenance of HCC cells through Nanog-related pathways.
The researchers found that the expression of the androgen receptor is very high in liver cancer tissues and is related to Nanog. Subsequently, the endogenous Nanog of huh7 cells was labeled with GFP by CRISPR/Cas9, which confirmed the co-localization of the androgen receptor and Nanog in HCC cells. The gRNA, Cas9, and Donor were co-transformed into huh-7 cells by nuclear transfection, followed by drug screening and monoclonal cultures selection. Different clones were chosen for target site amplification and sequencing, after which positive clones with homozygous knock-in were selected.
Through subsequent in vitro experiments, the researchers proved that the signal axis can promote the stemness of HCC cells, which would be achieved in a Nanog-dependent manner. By activating the transcription, this effect can be blocked by androgens Or AR degradation enhancer. 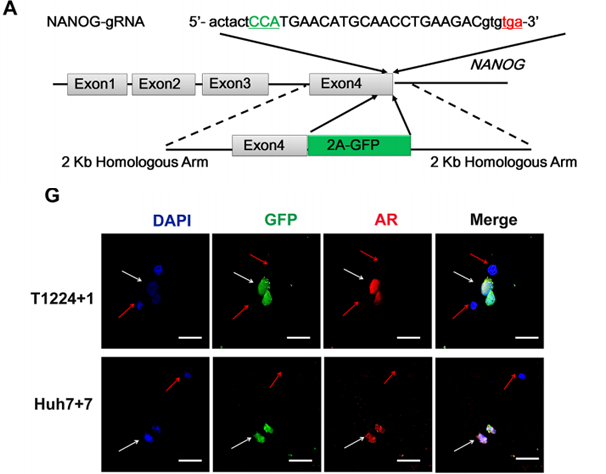 These studies show that the androgen/androgen receptor signaling axis provides evidence for the inhibition of this axis in HCC therapy by affecting the stemness of tumor cells, which also offers a possible way for the suppression of axons in the treatment of liver cancer.

CRISPR-U™ is an exclusive technology independently developed by Ubigene Bioscience for gene editing cell lines. By optimizing gene editing vectors and processes, the efficiency in gene-cutting and recombination of CRISPR-U™ is 10 times higher than the conventional CRISPR/Cas9 technology. We are capable of customizing genetically-modified liver cell lines as you desire and satisfying various needs in gene editing.