The Cell Therapy Manufacturing Asia 2020 conference was held in Kyoto in February, not long before the coronavirus epidemic led to the cancellation of many such gatherings around the globe. Attendance was diminished, and many attendees resorted to teleconferencing. Still, the event provided presenters and attendees an opportunity to share perspectives on a wide swath of topics, from scale-up and process analytics to regulatory navigation. Several representative presentations—some of which were delivered on site, and some of which were live streamed from elsewhere—are summarized in the text that follows.


Cell therapy production for many preclinical studies and some early-stage clinical studies can be accomplished in two-dimensional planar flasks or spinner flasks. Nonetheless, if commercial success is to be achieved, said Brian Lee, PhD, president of PBS Biotech, the producer must scale up manufacturing while maintaining the quality of the product as well as the cell growth. “Single-use bioreactors, he added, “are considered a much more cost-effective and scalable manufacturing platform for cell therapy products.”

Anchorage-dependent human stem cells cannot grow freely as single cells in the suspension cultures typically used for Escherichia coli or adapted Chinese hamster ovary (CHO) cells. Instead, they are grown on microcarrier beads or as cell aggregates while suspended in a bioreactor. Unfortunately, a traditional horizontal, stirred-type bioreactor can pose problems. “As the vessel size increases,” Lee noted, “the fluid dynamic characteristics are difficult to scale up while maintaining the conditions at the small scale.”

He asserted that the geometry and mixing mechanism of PBS Biotech’s Vertical Wheel™ bioreactor system is “completely different,” providing homogeneous mixing and uniform particle suspension in a very low sheer stress environment for cells. The same mixing parameters developed in a 100-mL working volume can be applied to larger-scale vessels to give a similar fluid dynamic microenvironment.

Lee shared data selected from PBS Biotech customers that had used 0.1-L (and above) bioreactors. The company has more than 100 such customers. Although they used different cell types, cell lines, media, and processes, their data, Lee asserted, “demonstrate the difference in the biological performance purely based on the bioreactor fluid dynamic function.”

Consistency of scale-up results has been shown at up to 50 L in an 80-L bioreactor, with plans for up to 400- or 500-L vertical bioreactors—sufficient for large-scale commercial manufacturing.

But does a company even have to source its own stem cells and maintain its own banks? Mayasari Lim, PhD, bioprocessing specialist at RoosterBio, argued that it may be better to industrialize this part of the supply chain “so that these companies in the cell and gene therapy space can really start focusing on developing their final products.”

Mesenchymal stem cells (MSCs) are adult stem cells that can be used in a variety of ways, for example, as pluripotent or differentiated cells; as engineered tissue, possibly genetically modified for gene therapy; or even as factories for producing extracellular vesicles (EVs).

Providing off-the-shelf cellular starting material—MSCs and optimized bioprocess media—supports RoosterBio’s “mission to fuel the rapid commercialization of scalable regenerative cures,” she said. The growth medium is formulated so that it doesn’t have to be changed every two or three days—typical in the stem cell field—which is labor intensive and costly. Instead, a nutrient supplement is added to the continuing culture for a fed-batch protocol. For harvesting EVs, RoosterCollect-EV medium is formulated with a low particle count for minimal background.

RoosterBio aims to help companies significantly shorten their clinical development timelines. “They are able to reference our master files that are already with the U.S. Food and Drug Administration,” noted Lim. “That reduces the regulatory burden and the cost. By providing them all the cells, all the media, all the starting materials, and by supporting them for their IND filing, we can help them develop the target product that they’re going after.”

Rohto Pharmaceutical, best known for its over-the-counter pharmaceuticals and cosmetics, is moving into the field of regenerative medicine. It is conducting Phase I/II studies in Japan using allogeneic MSCs as therapeutics for indications such as liver cirrhosis.

It can be frustrating not to know, while developing a cell therapy, if the process will yield the hoped-for product for release. “Potency tests need to predict clinical efficacies,” said Hidenori Nonaka, group leader of Rohto’s division of regenerative medicine. The potency test should be based on the mode of action. However, whether potency tests will accurately predict clinical efficacies may not be discovered until the late clinical stage or later.

“We know there are some parameters that can differ from one lot to another,” he continued. “But we are not sure these differences are really critical to having an effect in the patient. The challenge is, we don’t know much about the mode of action, which remains to be understood.” This should become clearer as data comes in from the clinical trials.

Rohto is looking at several different assays that can be performed on the intermediate and final products (cells) or disposed material (such as supernatant) along the way, to help find critical quality attributes that will correlate with a successful product. The company is focusing on potency tests for matters such as immunomodulatory function, differentiation capability, and senescence of the MSCs as part of a matrix of complementary measures.

Even when you know what a healthy culture should look like, it’s not always straightforward to gather information about the process in a timely fashion. “It’s not until you get to the end of the manufacturing process that you can actually understand how successful that process has been,” remarked Damian Marshall, PhD, director of new technologies for the Cell and Gene Therapy Catapult. 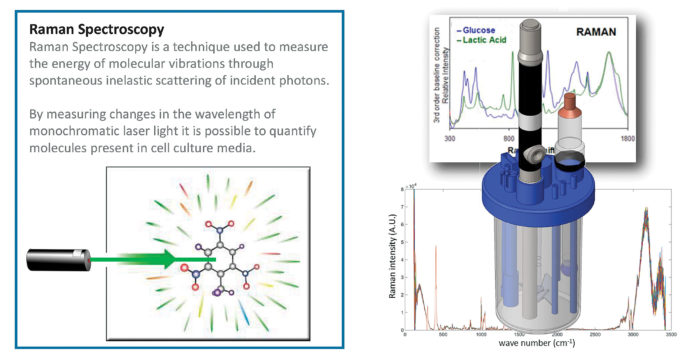 Part of the delay is due to the dearth of process information technologies (PAT)—which use timely measurement of critical process attributes to ensure final product quality—in cell and gene therapy manufacturing. “Typically,” Marshall said, “it has been retrospective.”

Marshall wanted instead to interrogate the processes that were indicative of final quality, however defined. They chose 12 metabolite markers that were expressed in the media at key points within the manufacturing process, when changes were occurring, and developed Raman spectroscopy models to detect what was happening with those markers within the culture environment. “And then we did a proof-of-concept demonstration where we actually looked at tracking all of these markers in real time within the system.”

Raman, a technology that can be deployed in real time, was chosen as a starting point rather than another technology that would involve “taking samples and doing an offline analysis,” he explained. It’s much less affected by the signal that comes back from water in the culture medium than are near- or mid-IR spectroscopy. “We also wanted a technology that had been demonstrated in a GMP environment,” Marshall noted.

The next step, Marshall indicated, is to use the PAT information for making processing decisions: “It’s the concept of adaptive manufacture.”

As the field moves forward, there is little question of the utility of PAT for process monitoring and quality control. “[But identifying] tools that are fast, precise, robust, and cost-effective is still a challenge,” observed Katleen Verleysen, PhD, strategic partnerships life sciences, IMEC.

IMEC focuses on digital and nanoelectronics, developing technologies that manufacturers can incorporate into their own processes. “We get to play around with silicon chips,” she remarked.

Silicon is flexible, easy to parallelize, and disposable. “You can have all the necessary functionalities incorporated on your disposable so that you don’t have to have these in your instruments,” she elaborated. “I’m talking about the electronic boards, all the optics, and everything.”

Verleysen presented concepts such as miniaturized liquid sensors, on-chip Raman spectrometers, lens-free imaging microscopes, and rapid contaminant detection and identification. And these disposable chip-based technologies are not restricted to PAT. For example, IMEC has developed a cell sorter that can do label-free sorting based on a holographic image, obviating the need for magnetic beads or fluorescent tags, which have the potential to contaminate the sample. These technologies are either currently available or under development.

She hopes that miniaturization, parallelization, and multiplexing of these functionalities can reduce the need for sampling, open possibilities for continuous monitoring of multiple parameters, and lead to better quality control.

Most cell therapies—including CAR T-cell therapies, for example—are autologous, derived from the patient. Among the appeals of an allogenic cell therapy, on the other hand, is that the starting material can be obtained from unrelated donors, meaning that the final product need not be restricted to the donor from whom it was derived. This allows for a potentially unlimited supply to be generated in bulk and then stored in individual doses as an essentially ready-to-use off-the-shelf product.

Antonio S.J. Lee, PhD, global head of business development for Medipost, a Korean stem cell therapy company, and CEO of the company’s Medipost America subsidiary, discussed the challenges of navigating the regulatory environments of distinct geographical regions. He highlighted Medipost’s experience bringing an allogeneic stem cell product to market in Korea. The product, called Cartistem®, incorporates mesenchymal stem cells derived from human umbilical cord blood. It was approved by South Korea in 2012 for the treatment of cartilage defects such as osteoarthritis and has been engrafted in over 13,000 patients to date with no adverse events reported.

“The requirements and expectations regarding safety and efficacy of each batch of manufactured cell therapy batches are slightly different between regulatory agencies,” Lee commented. Recent meetings with regulatory agencies in Japan and the United States both “provided positive feedback on our proposed Phase III clinical trial design,” he noted, but he was unable to elaborate on the technical details due to confidentiality concerns.