If you want to "clean up" in the recombinant protein business, you might want to start by sweeping away process-related impurities, specifically, host cell proteins (HCPs). Undesirable HCPs are generated by host cells along with desirable biotherapeutic proteins, increasing metabolic demand, degrading product quality, and contaminating the final product. They also necessitate troublesome (and expensive) purification procedures.


In other words, you can clean up now, or clean up later. To make "now" an option, researchers from the University of California, San Diego (UCSD), and the Danish Technical University (DTU) have introduced a broom of sorts: a CRISPR-Cas-mediated gene-editing approach that can eliminate up to 70% of the contaminating protein by mass in recombinant-protein drugs.

The researchers demonstrated the value of cleanliness in mammalian cells—Chinese hamster ovary (CHO) cells. By using CRISPR-Cas to disrupt multiple genes and thereby suppress the production of HCPs, the researchers achieved a significant decrease in purification demands across the CHO cell lines they investigated. Such tidiness, the researchers suggested, could lead to lower production costs and higher quality drugs. 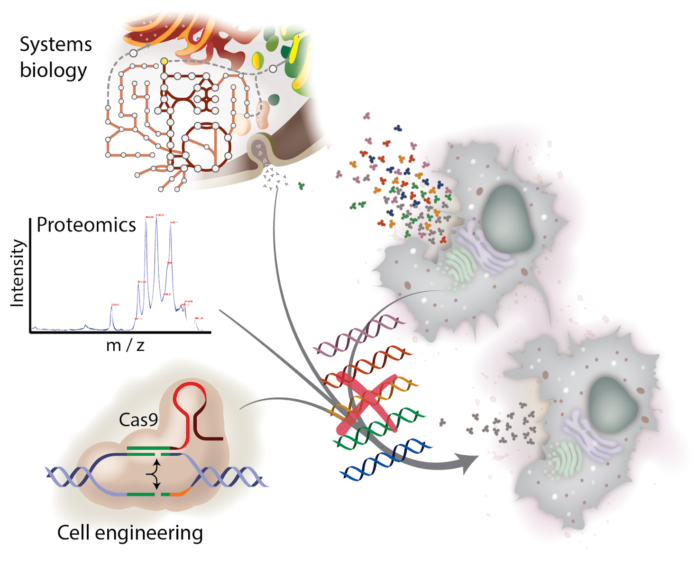 Recombinant proteins currently account for the majority of the top drugs by sales, including drugs for treating complex diseases ranging from arthritis to cancer and even combating infectious diseases such as COVID-19 by neutralizing antibodies. However, the cost of these drugs puts them out of reach of much of the world population. The high cost is due in part to the fact that they are produced in cultured cells in the laboratory. One of the major costs is purification of these drugs, which can account for up to 80% of the manufacturing costs.

“Cells, such as Chinese hamster ovary (CHO) cells, are cultured and used to produce many leading drugs,” explained Nathan E. Lewis, PhD, senior author of the current study and co-director of the CHO Systems Biology Center at UCSD. “However, in addition to the medications we want, the cells also produce and secrete at least hundreds of their own proteins into the broth. The problem is that some of these proteins can degrade the quality of the drugs or could elicit negative side effects in a patient. That’s why there are such strict rules for purification, since we want the safest and most effective medications possible.”

The HCPs that are secreted are carefully removed from every batch of drug, but before they are removed, they can degrade the quality and potency of the drugs. The various steps of purification can remove or further damage the drugs.

“Already at an early stage of our research program, we wondered how many of these secreted contaminating host cell proteins could be removed,” recounted Bjorn Voldborg, study co-author and head of the CHO core facility at the Center of Biosustainability at the DTU.

In 2012, the Novo Nordisk Foundation awarded a large grant, which has funded groundbreaking work in genomics, systems biology, and large-scale genome editing for research and technology development of CHO cells at the DTU and UCSD. This funded the first publicly accessible genome sequences for CHO cells, and has provided a unique opportunity to combine synthetic and systems biology to rationally engineer CHO cells for biopharmaceutical production.

“Host cell proteins can be problematic if they pose a significant metabolic demand, degrade product quality, or are maintained throughout downstream purification,” explained Stefan Kol, lead author on the current study who performed this research while at DTU. “We hypothesized that with multiple rounds of CRISPR-Cas-mediated gene editing, we could decrease host cell protein levels in a stepwise fashion. At this point, we did not expect to make a large impact on HCP secretion considering that there are thousands of individual HCPs that have been previously identified.”

This work builds on promising computational work published earlier in 2020.

Researchers at UCSD had developed a computational model of recombinant protein production in CHO cells, published earlier this year in Nature Communications. Jahir Gutierrez, a former bioengineering PhD student at UCSD, used this model to quantify the metabolic cost of producing each host cell protein in the CHO secretome, and with the help of Austin Chiang, a project scientist at UCSD, showed that a relatively small number of secreted proteins account for the majority of the cell energy and resources. Thus, the idea to eliminate the dominant contaminating proteins had the potential to free up a non-negligible amount of cellular resources and protect drug quality.

In their paper, which demonstrated the potential of this idea, the scientists offered the following observations: “The reduced HCP content facilitates purification of a monoclonal antibody. Thus, substantial improvements can be made in protein titer and purity through large-scale HCP deletion, providing an avenue to increased quality and affordability of high-value biopharmaceuticals.”