New genome-editing technologies developed by researchers in J. Keith Joung's laboratory at the Massachusetts General Hospital (MGH) have the potential to help understand disease-associated genetic mutations that are based on C-to-G (cytosine to guanine) single base changes. The new base editors are also designed to minimize unintended ("off-target") mutations that could potentially cause undesirable side effects.


The proof-of-concept C-to-G base editor, called CGBE1, and a smaller version, miniCGBE1, are described in a paper by co-first authors Ibrahim C. Kurt and Ronghao Zhou that was published online in the journal Nature Biotechnology. 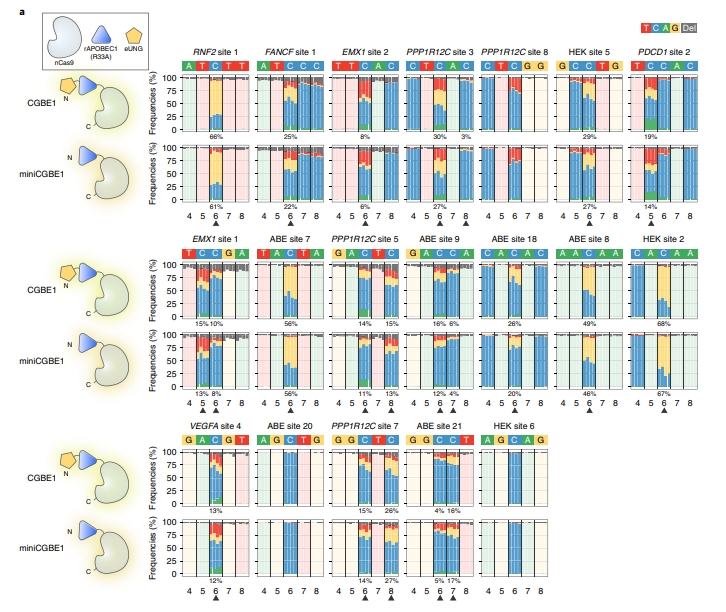 CRISPR (clustered regularly interspaced short palindromic repeats) is a gene-editing technology first discovered as a defense mechanism in bacteria and then harnessed by scientists as a tool for snipping out and/or repairing DNA sequences. The first CRISPR techniques relied on creating and repairing double-strand DNA breaks.

"Base editing is a new form of CRISPR gene editing that was developed by David Liu's lab at Harvard University and the Broad Institute. It is not based on introducing a double-stranded break in DNA, but is rather focused on directly changing a single base in DNA," explains co-corresponding author Julian Grünewald, MD, of the MGH Molecular Pathology Unit and Harvard Medical School (HMS).

Base editors are fusion proteins that use a modified form of CRISPR-Cas that is targeted to a specific target site with the help of a guide RNA, where it then deploys an enzyme called a deaminase to modify a specific base to create a desired DNA change. For example, the technique can be used to convert a cytosine (C) base to a thymine (T) base, both bases within the pyrimidine class (performed with a cytosine base editor, or CBE). Similarly, an adenine base editor (ABE) is capable of converting an adenine (A) to a guanine (G), both being purine bases.

The new CGBE1 tool incorporates the deaminase from this SECURE-CBE variant, which together with other components enables the technically challenging swapping of bases from one class to another while still minimizing the risk of unwanted changes.

"There are known disease-associated mutations or pathogenic mutations that could be fixed by this type of editing," Grünewald says.

However, the exact number of diseases that might be correctable with CGBE1 or a similar editing platform is unclear.

"We're still at an early stage with this new class of transversion base editors; CGBE1 still requires additional optimization and it would be premature to say this is ready for the clinic. But we envision that CGBE1 could be useful for research applications, enabling the introduction of specific C-to-G mutations," he says.

Materials provided by Massachusetts General Hospital. Note: Content may be edited for style and length.