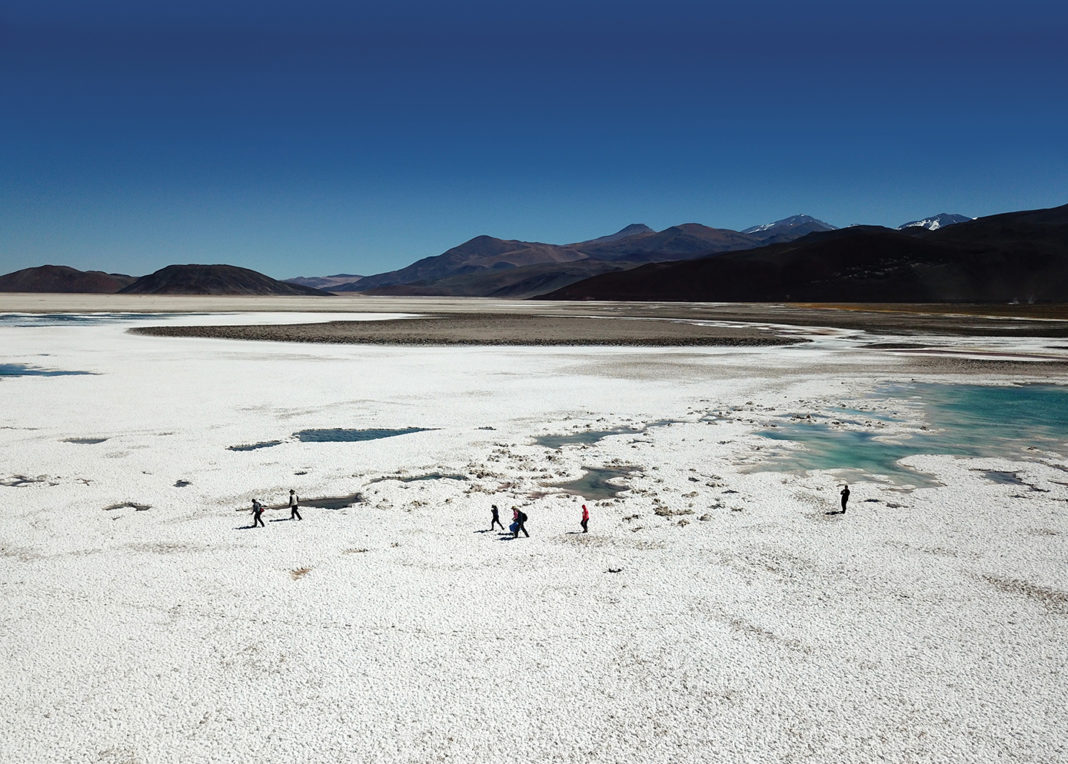 Just seven years ago, the Broad Institute’s Feng Zhang, PhD, and Harvard geneticist George Church, PhD, separately demonstrated that in human cell cultures, genome editing could be performed using a CRISPR system. CRISPR, which stands for clustered regularly interspaced short palindromic repeats, first came to light as part of a naturally occurring defense system in bacteria. CRISPR DNA in bacteria includes repetitive elements and spacer elements, the latter of which encode RNA molecules that complex with a CRISPR-associated (Cas) nuclease and guide it to viral targets, that is, viruses that possess genetic material complementary to guide RNA.


After Zhang and Church showed that CRISPR-Cas9, one of the crude adaptive immune systems found in bacteria, had potential as a genomic engineering tool, many developers followed their lead. Early CRISPR startups—such as Editas Medicine, CRISPR Therapeutics, and Intellia Therapeutics—went public and have since prospered. And now a new crop of startups is showing that there’s still plenty of room for innovation.

Each of the new CRISPR startups features a unique twist on the original CRISPR formula. Examples of CRISPR twists include exotic enzymes and novel, sophisticated editing mechanisms. In this article, we present five CRISPR startups. Their applications range from making vegetables taste better to diagnosing COVID-19 in low-resource settings.

Making safe organs for transplant
Inactivation of viruses is a logical extension of the natural function of the CRISPR-Cas9 system, and it offers a unique solution for an old problem: the shortage of human organs and tissues for transplant. Xenotransplantation of organs from pigs into humans has been contemplated for over a century. Pig organs are comparable to human organs in size and function, and pigs can be bred in large enough numbers to fill the need for organs. But progress in xenotransplantation ground to a halt in the 1990s due to the presence of porcine endogenous retroviruses (PERVs) in the pig genome.

In 2017, a group led by George Church and Luhan Yang successfully inactivated all the PERVs in a porcine primary cell and created PERV-inactivated pigs by somatic cell nuclear transfer (cloning). The pair founded a new company, eGenesis, which is dedicated to the development of safe transplantable organs, tissues, and cells by using CRISPR gene editing to inactivate PERVs. 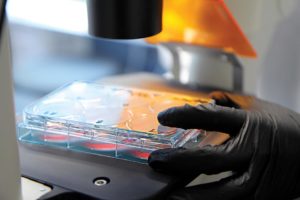 William Westlin, PhD, executive vice president of research and development for eGenesis, says that the company has produced over 350 genetically modified pigs, some of which are now a couple of years old. “We make anywhere from tens to hundreds of modifications to the genome by deleting porcine genes, inserting human genes, and humanizing porcine genes,” he details. “It’s a multiplex approach. The clinical product will combine immunological modifications on a background of inactivated endogenous retrovirus.”

Westlin estimates that within a couple of years, eGenesis will begin clinical studies on their lead kidney and pancreatic islet cell programs. The company plans to expand its product offerings to applications such as heart, liver, corneal, retinal, and neural cell xenotransplantation.

Although CRISPR-Cas9 is the best known and most widely used CRISPR system, other CRISPR systems exist in nature—systems that are being pursued by Caspr Biotech, a company that is developing diagnostics based on novel CRISPR enzymes discovered in extreme environments around the world. Caspr’s co-founder and CEO Franco Goytia says that the company has mounted expeditions throughout South America and Antarctica searching hostile environments (such as deserts, high altitude regions, and environments with high salinity and high UV radiation) for organisms with novel CRISPR systems. The company’s portfolio of enzymes includes unique functionalities which typically correlate with the enzymes’ original environments.

As an example of that functionality, Goytia says that many CRISPR systems operate at temperatures around 37°C. However, those temperatures are not compatible with isothermal amplification, which functions best at 62–64°C. “Having anything that can tolerate that higher temperature,” Goytia notes, “is something that is very strategic for amplification.”

The onset of the COVID-19 pandemic presented significant challenges, but also a great opportunity, since Caspr had the tools to quickly develop a diagnostic kit for detection of SARS-CoV2 RNA. “Our team was basically six or seven people,” Goytia recalls. “When COVID-19 emerged, we knew that this was a perfect application, and that there would be a widespread need for more kits that had a further accessibility component.”

Caspr set up an aggressive development timeframe to build a prototype kit and then produce and deploy at scale. Within three months, the company had submitted an emergency use authorization application to the FDA. The kit combines a reverse transcription step, isothermal amplification, and CRISPR-Cas enzyme target detection in a kit that is portable, accessible in a low-complexity or low-resource setting, and capable of completing analyses in less than 60 minutes. The kit does not require quantitative polymerase chain reaction (qPCR) equipment or reagents, just a fluorescence plate reader and simple laboratory equipment such as a heat block and micropipettes.

Goytia indicates that instead of focusing on a specific target, the company is developing a platform. Programs in the pipeline include those addressing dengue fever, zika virus, hantavirus, and antibiotic-resistant superbugs. Caspr also plans to expand to industries outside of healthcare such as agriculture.

Verve Therapeutics was founded in 2018 by Sekar Kathiresan, MD, and other researchers in the area of cardiovascular genetics including Kiran Musunuru, MD, PhD, and J. Keith Joung, MD, PhD. An initial $58.5 million investment allowed the company to license base editing technology from Beam Therapeutics, and CRISPR technology from Harvard University and the Broad Institute.

As a professor of medicine at Harvard Medical School, Kathiresan led a research effort that uncovered eight genes harboring what he calls resistance mutations. “As a result of the mutation, the gene is turned off,” says Kathiresan. He adds that people who carry the mutation have low cholesterol throughout life and are “remarkably protected against heart attack.”

Verve’s pipeline is based on those eight genes harboring resistance mutations. The company’s lead product consists of a lipid nanoparticle that encloses CRISPR mRNA and a guide RNA. It is designed to turn off the target gene in the liver cell.

In standard CRISPR-Cas9 editing, the enzyme cuts both strands of DNA, and then the cell’s innate DNA repair mechanisms introduce sequence changes at those target sites. With base editing, a Cas9 that has had its cutting ability disabled is paired with a second enzyme that changes a single base from one letter to another, from adenine (A) to guanine (G), for example.

So far, the company’s design works. After obtaining positive results in mouse models, Verve recently reported results from a proof-of-concept study in 14 nonhuman primates showing a 59% reduction in blood LDL cholesterol levels for one program targeting PCSK9. For another program targeting ANGPTL3, blood triglycerides were lowered by 64% and LDL cholesterol was reduced 19%. Additionally, in primary human hepatocytes, there was no evidence of off-target editing. Verve expects to progress to first-in-human studies within three years.

CRISPR for fruits and vegetables

Pairwise is another company with technology licensed from Harvard and the Broad Institute, plus Massachusetts General Hospital. Unlike Verve, Pairwise has gone in the direction of agriculture, using CRISPR gene editing to make healthy fruits and vegetables more palatable. Tom Adams, PhD, is Pairwise’s CEO and co-founder with Haven Baker, PhD.

The company received startup funding from Monsanto (now Bayer) and Deerfield Capital. In addition to collaborating with Bayer on traditional corn and soybean projects, Pairwise is staking out its own territory in fruit and vegetables. “Our view was there’s not been nearly as much innovation and as much technology put into produce as into corn and soybean,” Adams relates. “It’s sort of reflected in the fact that people don’t eat the vegetables that they are supposed to. We thought there was a real opportunity with gene editing to create some novel, consumer-based traits in produce.”

Specifically, Pairwise is developing products in leafy greens. Its first leafy green product will be a form of mustard greens that lacks the sharp flavor of conventional mustard greens. Unlike kale and other high-nutrient greens that have relatively low yields when compared to less nutritious lettuces such as romaine and iceberg, the new mustard greens have both high nutrient content and high yields. Pairwise is also developing seedless blackberries and pitless cherries while exploring additional ways to bring new varieties to market.

Besides initiating its product development programs, Pairwise has sequenced 700 varieties of berries as part of a public-private consortium. “Ninety-nine percent of traits in berries are caused by changes in the coding sequence of the gene, rather than outside the coding sequence,” Adams notes. “Our technology is extremely well suited to deliver the things that we want to do because we can effectively edit within the gene sequences.”

Whereas CRISPR-Cas9 is well known as a tool for gene editing, other CRISPR enzymes are emerging with different functions and applications beyond gene editing. Locus Biosciences is developing antibacterial products based on CRISPR-Cas3 to pursue indications against both conventional bacterial pathogens and microbiome applications. 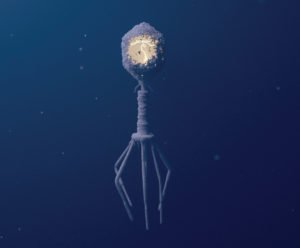 One of the company’s products is called CRISPR-phage or crPhage. This product uses engineered bacteriophages that specifically infect bacteria and are enhanced by using a unique CRISPR-Cas3 system to target the bacterial genome.

“Cas3 is an exonuclease,” says Joseph Nixon, senior vice president of business development for Locus. “It is different from other CRISPR systems because it unzips, unwinds, and shreds targeted genomic DNA in bacterial cells, thereby killing those cells because they not able to repair the extensive damage from Cas3.”

Locus was founded by Paul Garofolo and Dave Ousterout, PhD, in 2015 with Cas3 technologies licensed from North Carolina State University and Duke University. The company is rapidly advancing into the clinic, with its lead antibacterial product currently in Phase I clinical testing for treating urinary tract infections caused by Escherichia coli.

“Our ongoing trial is one of the first well-controlled clinical studies for phage therapy,” asserts Paul Kim, PhD, chief development officer at Locus. “It represents an exciting step toward helping patients suffering from multidrug-resistant and recurring infections.”