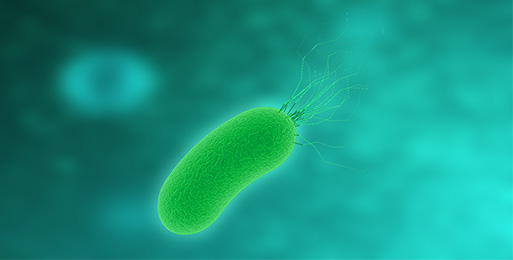 Pseudomonas aeruginosa is a encapsulated, Gram-negative, rod shaped bacterium. P. aeruginosa is a major human pathogen and is capable of causing severe infections in vulnerable patients hospitalized with cystic fibrosis, burns, acquired immunodeficiency syndrome, or cancer. One of the most worrisome characteristics of P. aeruginosa is its low antibiotic susceptibility, which is attributable to a concerted action of multidrug efflux pumps with chromosomally encoded antibiotic resistance genes (e.g., mexAB, mexXY, etc.) and the low permeability of the bacterial cellular envelopes. So, the increasing prevalence of multidrug-resistant (MDR), extensively drug resistant (XDR), and pandrug-resistant (PDR) P. aeruginosa poses a grim challenge to antimicrobial therapy. Extensive research has been focused to dissect the molecular basis of the infection mechanisms and to develop novel therapeutic means against P. aeruginosa infections. Meanwhile, P. aeruginosa represents a model organism for biological study of biofilm formation, quorum sensing, drug target and metabolic engineering.

RAW264.7 is the most commonly used in vitro model for the selection of active compounds with anti-inflammatory and studying inflammation. RAW264.7 cells can mimic inflammatory reaction and release or upregulate a variety of inflammatory mediators, such as nitric oxide (NO), cyclooxygenase-2 (COX-2), tumor necrosis factor - α (TNF - α), interleukin-6 (IL-6) and so on. 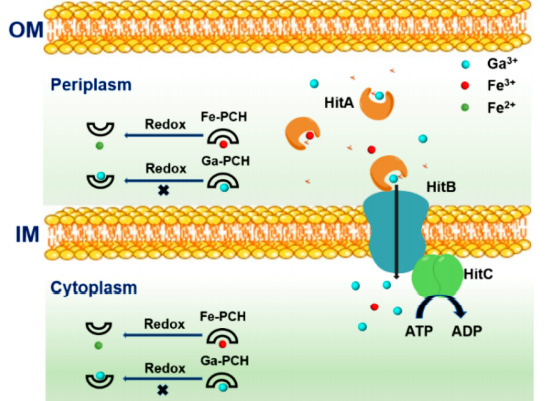 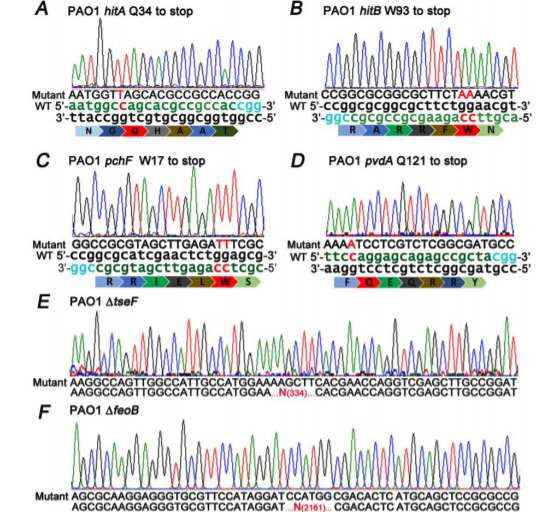 The researcher analyses the effects of Ga(III) on the growth of wild-type (WT) and different PAO1 mutants. The minimal inhibitory concentrations (MICs) of Ga(NO3)3 against different strains in iron-deficient medium. They also analyze the effect of different iron acquisition pathways on gallium uptake of PAO1 and PAO1Δtesf mutants. A substantial decline of the intracellular iron level was also observed in this double mutant strain (Fig 3B) indicate that HitABC transporter is the major contributor for iron uptake in P. aeruginosa.


HitA is a soluble ferric iron-binding protein located in the bacterial periplasm and binds a single Fe3+ with high affinity. HitA could exert a similar role in the Ga3+ uptake process. To uncover the phenomena, they apply cellular thermal shift assay (CETSA) observed that Ga3+ can binding of HitA in vivo. Afterward, they performed metal competition assay and observed that Fe3+ could readily replace Ga3+ from Ga3+-HitA protein. The researcher generates high resolution crystal structures of apo-HitA and Fe3+-bound and Ga3+-bound HitA proteins. The structure of Ga3+-HitA resembles that of Fe3+-HitA with backbone root-mean-square deviation (RMSD) of 0.268 Å. The coordination sphere of Fe3+ is almost the same as that identified in the Ga3+ site, consisting of the four residues (His39, Glu87, Tyr223, and Tyr224), one water molecule, and a phosphate ion as the monodentate ligand. The structural data confirmed that Ga3+ could mimic Fe3+ to occupy the metal-binding site of HitA.

Fig 4: Superimposition of two chains of Fe3+ -HitA and Ga3+ -HitA from one asymmetric unit. The metal coordination spheres are identical in two chains.

Ubigene developed CRISPR-B™ which optimizes the microbial gene-editing vectors and process. The efficiency and accuracy are 20x higher than traditional methods. CRISPR-B™ can be used in gene editing of bacteria and fungi. Contact us immediately to know about your research related services!

Identification and characterization of a metalloprotein involved in gallium internalization in Pseudomonas aeruginosa. ACS Infect Dis 2019, 5(10):1693-1697.