Pluripotent stem cells can give rise to all cells and constitute the mature organism. These specialized cells can be cultured in vitro and are referred to as embryonic stem cells (ESCs). ESCs have undergone a great revolution in developmental biology. These in vitro grown ESCs exhibit the potential to generate all lineages of the embryo in vivo and can give rise to any type of somatic cells such as cardiomyocytes, smooth muscle cells, endothelial cells, neuronal cells and hepatocytes upon in vitro differentiation. The advantages of embryonic stem (ESCs) cells over other cell types are their accessibility to genetic manipulation. They can easily undergo genetic modifications while remaining pluripotent, and can be selectively propagated, allowing the clonal expansion of genetically altered cells in culture. Human ESCs gained popularity as a valuable cellular source for the treatment of many degenerative diseases such as ischemic heart failure, Parkinson’s disease, Alzheimer’s disease, diabetes, spinal cord injuries and age-related macular degeneration. In 2010, first time human ESCs were employed to treat spinal cord injuries and there after a dozen clinical trials have been conducted with human ESCs to treat severe ischemic left ventricular dysfunction, age-related macular degeneration, Parkinson’s disease and diabetes, among other degenerative conditions.

However, the human ESC-based clinical trials suffer immensely from the ethical concerns regarding the use of cells of embryonic origin as well as from failed in vitro fertilized embryos that could result in abnormal development, and from the concerns of immune rejection after transplantation due to the allogenic origin of ESCs. Takahashi and Yamanaka (2016) made a breakthrough discovery of reprograming somatic cells to pluripotent state. In their study, somatic cells such as skin biopsy derived fibroblasts and peripheral blood derived T lymphocytes were reprogrammed through the forced ectopic expression of the transcriptional factors OCT4, SOX2, KLF, c-MYC, NANOG and LIN28. These cells, termed as induced pluripotent stem cells (iPSCs), exhibit similar gene expression, epigenetic profile and the differentiation potential to give rise to any type of somatic cells as that of ESCs.

ESCs and iPSCs have wide application in Bio-medical research.

Platelet transfusion is an essential treatment for patients with thrombocytopenia. Alloimmune platelet transfusion refractoriness (allo-PTR) is observed in approximately 5%–15% of patients who receive platelet transfusion, with the most dominant cause being the production of alloantibodies against human leukocyte antigen class I (HLA-I).  In such HLA-I-mediated allo-PTR, transfused platelets are immediately rejected, except for HLA-I-compatible platelets. However, the need to select compatible donors limits the supply, with the most difficult cases being rare HLA-I types. Human induced pluripotent stem cells (iPSCs) have been extensively studied as an ex vivo source for producing human cells and tissues and iPSC-derived platelets (iPLATs) have the potential to resolve the aforementioned issues in current transfusion systems. In the present study, CRISPR/Cas9 mediated HLA-KO iPLATs were generated by knocking out HLA-I complex molecule β2-microglobulin (B2M). Exon 1 of B2M was selected as the knockout target.  For KO B2M, the researcher constructed sgRNA expression vector (pHL-H1-B2M-sgRNA-mEF1a-RiH), CRISPR/Cas9 expression vector (pHL-UbicP-SphcCas9-iP-A) and transfected MK-iPSCs to generate HLAKO iPLAT.  HLA-KO iPLATs were deficient for all HLA-I but did not elicit a cytotoxic response by NK cells in vitro and showed circulation equal to wild-type iPLATs upon transfusion in humanized mice model (Hu-NK-MSTRG) reconstituted with human NK cells. This study revealed the unique non-immunogenic property of platelets and provides a proof of concept for the clinical application of HLA-KO iPLATs. 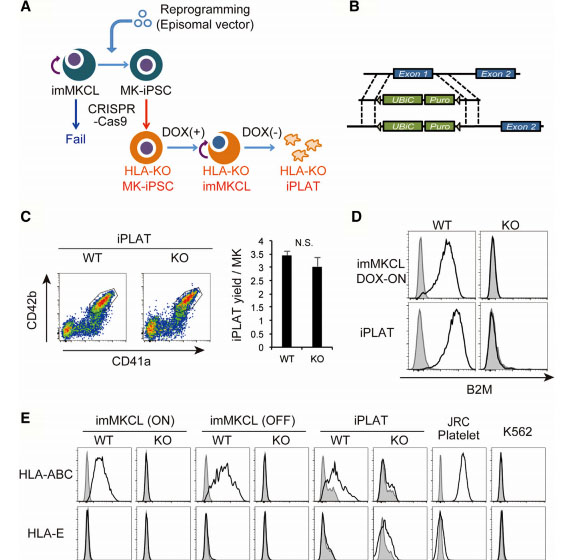 Dystrophic epidermolysis bullosa (DEB) is a rare genetic skin fragility disorder characterized by blistered skin and mucosa that can be inherited in either a dominant (DDEB) or recessive (RDEB) manner. DEB is caused by mutations in the COL7A1 gene that encodes type VII collagen (C7), a crucial protein that forms anchoring fibrils (AFs) that stabilize dermal-epidermal adhesion at the basement membrane zone (BMZ).  Patients with RDEB lack functional C7 and have severely impaired dermal-epidermal stability, resulting in extensive blistering and open wounds on the skin that greatly affect the patient’s quality of life. There are currently no therapies approved for the treatment of RDEB. The researcher, used CRISPR system to modify induced pluripotent stem cells (iPSCs) derived from patients with RDEB in both the heterozygous and homozygous states and corrected mutations in exon 19 (c.2470insG) and exon 32 (c.3948insT) in the COL7A1 gene through homology-directed repair (HDR). They found that three-dimensional human skin equivalents (HSEs) were generated from gene-corrected iPSCs, differentiated into keratinocytes (KCs) and fibroblasts (FBs), and grafted onto immunodeficient mice, which showed normal expression of C7 at the BMZ as well as restored AFs 2-month post grafting. There findings represent a crucial advance for clinical applications of innovative autologous stem cell-based therapies for RDEB. This finding could serve as a foundation to translate this treatment into the clinic.

Biallelic Gene Correction of the Homozygous and Heterozygous Mutations in the COL7A1 Gene by CRISPR/Cas9 Plasmid approach and RNP approach:

The researchers employed two CRISPR-mediated genome editing approach for correction of COL7A1 gene mutation in homozygous and heterozygous state of iPSCs.  They applied biallelic gene correction in homozygous iPSCs with CRISPR/Cas9 plasmid approach. They evaluate the efficacy of gene correction in exon 19 of COL7A1 gene in iPSC-derived cells. They found that 10% of the clones had undergone biallelic correction and 40% of clones had undergone monoallelic correction of the COL7A1 mutation in exon 19. The sequence analysis directed that the target sequence areas were free of off-target mutations. To improve correction efficiency, the researcher used the Cas9 protein and a chemically modified synthetic gRNA as a RNP complex. By using RNP approach, they achieved 58% biallelic and 42% monoallelic correction for the homozygous mutation (c.2470insG) in exon 19 of COL7A1, and 19% biallelic and 48% monoallelic correction for the heterozygous mutation (c.2470insG/ c.3948insT) in exons 19 and 32 of COL7A1, respectively. This strategy creates a “scarless” phenotype without leaving a residual footprint and generate a very high efficiency in single iPSCs without evidence of off-target activity. 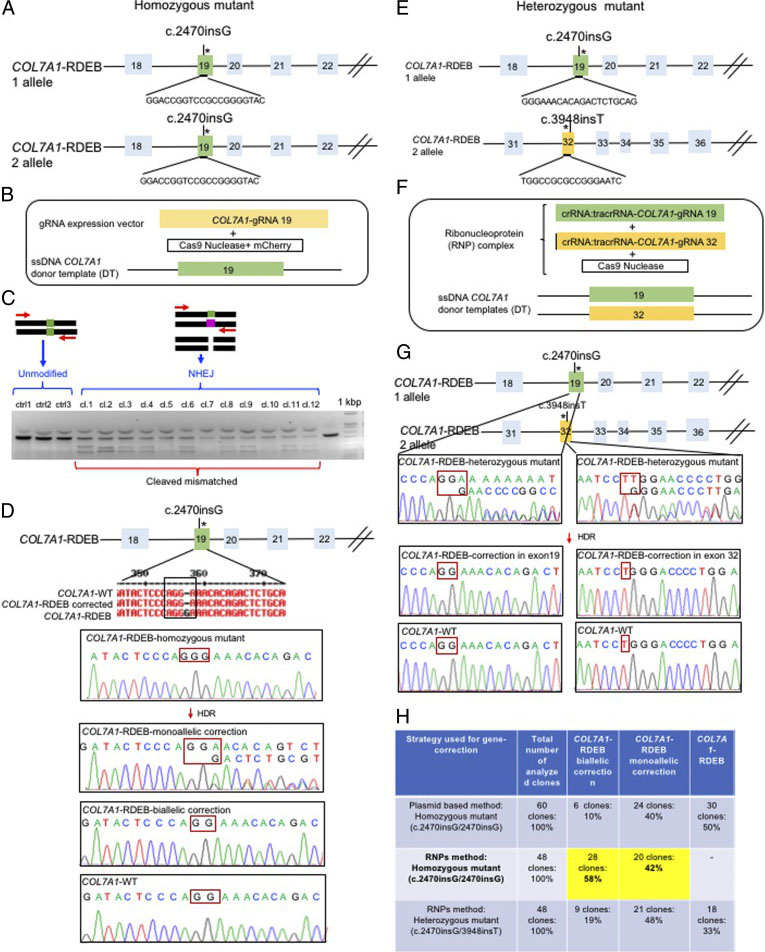 The researcher established protocol for generating keratinocytes (iKCs) and fibroblasts (iFBs) from RDEB patient-derived iPSCs. They observed that functional iKCs need 60 days for maturation invitro and 96% of iPSC-derived KCs (iKCs) expressed keratin 14, and 50% of the 96% had high levels of p63 expression. Besides that, they obtained iFBs from iPSCs after 31 days differentiation. They observed that more than 90% of iPSC-derived iFBs with expression patterns consistent with those of normal human FBs. The 3D skin, derived from gene-corrected iKCs and iFBs, was then grafted onto immunodeficient mice and analyzed 2-month postgrafting. They analyze the expression of C7, epidermal differentiation markers such as keratin 14, keratin 10, loricrin, filaggrin, and vimentin. The iPSC-derived corrected xenografts expressed C7 and fully resemble the WT skin, demonstrating that the gene correction restored the protein function in iPSC-derived iKCs and iFBs. 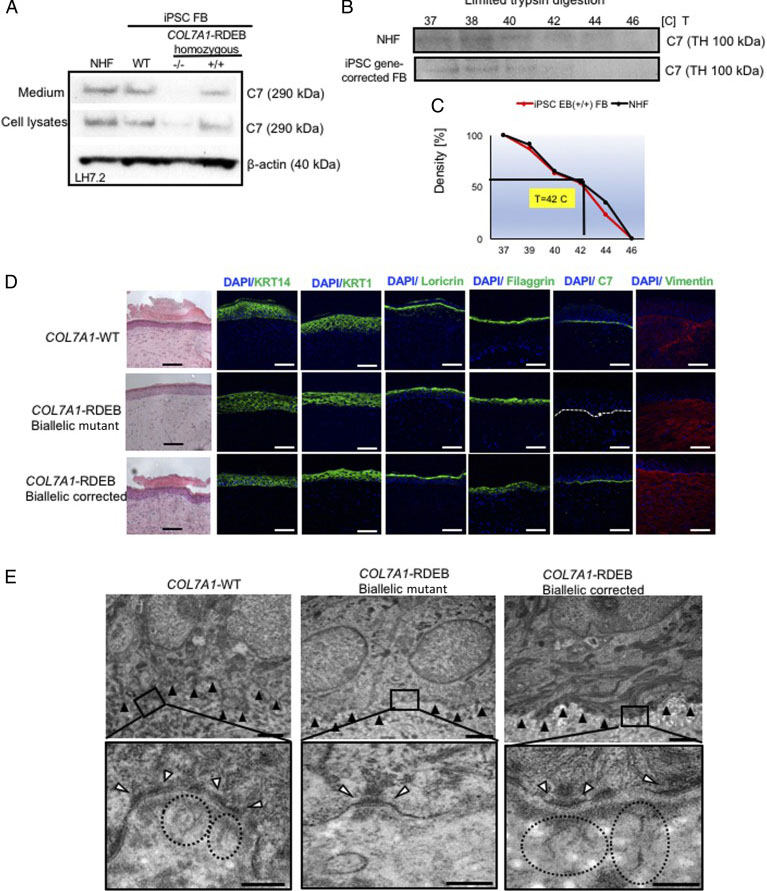 Limb girdle muscular dystrophy type 2A (LGMD2A) is an autosomal recessive inherited disorder and the most common form of LGMD. LGMD2A occurs due to loss of functional Calpain 3 (CAPN3), a skeletal muscle-specific isoform of the calcium-sensitive Calpain cysteine protease family. The researcher used CRISPR-Cas9 mediated genome editing to iPSCs from three LGMD2A patients to enable correction of mutations in the CAPN3 gene. A CRISPR mediated gene knockin approach were used to edit iPSCs genome carrying three different CAPN3 mutations, and rescue CAPN3 protein in myotube derivatives in vitro. To corrected the mutation, the researcher used guide RNA sequence that targeting CAPN3-exon 14 (50 -CATCTCCGTGGATCGGCCAG-30) cloned in pX458 vector. HDR donor vector was constructed in the pBluescript plasmid backbone with selection cassette of loxP-flanked GFP-2A-neoR driven by HEF1-eIF4g for positive selection and HSV-tk driven by MC1 promoter for negative selection. The 5 -prime homology arm consisting of intron 13 (950 bp), the knockin insert consisting of exons 15–24 cDNA, and sv40 poly(A) signal sequence were in upstream of GFP-2A-neoR cassette. The 3-prime homology arm consisting of the In14 (950 bp) were downstream of the GFP-2A-neoR cassette. To test the rescue of CAPN3 expression in vivo, transplanted gene-corrected iPSC-derived myogenic progenitors into cardiotoxin-pre-injured tibialis anterior (TA) muscles of C3KO-NSG mice and rescue of the CAPN3 mRNA. 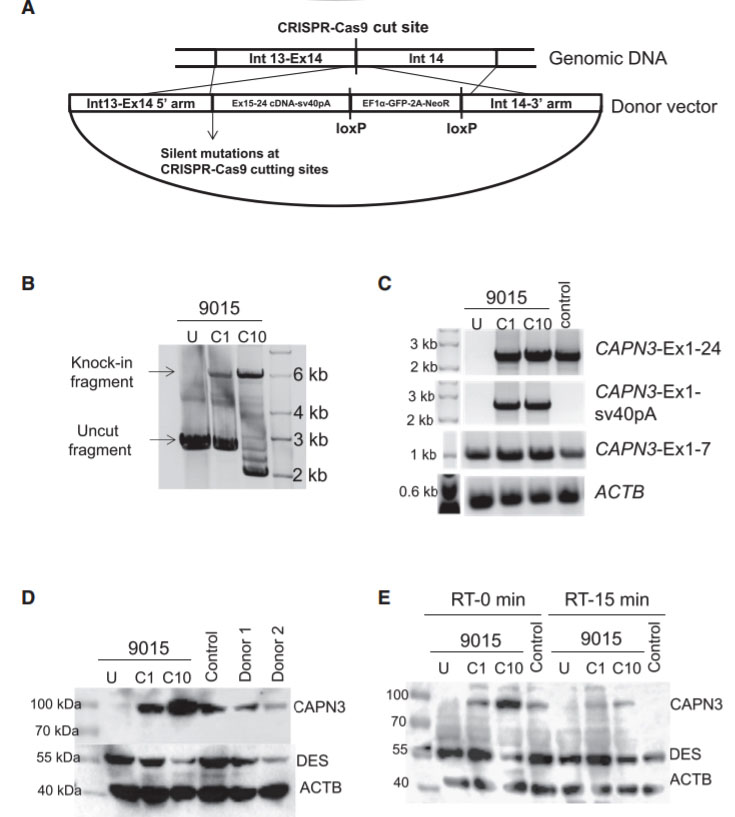 In this study, the researcher employed a homology-directed repair for gene knockin-based correction of CAPN3 mutations (A). LGMD2A iPSCs gene corrected (C1 and C10) spanning region amplified by genomic PCR. RT-PCR analysis were performed of gene-corrected and uncorrected 9015 iPSC-derived myotubes as well as of unaffected myotubes (control). Rescue of CAPN3 protein expression in gene-corrected (C1 and C10) LGMD2A iPSC-derived myotubes were performed with western blot. In the validation study, the patient’s parents and unrelated control iPSC-derived myotubes were used as reference (D). In addition, autocatalytic activity of CAPN3 were also analyses by western blot, the lysates obtained from myotubes incubated for 0 or 15 min at room temperature (E).

Ubigene focuses on the optimization of iPSC reprogramming, gene editing and differentiation, and has established a set of mature experimental procedures. With CRIPSR-UTMtechnology, gene editing in iPSC is much accessible. Check out our 100 cell lines that we had successfully modified!