What assays you need after stable cell line generation?

What assays you need after stable cell line generation?

As long as we construct gene editing cell lines (KO, KI, point mutation and stable expression), cell phenotype needs to be identified. However, there are so many ways to test cell phenotypes, which one is the best one to fullfill our research goal?


Most of the cell line related studies will perform cell assays of proliferation, cytotoxicity, cell cycle, cell migration, invasion and apoptosis. We may know the answer by understanding the principle and application of these assays!


Cell proliferation is the basis of growth, development, reproduction and heredity of cells. By comparing the growth curves of different groups, such as wild-type vs mutant, control vs overexpression, control vs knockdown and so on, we can identify whether there are significant differences in the proliferation status of the constructed cell lines, and then we can choose to detect the cell cycle or apoptosis. Figure 1 shows the effect of p62 overexpression on U87 and U251 proliferation.


There are many methods to detect cell proliferation, including CCK-8 detection and Trypan Blue Cell Counting. Cell counting is a necessary skill for researchers. CCK-8 detection method is based on the principle that succinate dehydrogenase in mitochondria of normal cells can reduce tetrazolium salts to purple crystalline substances. When these purple substances are deposited around the cells, cell proliferation status can be detected under 450nm OD (optical density) by microplate reader. Other methods, such as BrdU staining and Ki-67 detection, can reflect the spatial distribution of proliferating cells. However, these methods can only capture the proportion of proliferating cells at a single time point, so they are generally used to test cell proliferation in tissue sections. 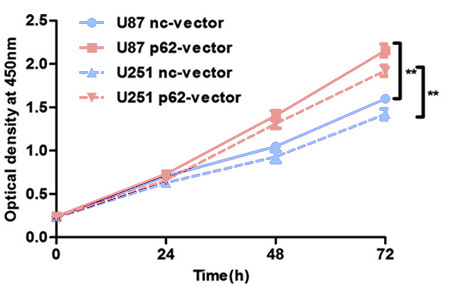 
Generally, regarding the changes of cell proliferation, by detecting the cell cycle, we can find out the reason of the changes. For example, the number of cells in S, G2 or M phase decreased, but most of them were arrested in G1 phase, which shows that G1/S checkpoint may be abnormal. This is of great significance for further understanding of biological growth and control of tumor growth. Propidium iodide (PI) staining flow cytometry is a simple and direct method to detect cell cycle.


Propidium iodide (PI) can emit fluorescence when combined with dsDNA, and the fluorescence intensity is proportional to the content of double-stranded DNA. Therefore, the DNA content of cells can be determined by flow cytometry. Because the DNA content of each phase of cell cycle is different, each phase of cell cycle can be divided into G1/G0 phase, S phase and G2/M phase according to the distribution of DNA content. The percentage of each phase corresponding to the flow cytometry histogram can be calculated by software (Fig. 2), and then the cell cycle can be analyzed. 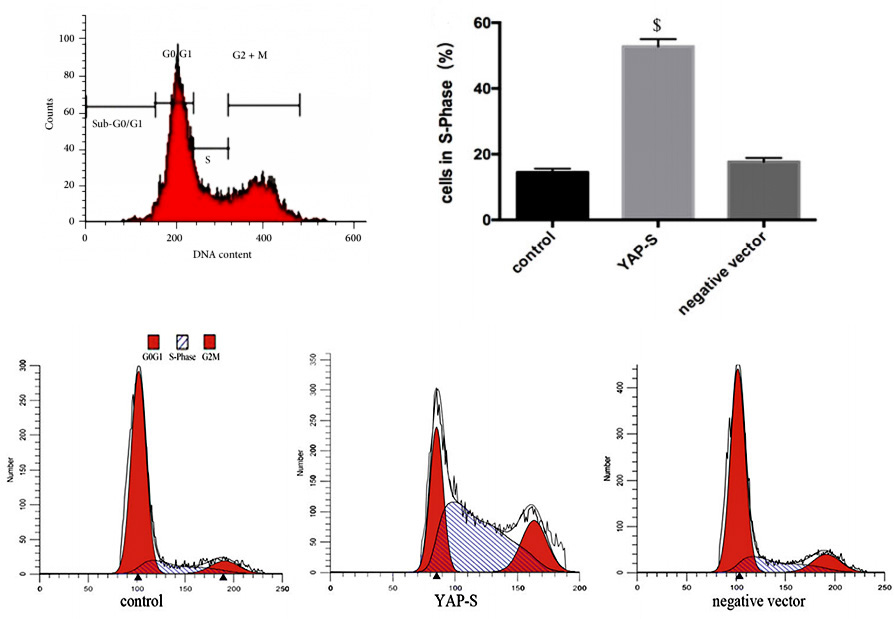 
Apoptosis is a process strictly controlled by multiple genes, such as Bcl-2 family, Caspase family, anti-cancer gene P53, etc. The disorder of apoptosis may be directly or indirectly related to many diseases, such as tumor and autoimmune diseases. Therefore, if you are studying tumor or degenerative disease, it is necessary to detect apoptosis, which is very important for the research.


As the process of apoptosis has typical morphological and molecular changes, detection methods are diverse, such as Annexin/PI staining protocol, TUNEL detection and Caspase 3 Activity Assay. In addition, Annexin/PI staining protocol is widely used, because it can distinguish early and late apoptosis and facilitate quantification. In the early stage of apoptosis, Phosphatidyl serine (PS) will flip from the inner side of the cell membrane to the surface of the cell membrane and be exposed to the extracellular environment. Annexin-V can specifically bind with PS. FITC, a green fluorescent molecule, can be linked to Annexin-V, and then can be used to mark the apoptotic body with intimal turnover. When apoptosis occurs, the permeability of cell membrane increases, PI can enter the cell, bind to DNA and emit fluorescence. Therefore, by analyzing the signal distribution of Annexin-V-FITC and PI, we can distinguish the early apoptotic (Annexin-V-FITC positive + PI negative) and late apoptotic (Annexin-V-FITC positive + PI positive) cells (Fig. 3). 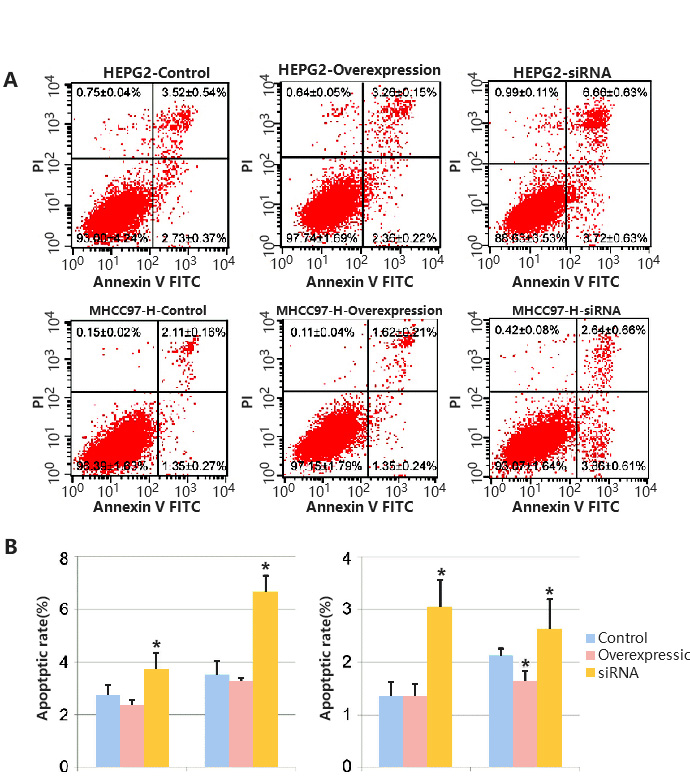 
In the study of cell-based disease models, you may want to identify potential therapeutic drugs through high-throughput screening of in-stock drugs on the basis of overexpression, knockdown or cell line KO of potential drug targets, or it is necessary to test the cytotoxicity of specific substances, such as drug screening. Then you can use cytotoxicity tests to screen for sensitive compounds, or to screen different cell lines for sensitivity to multiple concentrations of a compound. There are many methods to achieve cytotoxicity detection, among which CCK-8 and ATP detection methods based on cell metabolic activity indicate cell viability (Fig. 4), while LDH detection method based on metabolic enzyme leakage indicates cell damage (Fig. 5). Specific methods can be selected according to the research needs. 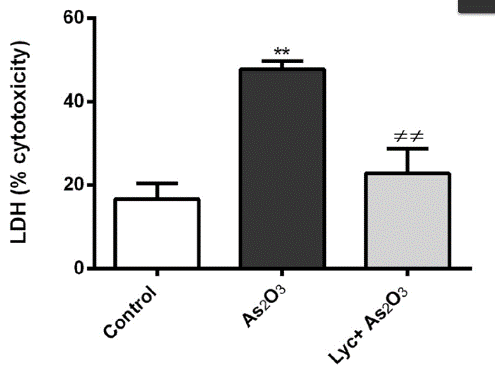 
It is generally believed that inhibiting tumor cell migration and cell invasion is an effective treatment in tumor therapy. Therefore, the detection of cell migration and cell invasion ability after the intervention of tumor cells (overexpression, knockdown, knockout, point mutation, screening assay) can be used as an effective indicator to evaluate the effect of intervention.


Transwell test is commonly used to detect cell migration and invasion (Fig. 6). Transwell test is also known as "perforation experiment". The chamber is placed in a 24-well plate with complete medium. And it contains dense pores, and the cell suspension is added into the chamber. Cells can deform through the holes in the chamber and migrate to a more nutritious chamber and stick to the outer side. Finally, the cells outside the original chamber were counted by staining, then we can evaluate the cell migration and invasion ability of the cells. However, there are still differences in the experimental methods for detecting cell migration and invasion. Invasion detection needs to lay a layer of matrix gel on the polycarbonate membrane to imitate the extracellular matrix.


In most cases, several assays need to be performed to bring out a conclusion of how the modification affects the cell phenotype. You may have some questions： How to do three or four assays at the same time? Is it necessary to go from cell proliferation test to cell migration / invasion test? How to deal with too many experimental groups?


What can you do, of course, is to find Ubigene! We provide gene-editing cell services, as well as related plasmids and cell-related assay services. Now we are having a combo of cell assays, you can get 3 professional test and analysis reports, you will no longer be annoyed by data analysis!  Click to learn more about our combo service