Human endometrial cancer (EC) is one of the malignant tumors of the female reproductive tract . With the increase of aging populations, obesity, and other metabolic diseases, as well as the delay of marriage and the increasing number of infertile patients, the incidence of EC is increasing and shows a younger trend. Early diagnosis and treatment can improve the prognosis of patients with EC and reduce their clinical mortality. However, for some early asymptomatic people, the diagnosis is in the late stage of EC and the etiology of EC has not been fully clarified. Therefore, it is still an urgent issue to elucidate the mechanisms contributing to EC occurrence.

RNPC1 was up or down regulated by overexpression lentivirus, knockdown lentivirus. All lentiviruses in this article were constructed by Ubigene (Guangzhou, China). Western blot, quantitative polymerase chain reaction and sphere forming analysis were performed to evaluate the stem-like traits of cells and RNPC1-induced effects on EC cell stemness. RNA immunoprecipitation (RIP) was constructed to investigate the underlying mechanisms. It was found that the spheres formed by EC cells, named EC spheres, exhibited a remarkably higher stemness than the parental cells, which is characterized as the increase of sphere forming ability, ALDH1 activity, stemness marker expression and migration ability. Notably, RNPC1 expression was decreased in poorly differentiated EC cells than that in EC cells with moderately differentiated. Additionally, RNPC1 expression was significantly decreased in EC spheres and RNPC1 overexpression attenuated the stemness of EC spheres. Moreover, RNPC1 overexpression decreased the migration ability of EC spheres.

Further study showed that RNPC1 was identified as the upstream regulator of MST1/2, indicateing a possibility that targeting RNPC1 might be a good strategy to activating the Hippo pathway during EC progression, which means RNPC1 could be a potential target for EC treatment.

In this study, Ubigene provided the RNPC1 overexpressed lentivirus, knockdown (shRNA) lentivirus and empty vector to study the mechanism of inhibition of EC cell stemness by RNPC1 and MST1/2 mRNA binding. Ubigene has a mature virus packaging system and hundreds of cell transfection experience. We provide high titer viruses for in vitro cell infection and in vivo use. Now it is only $599, visit us to learn more>>

RNPC1 directly bound to MST1/2 and enhanced their mRNA stability

The Hippo pathway, a tumor-suppressive signaling, the main members of this pathway are MST1/2 kinase, LATS1/2 kinase, and their junction proteins Sav and MOBI1 in mammals. The main function of the Hippo signaling pathway is to regulate the activity of transcriptional co-activators YAP and TAZ. When the Hippo signaling pathway is activated, MST1/2 kinase binds to and activates its ligand protein Sav. Then phosphorylated LATS1/2 kinase and MOB1 protein increase the formation of LATS/MOB1 complex and activate LATS1/2 kinase. Activated LATS1/2 kinase inactivates YAP and its byproduct TAZ. As the RNPC1 always binds to mRNAs and enhances their stability, the researchers wondered whether RNPC1 could activate the Hippo pathway. It was found that the expression of MST1/2 and LATS1/2 was decreased in EC spheres compared with EC cells (Figure 1A,1B). However, RNPC1 overexpression increased MST1/2 but not LAST1/2 mRNA levels in EC spheres (Figure 1C). Thus, we speculated that RNPC1 could directly bind to MST1/2 mRNA and thus activate the Hippo pathway. As expected, RIP analysis showed that MST1/2 was enriched in RNA pulled down by anti-RNPC1 but not the control IgG in EC spheres, but LATS1/2 was not enriched (Figure 1D). Additionally, MST1/2 mRNA stability was enhanced by RNPC1 overexpression in EC spheres (Figure 1E, 1F). 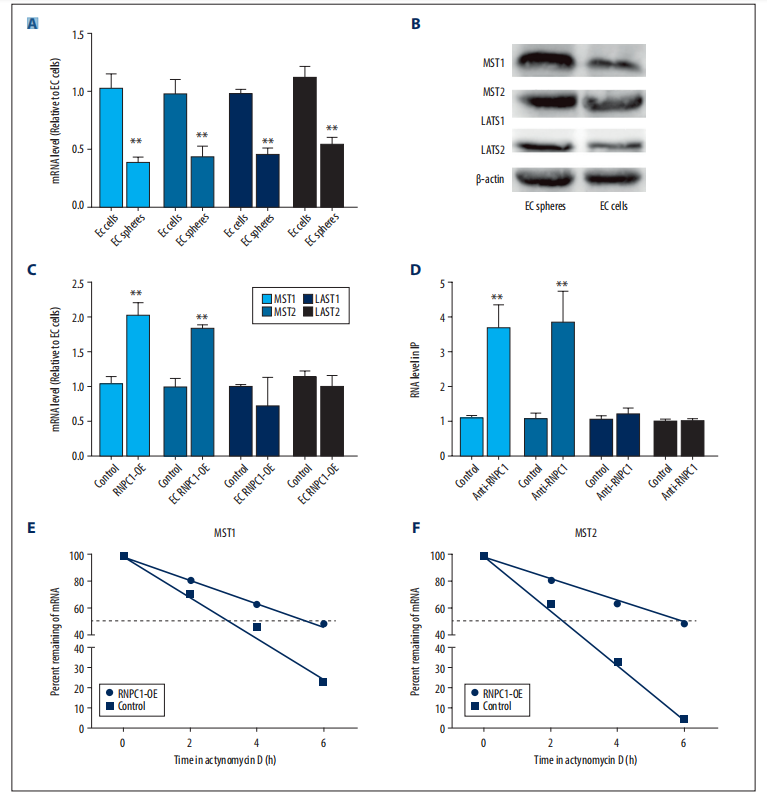 Finally, the researchers explored whether RNPC1 attenuated the stemness of EC spheres dependent on MST1/2. XMU-MP-1, an inhibitor of MST1/2, was added to EC spheres with RNPC1 overexpression. The expression of the downstream effectors of MST1/2, phosphorylated LATS1/2 (p-LATS1/2), was determined to evaluate the inhibitory efficiency of XMU-MP-1 (Figure 2A). The results showed that XMU-MP-1 partially reversed the decreased ALDH1 activity (Figure 2B), the reduced sphere forming ability (Figure 2C, 2D),reduction of stemness marker expression (Figure 2E, 2F), which were mediated by RNPC1 overexpression. These results suggest that RNPC1 attenuates the stemness of EC spheres through binding to MST1/2 and thus activating the Hippo pathway. 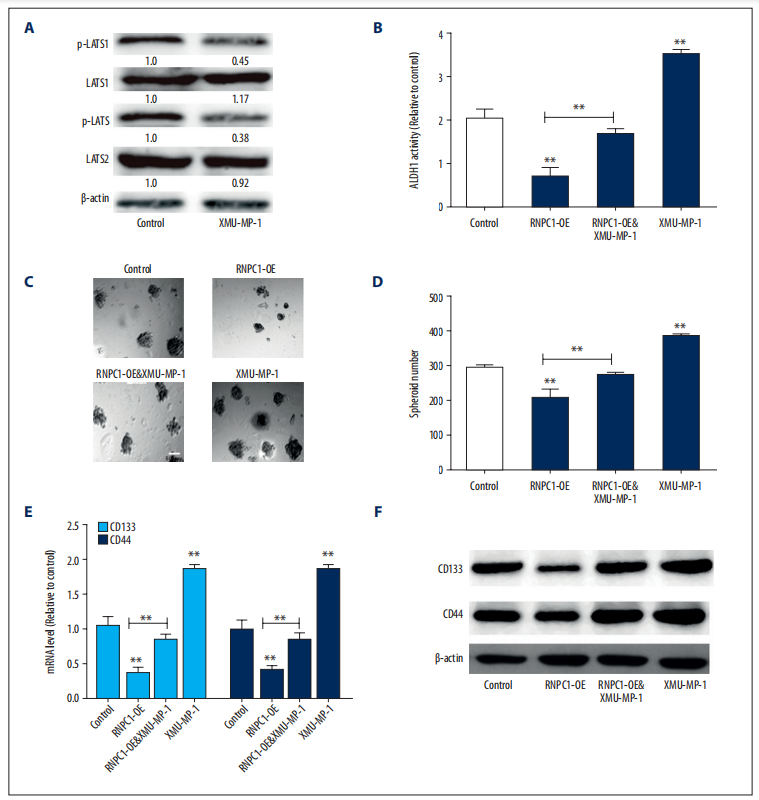 In this study, RNPC1 was identified as the upstream regulator of MST1/2. However, the detailed binding regions or sites were not elucidated in this study, and therefore should be investigated in future work. Although the main conclusion should be confirmed by further in vivo experiments, targeting RNPC1 might be a good strategy to activating the Hippo pathway during EC progression.

Ubigene is a company focusing on the field of cell gene-editing. We can provide high-quality services such as virus packaging and other related services of gene editing cell line stabilization, as well as nearly 2000 kinds of KO cells in-stock, Gene-knockout kits and other gene-editing related products worldwide. For more details, please contact us!