Bladder cancer (BLCA) is one of the most common cancers of the genitourinary system and the tenth most common cancer in the world. There are about 549,000 new cases and about 200,000 deaths every year. Among them, 75% of patients were diagnosed as non-muscle invasive bladder cancer (NMIBC) and the remaining 25% were muscle invasive bladder cancer (MIBC). The treatment methods of these two kinds of tumors are completely different. Therefore, it is important to accurately classify BLCA before determining the treatment strategy. Moreover, the choice of clinical treatment for BLCA also depends on the accurate determination of tumor stage. Inaccurate stage will introduce unnecessary surgical treatment and reduce the survival rate after treatment, and may also permanently reduce the quality of life of patients. However, the traditional non-invasive diagnosis method for BLCA has low sensitivity and specificity, which makes it difficult to detect early tumors, micro tumors, tumor residual foci and recurrent tumors, and to accurately distinguish between high-grade (HG) and low-grade (LG) tumors, MIBC and NMIBC.

Therefore, Wang et al. from Zhongnan Hospital of Wuhan University studied the comprehensive characterization of DNA methylation (DNAm) in BLCA. They found that DNA methylation is a specific marker of pan cancer, and the detection of special DNA methylation can be used for cancer diagnosis and accurate classification of subtypes. Therefore, the whole genome targeted sequencing of different tumor tissues and urine shows that the targeted sequencing of circulating tumor DNA methylation (ctDNAm) can help us accurately distinguish between HG tumors and LG tumors, MIBC and NMIBC, and is better than genome mutation and fluorescence in situ hybridization (FISH) in terms of recurrence prediction and prognosis prediction. An article entitled Non invasive diagnosis and survey of bladdercancer with driver and passenger DNA methodology in a prospective short study published in Clin Transl Med. Now let's go though the detailed research process. 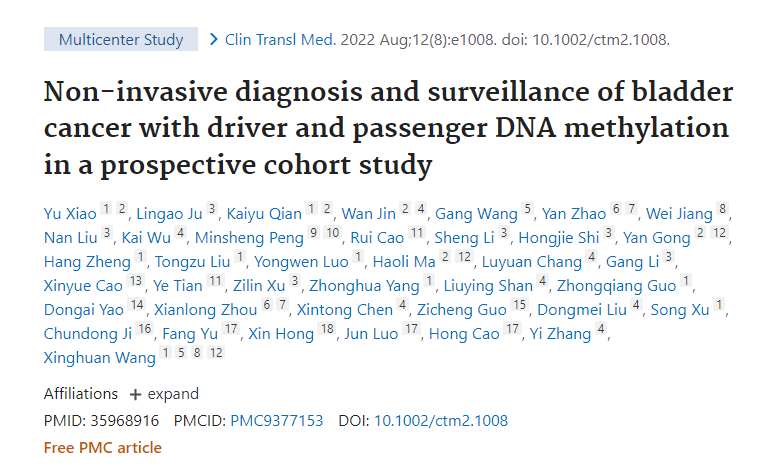 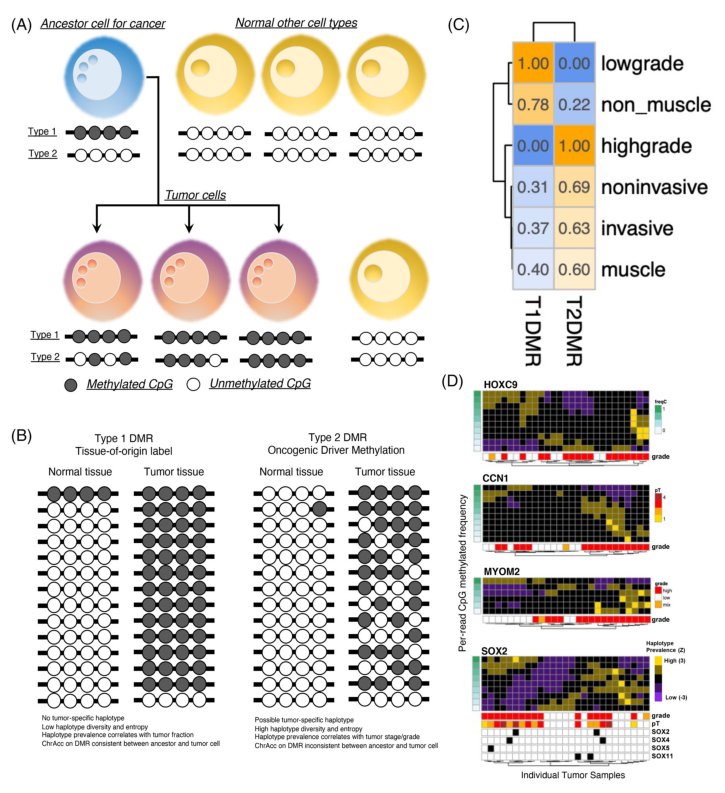 The above experiments confirmed that MIBC and NMIBC originated from the differentiation of different cells. The researchers verified the T2DMR function of SOX2 related driver genes in MIBC and NMIBC cells (i.e., urothelial basal cells and urothelial mesothelial cells).

The regulatory elements near SOX2 locus and their chromosomal accessibility were determined through ATAC database. CUT&Tag experiments were performed on BLCA cell lines T24 (from MIBC donors), 5637 (from MIBC donors) and RT4 (from NMIBC tumors) to study the binding of transcription factors and chromatin regulatory factors to SOX2 region. The result showed that the combination of FOXA1 unique to basal cells with the distal regulatory region (L1 or L4) would inhibit the non-enhancer dependent cis interaction of SOX2 and L4, activate the activity of L1 enhancer, and promote the interaction between L1 and SOX2 (Figure 2).

In this regard, researchers first used Cas9 lentivirus (provided by Ubigene) to construct 5637-Cas9, RT4-Cas9 and T24-Cas9 stable cell lines, and then transduced KO sgRNA lentivirus (provided by Ubigene) of DMR or SOX2 to knockout the SOX2 related T2DMR region and SOX2 site of the above TM4SF1‐positive cancer subpopulation (TPCS) cell lines to study the regulatory effect of T2DMR on SOX2 expression. The results showed that after SOX2-T2DMR was knocked out, SOX2 could not interact with L1 enhancer, resulting in the decrease of SOX2 RNA expression (Figure 2C). The direct knockout of SOX2 will weaken the migration and invasion ability of TPSC cell lines (Figure 3), and has a significant impact on the invasion of MIBC. These results all indicate that T2DMR is an important regulatory element of SOX2 in BLCA, and its differential methylation will drive the transformation of cancer from NMIBC to MIBC, suggesting that the differential methylation of T2DMR may be the basis for the classification of MIBC and NMIBC. 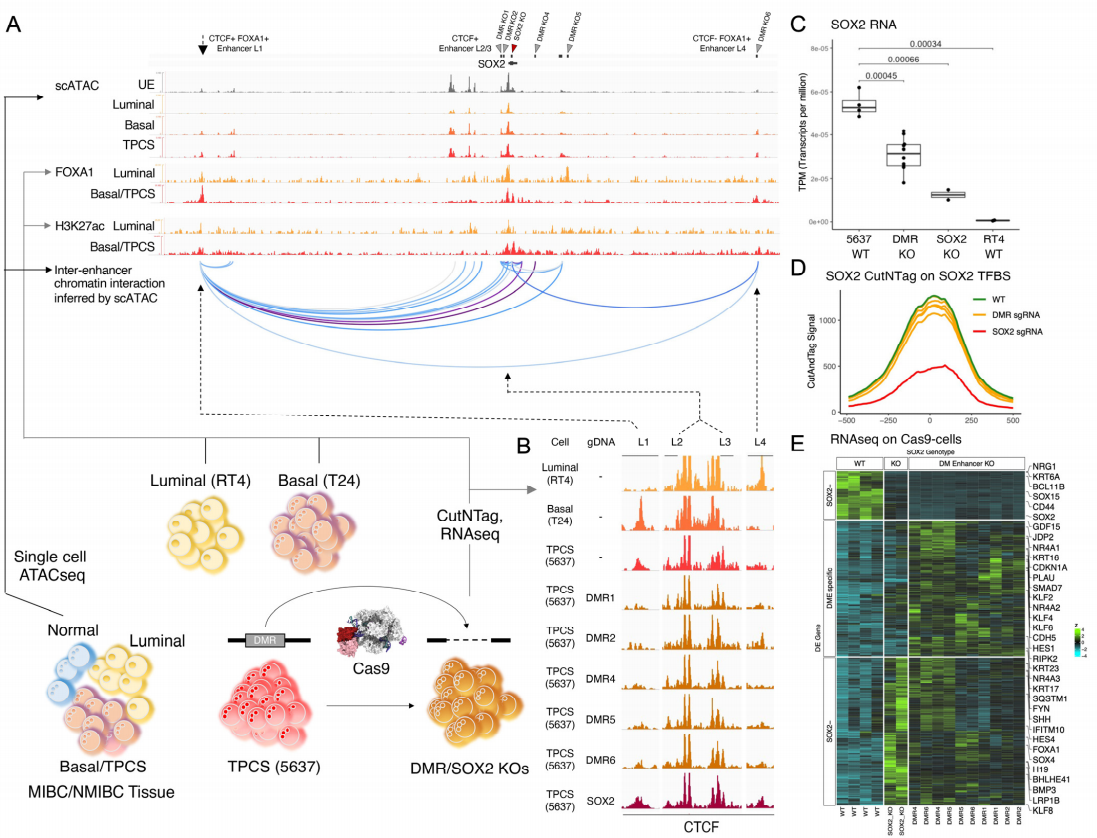 10,000+ highly efficient gRNA plasmids are available in stock as low as $20, easily achieve KO and KI. Click to explore our in-stock plasmids>>

MIBC and NMIBC tissues were sequenced by EUCAS, and T1DMR and T2DMR DNAm haplotype heat maps were drawn according to the prevalence (Figure 4A). The heat map shows that the prevalence of DMR haplotype can clearly classify BLCA samples into HG/LG. In the HG group, there are not only oncogene mutations but also tumor suppressor gene mutations (TP53, CDKN, SOX), while in the LG group, there are only oncogene mutations (Figure 4A). It was found that the DNA methylation detection of T1DMR and T2DMR could accurately reflect the potential pathological and clinical characteristics of tumor biology and be used for accurate classification of MIBC and NMIBC by building models for prediction (Figure 4B). 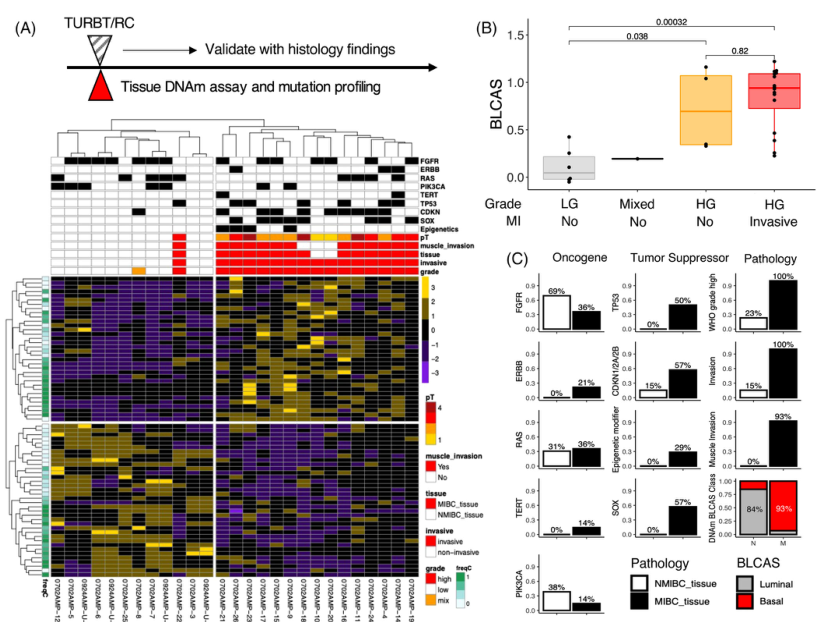 Ubigene provides TP53, CDKN, SOX knockout cell lines to facilitate cancer target validation. More than 3000 KOs are available in stock, deliver in one week, saving your time in the construction process and speeding up your research! Only $1780, get high-quality full-allele KO clones. Visit us to explore your ideal KO>>

Subsequently, the author tested whether cancer related methylation characteristics can be recognized in urine, and found that the tumor load was positively correlated with the DNAm signal in urine. Therefore, the author developed a non-invasive BLCA diagnosis method - to predict the tumor by multiple PCR NGS sequencing of the DNAm haplotypes in urine samples (UCAS). The authors compared this method with the traditional BLCA non-invasive detection method, and found that this new method has higher sensitivity and specificity, and is superior to the existing clinical diagnosis methods.