The most comprehensive introduction of HEK293 collections -- Ubigene

The most comprehensive introduction of HEK293 collections -- Ubigene

Introduction of HEK293 and its derived strains

So far, according to different research and production needs, many subtypes and derived cell lines of HEK293 cells have been established (Figure 1). In this chapter, 293T, 293H, 293F and 293S are mainly introduced. 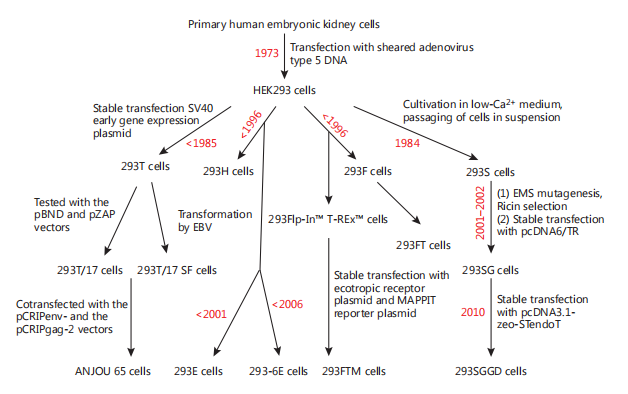 HEK293 cell line stably transfected with SV40 largeT antigen and derived as 293T cell line. 293T cell line is as easy to be transfected as HEK293. The efficiency of transfection with calcium phosphate, PEI or liposome can reach more than 90% [1]. The SV40 largeT antigen can achieve the amplification of foreign expression vector, and finally increase the expression amount of target gene. In addition to gene expression and protein production, 293T cells are often used for packaging lentivirus, retrovirus and adenovirus.

This cell line is also derived from HEK293 cell line, which can grow rapidly in serum-free culture system with high transfection efficiency and high protein expression performance. This cell line is different from HEK293 and 293T cell lines. It firmly attaches to the plate and can be used not only for plaque detection, but also for production of recombinant proteins. For example, the recombinant protein VIIIFc fusion protein (rfviifc), a long-acting coagulation factor approved for the treatment of Hemophilia A, is currently in short supply on a regular basis and in violation of production quality, indicating that it is still difficult to manufacture rFVIII. rFVIII is a large and multi-domain glycoprotein with significant post-translational modification. Therefore, a key point for McCue, Justin et al. [2] in optimizing the production process of rfviifc is to use a human cell line without adding any ingredients from humans or animals. This shows that 293H cell line has biochemical characteristics conducive to the expression of recombinant protein, such as easy transfection, efficient human protein translation processing and production.

293F cell line is a wild type 293 cell line that can grow rapidly in serum-free culture system, and can express protein efficiently. F refers to Fast-growth. 293F transfected with pCMVSPORT6TAg.Neo plasmid and derived to 293FT. It is usually used in the production of lentivirus. 293FTM cell line were obtained from Flp-InTM T-RExTM 293 cell line by introducing the ecotropic reporter plasmid and the MAPPIT (mammalian protein-protein interaction trap) reporter plasmid, and this cell line is commonly used for protein interaction screening.

Application of 293 and 293T cell lines in gene editing

According to the above introduction, you can see that 293 and 293T cells have many basic applications in gene editing. Here we have found some cases of 293 gene editing.

1. Bekier, Michael E. et al. [3] used CRISPR/Cas9 technology to knockout two types of Golgi stacking proteins GRASP55, GRASP65 in HeLa and HEK293 cell lines. The characterization of these cell lines showed that the single knockout of GRASP55 or GRASP65 damaged the accumulation of Golgi cisternae, while the double knockout of the two GRASP proteins would decompose the entire Golgi apparatus structure. The decomposition of Golgi apparatus not only accelerates protein transport, but also impairs the accurate glycosylation of proteins and lipids on the cell surface. These KO cell lines provide useful tools for studying the mechanism and biological significance of Golgi structure formation, and may be used to study the pathology of Golgi defects, such as Alzheimer's disease, congenital glycosylation disorder, foot and mouth disease, reoxygenation injury, and a variety of cancers.

A, B) Sphere formation in 293T cells seeded in self renewal promoting suspension culture conditions. Passage of 293T spheres gives rise to higher proportion of secondary spheres. C) Flow cytometric analysis of expression of CD24 and CD44 in 293T cells. Cells were cultured under adherent (2D) or tumor-initiating cells enrichment condition (3D). There is an increase of CD44+/CD24- population in cells cultured in 3D vs. 2D culture conditions. D) Flow cytometric analysis of ALDH activity showed that the 3D culture condition enriches for ALDH-positive cells compared to the 2D culture of 293T cells.

HEK293 and 293T cells are the two most commonly used cell lines in the 293 family. Because they have many similarities in gene and phenotype, people often get entangled when choose them for research. So how to choose the best one for your subsequent experiments?

By analyzing the genome sequencing result of the offspring cell lines derived from HEK293, it was found that compared with the parent HEK293, these cell lines’ chromosomes were more unstable, and the copy number increased or lost at multiple locations in the genome. According to the actual cases of Ubigene, 293T is prone to have compound heterozygote during gene editing, which is difficult to validate the exact genotype. Therefore, we believe that HEK293 cell line is more suitable for gene editing experiments such as KO, KI or point mutation. In 293T cell line, due to the transfection of the SV40T antigen, the plasmid containing SV40ori could be significantly amplified in the cell line, thus promoting gene expression. In addition, after transfected with SV40 large T antigen, the cell proliferation was significantly improved compared with HEK293, so 293T cell line is more suitable for plasmid transfection, virus packaging and other expressing experiments.

In a word, the 293 series of cell lines have been transformed and optimized for a long time, and have been widely used in many fields. Ubigene has rich experience in gene editing and cell modeling for 293 and 293T , and has 1000+ in-stock KO HEK293 cell lines, covering more than 20 signal pathways, 11 drug targets and most cancer genes. As low as $1780, get a homozygous KO clone in one week, speed up your experimental research. Click here to explore our KO cell bank>>