How to utilize CRISPR in drug discover (Part 1)--GPCR

How to utilize CRISPR in drug discover (Part 1)--GPCR

Strong light makes people close their eyes, the fragrance of flowers makes people pleasured, delicious food makes people appetized, and darkness makes people's hearts beat faster... On the surface of cells, there are a large number of G-protein-coupled receptors (GPCR) that can sense external signals, and they are involved in regulating all aspects of activities in our bodies.

GPCRs, also known as seven-(pass)-transmembrane domain receptors, have a very conservative structure. Its N terminus is located outside the cell membrane, and its C terminus is located inside the cell (Figure 1). Ligands combine with the "pockets" composed of transmembrane helixes to transfer signals to cells through the change of transmembrane conformation. The nature of the ligand determines the state of GPCR. The activated ligand (agonist) activates the receptor, and the receptor further couples with the G protein heterotrimer to transduce the ligand signal into the cell; The inhibitory ligand (inhibitor/antagonist) inhibits the function of the activated receptor. 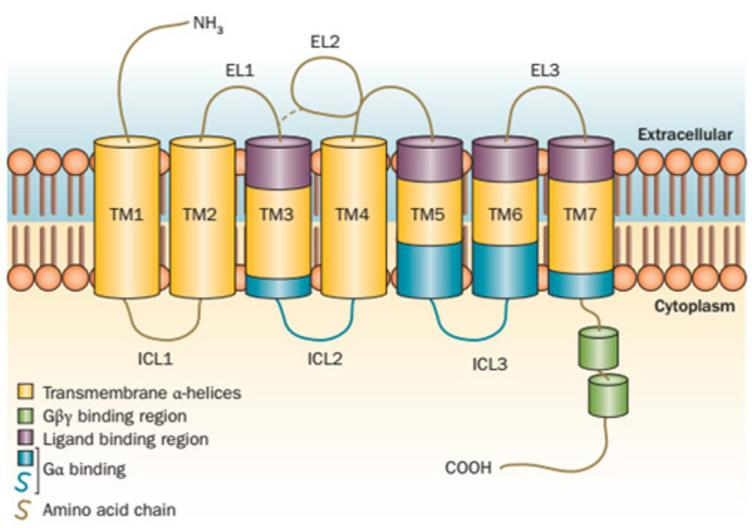 There are more than 800 GPCR family members in the human body. GPCR family is one of the most important drug targets nowadays. Cancer, diabetes, heart disease, immune and infectious diseases, neurological and mental diseases, etc., are related to GPCR. At present, about 1/3 of the drugs approved by FDA are targeting GPCR, but only about 100 GPCR genes are covered. Apart from the other half of the GPCR genes responsible for olfaction, there are still about 300 potential targets in GPCR family. It is possible to develop better drugs in the future through in-depth study and screening of these GPCRs. In 2017, an article on GPCR drug research and development was published in Nature. It mentioned that there are average of 10.3 drugs targeting each well-studied GPCR drug target, which means it is necessary to discover new target genes in the development of new GPCR-related drugs. It is also mentioned that one of the key problems to be solved in the future R&D of GPCR drugs is the need to improve the disease models and use gene editing systems such as CRISPR/Cas9[1] to carry out drug target validation. So what is the relationship between CRISPR/Cas9 and the R&D of GPCR drug targets? In this article, we will introduce some relevant cases to sort it out.

Prostate cancer is one of the most common cancers and the second leading cause of cancer-related deaths among American men. Androgen deprivation therapy (ADT) is the initial treatment for this disease, but the disease usually develops into castration-resistant prostate cancer (CRPC), which is more clinically invasive. Therefore, it is necessary to further understand the molecular pathogenesis of CRPC and identify new targets to design new treatments for prostate cancer. GPRC6A is related to the pathogenesis of prostate cancer, but its role is still unclarified. The researchers used CRISPR/Cas9 technology to create GPRC6A deficient PC-3 cell line, and compared the changes in cell proliferation and migration with wild-type PC-3 at the basic level and under ligand stimulation. The results show that GPRC6A knockout PC-3 cells can significantly inhibit the activation of osteocalcin in ERK, AKT, and mTOR signal pathways, and inhibit cell proliferation and migration in vitro. In vivo xenotransplantation model, compared with wild-type PC-3 cells, GPRC6A knockout cells had significantly reduced tumor growth, indicating that they were resistant to the growth of prostate cancer induced by osteocalcin. The research results support the role of GPRC6A in prostate cancer and suggest a potential therapeutic target to inhibit prostate cancer [2].

The exclusive KO cell bank of Ubigene provides in-stock KO cell lines of 25 signal pathways, such as ERK, AKT and mOTR, covering thousands of genes, as low as $1780, and homozygous KO clones are delivered in 1 week! Click here to explore your target genes>>

After the intake of nutrients, L cells and K cells in the intestine secrete Glucagon-like peptide-1 (GLP-1) and Glucose-dependent insulinotropic polypeptide (GIP), respectively. These incretins can stimulate insulin secretion by increasing the glucose of pancreatic βcells (GSIS) to reduce the blood glucose level. This has established the receptors GLP-1R and GIPR as important drug targets for diabetes treatment. Research shows that the combined use of GLP-1 and GIP can produce beneficial effects. However, due to the overlap of downstream signal pathways of the two receptors, it is necessary to determine the activity of dual agonists on each receptor when developing potential therapies. The researchers successfully obtained GIPR-KO and GLP1R-KO clones by targeting the GIP receptor (GIPR) and GLP-1 receptor (GLP1R) respectively with CRISPR/Cas9 technology in the INS-1 pancreatic β cell line. The obtained cell lines were used to test the activity of different dual agonists. Dual agonist A has been found to be quite effective in wild-type INS-1 cells and GIPR-KO cells, but its efficacy in GLP1R-KO cells is 20 times lower, indicating that GLP-1 contributes more to dual agonist A, while dual agonist B results showed that GIP contributes more. Balanced dual agonist C participates in GLP-1R and GIPR in vitro and in vivo. This is the first time that CRISPR/Cas9 technology has been used to detect the activity of GLP-1R/GIPR dual agonists in vivo. In addition, this technology can also be used to study many other co-expressed targets in βcells and other related cell lines [3]. 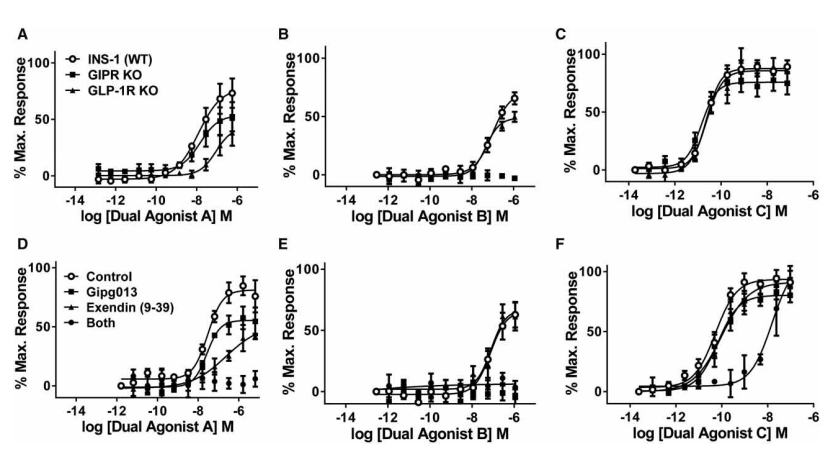 Figure 3. Tests of GIPR or GLP-1R components in dual agonists

βAdrenergic Receptor (βAR) is a G-protein-coupled receptor, which is critical to the physiological response of hormone/neurotransmitter adrenaline and norepinephrine found in the nervous system and the whole body. It is the target of many widely used drugs, among which βAR and β2AR are the most widely studied, and their ligands are used for the treatment of asthma and cardiovascular diseases. βARs send signals through Gαs G protein and by activating adenylate cyclase and cAMP-dependent protein kinase. In order to supplement pharmacological evidence for the role of β2AR in the Ca2+ release process, researchers have studied it at the genetic level. Create HEK293 cells with ADRB2 gene deletion through CRISPR/Cas9 system, transfect the knockout lines with control vectors or HA-β2AR expressing constructs, and test their Ca2+ response to ISO. The results show that in the absence of β2AR, no Ca2+ response to ISO can be detected in cells, and only very weak non-specific response can be observed at much higher concentrations. Transfected with the β2AR expression plasmid can rescue this situation [4].

There are many cases in which CRISPR/Cas9 technology has been applied to GPCR research, such as negative screening of genes promoting viral infection through the sgRNA knockout library of GPCR, and labeling of interested GPCR genes through CRISPR/Cas9 technology. Horioka et al. [5] knocked LgBiT (an 18 kDa protein), a fragment of NLuc, into the N-terminal of CXCR4 gene in HEK293 cells, and at the same time knocked SmBiT (an 11 amino acid residue peptide), another segment of NLuc, into the C-terminal of β- arrestin2. When these two proteins are close, fluorescence can be emitted, which is used to screen agonist ligands of CXCR4.

GPCR family still has many “secrets” that have not been explored. It has great potential in drug research and development and is expected to provide hope for the treatments of major diseases. With the development of CRISPR/Cas9 technology, we can use this method to generate cell models to study GPCR, validate and screen drug targets, and accelerate the development of GPCR-targeting drugs.

There are more than 100 kinds of GPCR-KO cell lines in Ubigene’s KO cell bank, visit us to find out the list >>

In addition, Ubigene provides customized KO service as fast as 4 weeks, GPCR expression stable cell line construction service as low as $2020, which brings you an extremely fast and high-quality construction experience and assists in high-throughput screening of drug targets! Click and contact us to learn more about the services>>