CRISPR/Cas9 facilitate to discover of inhibitors of KRAS, the difficult-to-target gene in cancer

CRISPR/Cas9 facilitate to discover of inhibitors of KRAS,
the difficult-to-target gene in cancer

KRAS mutation often occurs in various types of tumors. About 30% of cancer patients have KRAS gene mutations in their genomes, including 90% of pancreatic cancer, 50% of colon cancer and 25% of lung cancer. 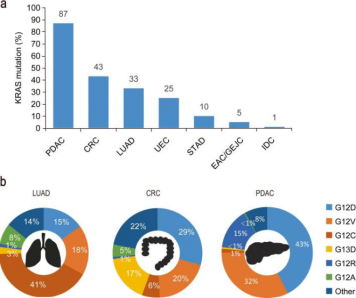 However, KRAS lacks classical drug binding sites, and the binding of activated KRAS protein with GTP has picomolar affinity. Small molecule drugs need stronger binding power than traditional blockers to compete, so discovering a drug that targets KRAS mutants is a great challenge.

So far, scientists have made a lot of efforts for KRAS. With the approval of the FDA for listing of Amgen's KRAS G12C inhibitor (AMG-510), the "curse" that KRAS cannot be targeted has ended, and the prelude to the development of KRAS inhibitors has been opened. Finding new cancer treatment targets had become a trendy topic. Of course, it is difficult to design inhibitors directly targeting KRAS, so many scientists focus on targeting upstream regulators or downstream effectors of KRAS.

As mentioned above, it is very difficult to directly target KRAS with drugs. Therefore, researchers have been trying to find relevant indirect ways in the past 40 years, and have explored several research ideas with high feasibility, including reducing the expression of KRAS, interrupting the membrane localization of KRAS, interfering with the interaction between KRAS and its effectors, inhibiting upstream and downstream signals, synthetic lethality method, etc. Here is a brief introduction to the common ideas of KRAS-targeted drug development:

To design inhibitors with good specificity for KRAS mutations, so as to reduce the expression of KRAS mutants and inhibit the canceration caused by continuously activated KRAS mutants.

The normal activation of KRAS requires the involvement of SOS protein. Therefore, another design idea of drugs is to design targeted inhibitors for KRAS-SOS binding region. 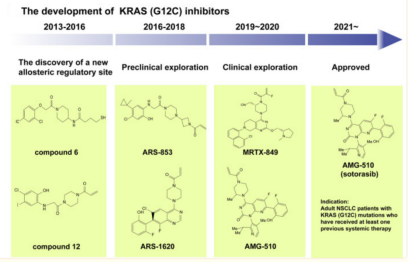 Based on the breakthrough of the "indirect approach", in recent years, there have been several good news of KRAS inhibitors discovery-- AMG-510, the approved treatment for patients of non-small cell lung cancer (NSCLC) with KRAS G12C mutation, who have received at least one systematic treatment; Mirati Therapeutics has two KRAS inhibitors and their efficacy has been verified in clinical and cancer models respectively; Revolution Medicines also has a KRAS inhibitor that shows good anti-cancer activity in cancer models. Therefore, researchers' enthusiasm for KRAS research has also continued to rise.

Cell line model is the most commonly used tool in human disease research. It can be used in target validation, target discovery, drug screening, etc., which is helpful to comprehensively understand the nature of disease, and provides an effective means for human to defeat malignant tumors and carry out more in-depth research. Here are some application cases of KRAS point mutation cells in target research.

（1）Effect of KRASG12C mutation on translation mechanism mediated by different signal pathwaysThe EGFR (15-50%) or KRAS (20-30%) oncogenic mutations detected in lung cancer can activate MAPK and/or PI3K/AKT/mTOR signaling pathways, which target translation initiation factors of important genes. KRAS mainly causes abnormal signal transduction even without extracellular stimulation through mutations at G12, G13 and Q61 loci. KRASG12C is one of the most common carcinogenic mutations in lung adenocarcinoma and a promising therapeutic target of small molecule inhibitors. KRAS oncogenic signal pathway is responsible for regulating tumor microenvironment, and translation factor is one of the most significant down-regulation targets. It has been reported that the analysis of EGFR wild-type CL1-5 and A549 cells integrated with inducible KRASG12C expression system showed that the cap dependent translation function of mTORC2 and NF-κB in CL1-5 cells was impaired. A549 cells containing KRASG12C mutation can promote cap dependent translation by recruiting mTORC1, c-MYC and eIF4F complexes [2]. After prolonging the induction of KRASG12C in a mTORC1/p70s6k independent manner, the translation rate of CL1-5 cells was restored. The results show that KRASG12C signal affects the regulation of translation mechanism to some extent. The construction and research results of these point mutation cell lines can provide more references for the molecular mechanism of KRAS gene mutation and downstream phenotypic events, and provide new ideas for the development of specific targeted drugs for KRAS.

The invention of KRASG12C covalent inhibitor is an important milestone in the treatment of RAS mutation cancer, so it is significant for the treatment of non-small cell cancer (NSCLC). Vaclova et al. studied whether there are other KRAS mutations co-occurring with G12C mutation in NSCLC, and whether this co-mutation will affect the sensitivity of cells to G12C specific inhibitor (AZ'8037). After analyzing the data of SELECT-1 phase 3 study (NCT01933932), they found that the mutation that often occurs with G12C mutation (c.34G>T) in NSCLC is c.35G>T, and this co-mutation has two cases: cis and trans. The cis mutation will produce G12F mutant KRAS protein, and the trans mutation will produce G12C and G12V mutant KRAS protein. 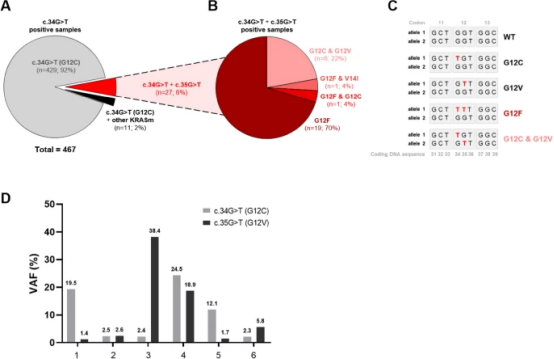 Figure 4. Analysis of the co-occurrence of KRAS G12C (c.34G>T) and other KRAS mutations in NSCLC patients

Then, to verify whether the co-mutation will affect the effectiveness of G12C specific inhibitors, Vaclova et al. used CRISPR/Cas9 technology to introduce c.35G>T mutation, they constructed KRASG12C-G12V double mutation and KRASG12F point mutation NCI-H358 cells, and studied the sensitivity of these two cells to G12C specific inhibitors. The results showed that, compared with KRAS G12C cell line, the sensitivity of the two kinds of cells with co-mutation to the G12C specific inhibitor AZ'8037 was significantly reduced.This study suggests that the frequency of KRAS double mutation should be paid attention, and multi region tumor sequencing should be carried out to avoid missing KRAS subclone mutants. There is still a long way to go in the development of KRAS inhibitors.

Figure 5. The effect of AZ'8037 on the activity of KRAS mutant cell model and Western blot analysis

Although decades of studies have emphasized that KRAS mutation is the core factor of tumorigenesis and clinical drug resistance, no effective treatment for KRAS mutation has been found, so it is urgent to study KRAS mutation. The popular kinase genes that are also related to cancer and are easy to mutate include EGFR, BRAF, PIK3CA, MET, NRAS, etc. At present, many researchers have chosen to build point mutation cell models for reducing gene mutation disease models to screen and verify new drug targets.

3000+ KO cells in stock>>cover most studied genes of signal pathway mentioned in this article, which is a powerful tool for the research of therapeutic targets for mutation diseases. Deliver in 1 week, only $1780!