DNA mismatch repair (MMR) is a repair system after genome replication, which plays an important role in improving DNA replication fidelity, reducing gene mutation and maintaining genome stability. Mutations of MMR related genes in human cells can inactivate the MMR system, increase the mutation rate of cells by more than 100 times, and are associated with Lynch syndrome, hereditary nonpolyposis colorectal cancer (HNPCC) and some sporadic cancers. Therefore, it is of great significance to further explore the molecular mechanism of MMR system, which can provide a foundation for the prevention and treatment of related diseases. 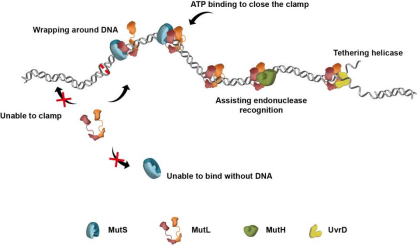 In E.coli's MMR system, after MutS recognizes the mismatch, it will recruit MutL to form a complex, and then MutL will mediate the activation of downstream proteins to repair the mismatch (Figure 1). From the recognition of mismatch to the splicing of specific locus, the process of signal transmission needs to be efficient and specific. 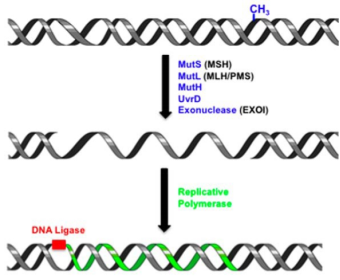 At present, there are four models for mismatch repair initiation(Figure 2), which all believe that the mismatch signal is transmitted by MutS-MutL complex. Besides the sliding model, the other three models all considered that the interaction between MutL and DNA has an important function in the process of signal transmission.

However, the previous work of Jiaquan Liu’s team from the Center for Excellence in Molecular Cell Science, CAS, found that MutL will undergo conformational changes after ATP binding, forming MutL slicing clamps on DNA and spreading rapidly (Figure 3). The formation of MutL sliding clamp is the premise of signal transmission. However, there seems to be no continuous interaction between MutL sliding clamp and DNA.

According to the literature, MutL interacts with DNA through a positively charged cleft (PCC) in the N-terminal domain. Moreover, PCC mutation will lead to a decrease of MMR system efficiency and an increase in cell mutation rate. In order to explore the functions of key molecules and PCC in the process of MMR signal transmission, by using single molecule fluorescence imaging technology and in vitro reconstruction of MMR system, Jiaquan Liu's team, together with Richard Fishel's team from Ohio State University, published a paper entitled "MutS functions as a clamp loader by positioning MutL on the DNA during mismatch repair" in Nature Communications. This research result proves that MutS uses MutL PCC to promote the formation of MutL sliding clamp on DNA, so as to transmit mismatch signals. 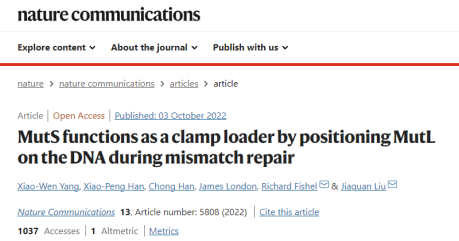 By sequence comparison, the researchers found the conserved amino acid sequences in PCC and mutated them. The result showed that PCC mutation would weaken the ability of MutL to bind DNA (Figure 4).

In order to further explore whether the decreased ability of MutL to bind DNA would lead to the inactivation of the MMR system, E.coli's MutL gene knockout strain (provided by Ubigene) was used to carry out in vivo complementation experiment. They found that the mutation rate of knockout strains could not be restored to the normal level by supplementing the mutated gene of MutL PCC, which indicated that PCC mutation would lead to the inactivation of MMR system. At the same time, the results of single molecule imaging show that the reason why PCC mutation causes the deactivation of MMR system is that MutL mutant cannot form a complex with MutS (Figure 5).

The CRISPR-B™ system developed by Ubigene combines the Red/ET recombination system with CRISPR/Cas9 gene editing system, and makes use of the advantages of CRISPR/Cas9 system in efficient DNA cutting and the further optimization of gene-editing vector and gene-editing process, which greatly improves the efficiency of bacterial gene editing, and can easily achieve the scarless gene knockout and knockin of strains. Escherichia coli, Salmonella, and Pseudomonas aeruginosa are all feasible. Positive clones are delivered as soon as 3 weeks. Click to get more details>>

In the past, people believed that MutS would transmit mismatch signals in the form of the complex after recruiting MutL. However, the researchers found that the formation of MutL sliding clamp can be independent of MutS, and can activate downstream pathways. Therefore, the function of MutS in MMR is only to load MutL onto DNA as a mismatch specific clamp loader. Once MutL slipping clamp is formed, MutS is no longer required to participate in the repair process downstream of MMR. 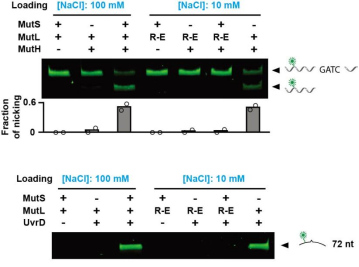 This study proves that MutL sliding clamp is the key molecule of MMR signal transmission, but MutS is just a mismatch specific clamp loader, which also explains the function of MutL PCC, providing new insight into the signal transmission mechanism of DNA mismatch repair.