Modern biology takes protein as the basis of all cells and organisms, which is the main undertaker of life activities. However, if you want to make life activities regularly, you must let proteins "work" at the right time and "rest" in time after work. Therefore, protein kinases and phosphatases control the activation and inactivation of proteins and are indispensable in all biological reactions. Therefore, regulating the expression of protein kinase can often interfere with certain life activities more effectively than controlling the downstream functional proteins.

At first, it was very difficult for researchers to study protein kinase. Most scientists generally need to confirm that a certain protein plays a decisive role in a life activity before further testing to validate it is a protein kinase. Taking the famous oncogene Src as an example, when people first found Rous sarcoma virus could induce chicken cells to become tumor cells by integrated the gene into the cell genome, and promoted the proliferation through src gene. After the discovery that Src is an oncogene, people further determined that the protein product it encodes is a protein kinase.

With the development of DNA sequencing technology in the 1980s, various protein kinase characteristic sequences were analyzed, which greatly accelerated the study of protein kinase. Now it is the genomic era, and we have complete kinase information of organisms. We can screen out potential phosphorylation targets by their phosphorylation sites. This has provided great help for us to study the mechanism of life process, the development of cancer, and the exploration of various signaling pathways. [1] It has been 21 years since Imatinib, the first inhibitor of protein kinase, was approved by FDA for marketing. At present, there are nearly 100 drugs related to kinase approved by FDA, and more kinase related drugs are being developed and clinically tested. The advent of kinase related drugs has provided powerful weapons for fighting immune system diseases and malignant tumors. Many researchers are also enthusiastic about the study of protein kinase. At present, the main approaches to study protein kinase can be summarized as follows:

Discover the target protein kinase: As a molecular switch, protein kinase plays an important role in most life activities, and often plays a role in the whole signal transduction. Therefore, some protein kinases with significant differences can be preferentially selected as intervention targets in the histological results obtained through meta-analysis or NGS sequencing.

In vivo experiment: When studying the effect of protein kinase in diseases, we can first select a suitable cell line for in vitro experiment. Base on the result of the in vitro experiment, the reliability of the conclusion can be further verified in vivo. We can use viruses to interfere with targets by constructing AAV of cas9-gRNA; The experiment can also be carried out by building a CKO or KO animal model.

1、Study on the formation mechanism of apoptotic vesicles

At present, most small molecule inhibitors have the limitation of non-specific targeting. Take GSK-269962 as an example, while inhibiting ROCK1 (IC50 is 1.6 nM), it also has a partial inhibition effect on ROCK2 (IC50 is 4 nM). In addition, the known GSK-269962 inhibition targets include RSK1, MSK1, AKT1, AKT2, and AKT3. This undoubtedly caused great difficulty to the mechanism exploration.

At the same time, the team also constructed PAK2-/- and LIMK-/- cell lines, and also observed the formation of apoptotic vesicles. The results showed that, unlike knockout of ROCK1, knockout of PAK and LIMK did not prevent cell apoptosis, which was caused by cell membrane blistering. In a word, this study shows that ROCK1 is a necessary regulator of the formation of apoptotic membrane vesicles by means of inhibitors and gene editing, while PAK and LIMK are not necessary protein kinases in this process. 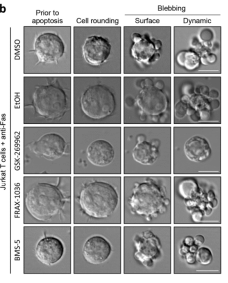 Ubigene has launched more than 3000 kinds of KO cells in stock, covering 27 signal pathways, 26 diseases and 5 categories of drug target. The related cell products for the above mentioned gene, ROCK1, are listed in our cell bank. High-quality homozygous clones deliver in 1 week. Now, only $1980. Buy $5000 get $500 cash back! Click to enter our cell bank>>

2、Study on the signal pathway of breast cancer invasion

In breast cancer, as well as in the occurrence and development of all cancers, there is abnormal expression of protein kinase. It is an important means to find the target of anti-tumor therapy to study the signal pathway in which these protein kinases play a role. In the article "RROR1 Potentiates FGFR Signaling in Basal-Like Breast Cancer" published by Cells, Wei-zhou Zhang’s team summarized the results of past work and found that receptor tyrosine kinase like orphan receptor 1 (ROR1) is overexpressed in basal breast cancer and other types of cancer, and the degree of its overexpression has obvious correlation with patient prognosis.[3] 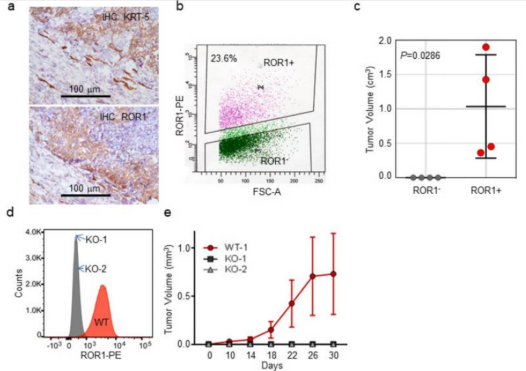 Subsequently, Zhang's team constructed a ROR1 knockout MDA-MB-231 cell line using CRISPR/Cas9 technology, and carried out subsequent protein level analysis using KO cell lines and WT cell lines. The results showed that ROR1 could regulate the expression level of downstream FGFR. In the ROR1 knockout cell line constructed by CRISPR/Cas9, the knockout cells lost the ability to up regulate the level of FGFR protein. The FGFR protein was at a low level, the downstream pAKT was also significantly reduced, and the invasiveness of cancer cells was significantly reduced. Thus, the mechanism of protein kinase ROR1 in basal breast cancer is confirmed, and ROR1 will be a potential target for cancer treatment, and can be used as a tumor marker for screening breast cancer. 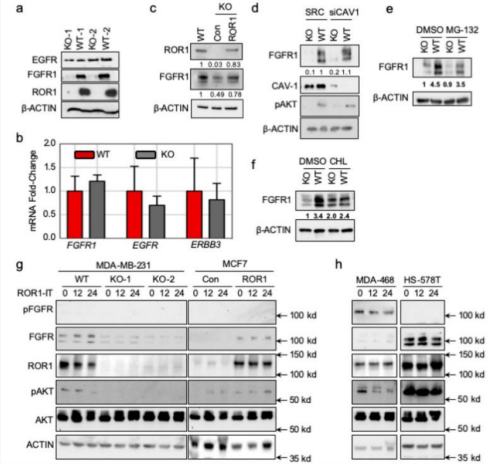 3、Study on the mechanism of cellular glucose metabolism

Li’s team used CRISPR-Cas9 technology to construct the PKM1-KO 4T1 cell line and the PKM-KO 4T1 cell line for the two subtypes of PKM. Using isotope labeled glucose and glutamine to observe the production of the subsequent products of glucose metabolism, it was found that PKM reduced the level of intracellular glucose stock, thus increasing the ratio of α-Ketoglutarate to Citric acid, thereby promoting the production of glutamine derived Acetyl CoA through the reduction pathway. 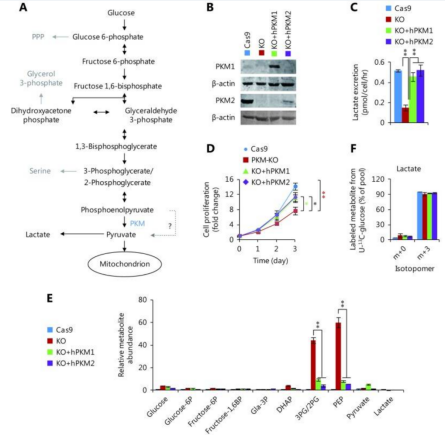 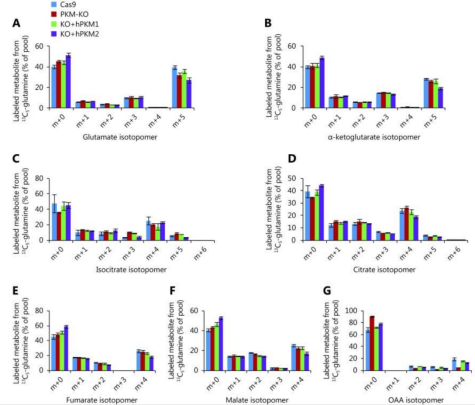 Subsequently, the following in vivo experiments confirmed that PKM2 plays a key role in promoting reductive glutamine metabolism and maintaining proton homeostasis, elaborated the importance of PKM2 to normal cell physiological functions, and suggested that inhibiting PKM2 is not a priority strategy for cancer treatment.

The above three research cases indicate that the CRISPR/Cas9 technology has become an efficient tool to precisely control variables. Ubigene has been dedicated to CRISPR/Cas9 gene editing cell lines, and has developed the CRISPR-UTM system which allows the editing efficiency increase to 10-20 times than that of traditional technology.Now we provide more than 3000 in-stock knockout cell lines, such as ROR1 and PKM. Our express custom KO service deliver the KO clone in 4 weeks, now it is only $2980. Order now and enjoy $500 cask back! Get a quote>>