The microorganism Escherichia coli (E.coli) has a long history in the biotechnology industry and is still the microorganism of choice for most gene manipulation research. Factors such as its ability to grow fast using cheap media and availability of molecular tools to perform genetic manipulations are favorable for using E. coli as a model organism in molecular genetics. General people have known E. coli for the infectious nature of one particular strain (O157:H7) but few people are aware of how versatile and widely used it is in research as a common host for recombinant DNA (new genetic combinations from different species or sources). Several key discoveries in the field of molecular biology, including molecular genetics, were achieved using E. coli as a model organism. This includes an understanding of the genetic code, the mechanisms of DNA replication, the discovery of the genetic operon systems, and the creation of a genetically modified organism.

Of all the model organisms and tools for genetic modification available, Escherichia coli stands out as a model organism and what we would like to call the “molecular biologist toolbox”. Regarding genetic modifications and tools for modifying E. coli is highly potential to generate plasmid vectors, single and multiple gene knockouts, whole-genome editing, biosensor (generation and applications), synthetic gene circuits, and genomes.


However, a traditional method for E. coli genetic manipulation required multi-steps selection process to generate mutant and leave a scar sequence in the place of deleted gene. So, the traditional genetic manipulation methods for engineering E. coli, are still time consuming and laborious. Ubigene developed CRISPR-B™ for gene manipulation of E. coli. Thereby, possible to achieve a one-step seamless genome editing in E. coli species with the utilization of the CRISPR/Cas9 system. The CRISPR/Cas9 and the λ-Red recombination systems used for rapid, precise, and seamless genetic manipulation in E. coli. Ubigene can customize the gene-editing in E. coli as well as can generate various genes modification in microbes. 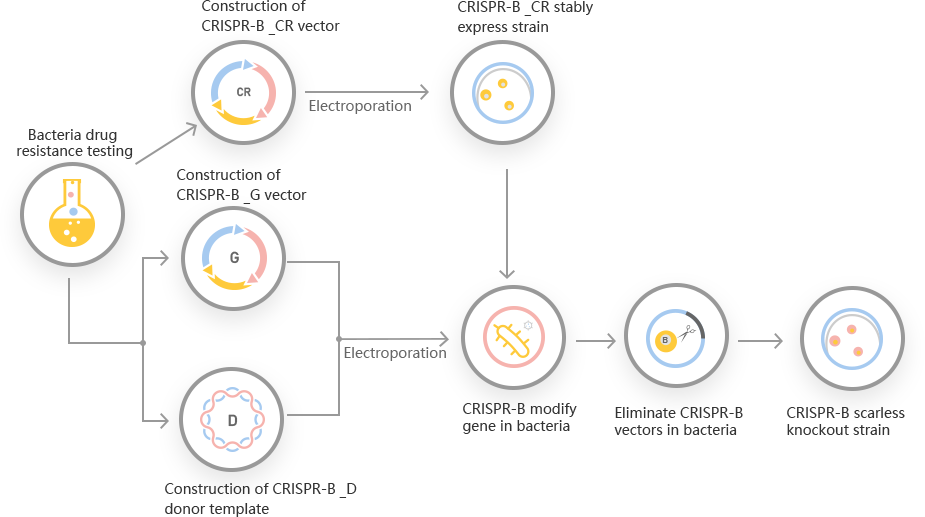 Biofuels produced from lignocellulosic biomass has been considered a feasible alternative to fossil fuels. Biobutanol is a renewable alternative that possesses various important advantages compared to ethanol, including higher energy content, hydrophobicity, octane number, and lower vapor pressure, which provide better blending ability with gasoline at any fraction. Besides, it can be used directly in conventional engines without any modification. In this study, the researcher used CRISPR/Cas9 tool to integrate a large portion of DNA fragment carrying a butanol pathway into E. coli genome an efficient xylose-utilizing host, i.e., E. coli SSK42 (Fig. 1), and produce butanol from xylose as a sole carbon source in a defined medium. They considered the Clostridial-based fermentative pathway for n-butanol production in E. coli, except for the first pathway enzyme acetyl-CoA acetyltransferase (THL) from E. coli itself and the intermediate enzyme trans-enoyl coenzyme A (CoA) reductase (TER) from the T. denticola (Fig. 1). 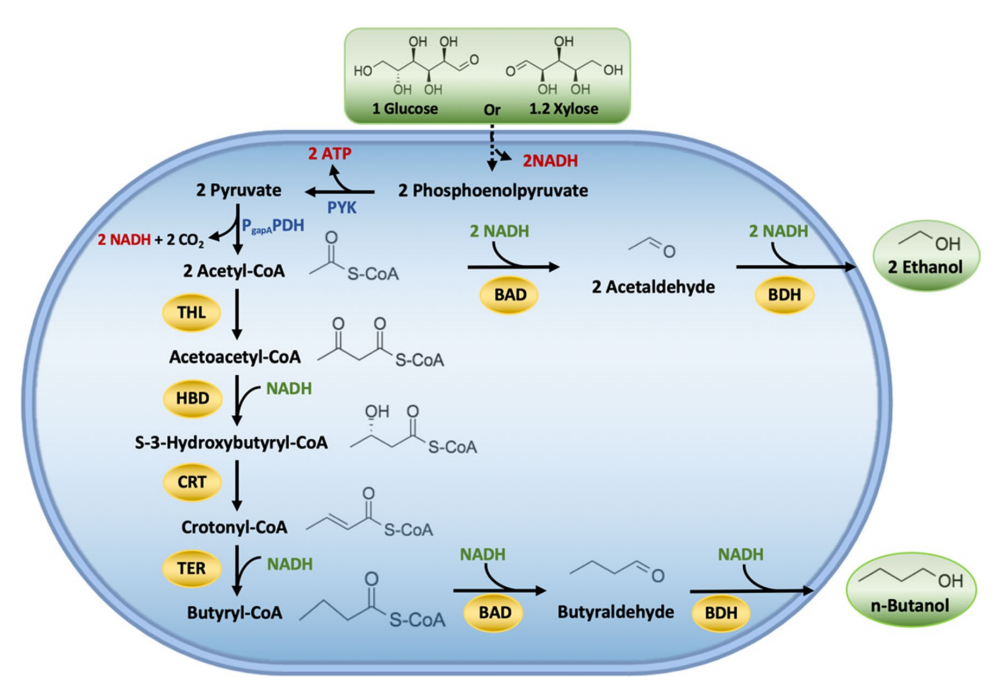 The researcher optimized a synthetic construct that contains two operons under the control of T5 promoter. The first operon contains atoB, hbd and crt genes, and the second operon contains adhE2 and ter genes. A homology arm of 600 bp of an intergenic region SS9 (safe site 9) was introduced to the 5′ and 3′ ends of the construct for genomic integration via CRISPR/Cas9 technique (Fig 2). 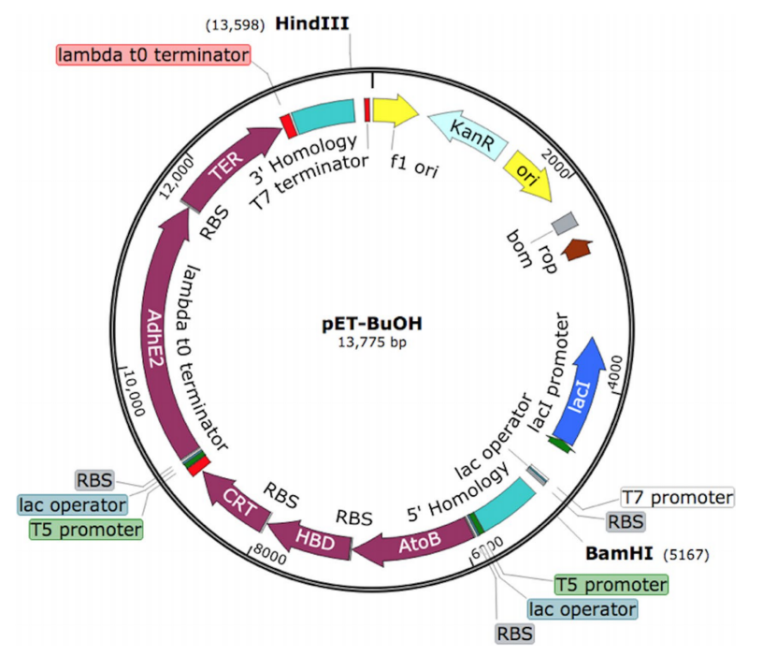 Fig 2: The optimized synthetic construct of an essential set of genes for butanol production.

For producing butanol from xylose, they considered a xylose-fermenting ethanologenic E. coli strain SSK42 as a platform host for metabolic engineering. They deleted the endogenous adhE gene of SSK42 via P1 phage transduction and then integrated synthetic butanol pathway cassette in its genome using CRISPR/Cas9 technique to divert carbon flux towards butanol (Fig. 1). The newly engineered strain ASA02 was evaluated for its ability to produce butanol via. induction of butanol operons using 0.01 mM IPTG and optimal xylose concentration for butanol production. (Fig. 3a, b). 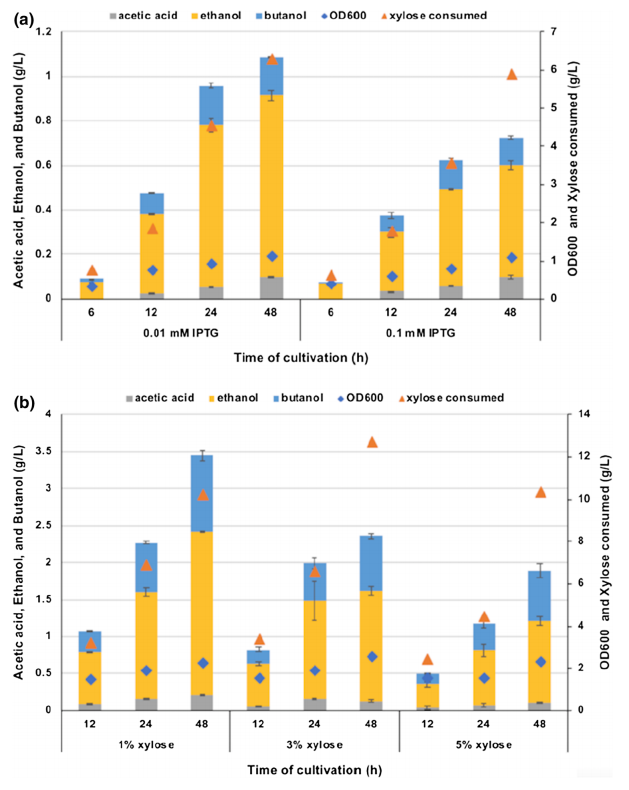 Fig 3: Comparison of the effect of different IPTG and xylose concentrations on the production of alcohol in E. coli ASA02 strain. 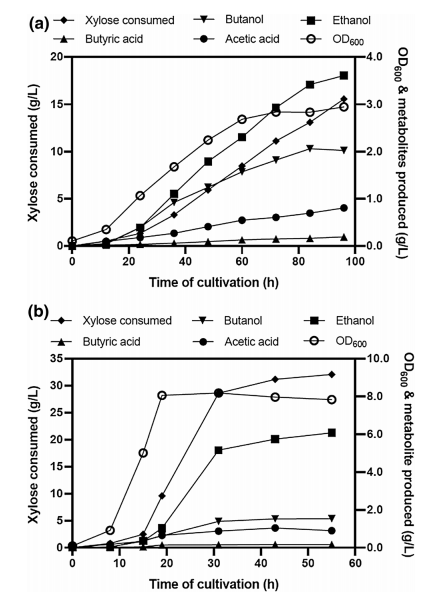 They performed a fed-batch fermentation where initiated batch fermentation in 1% xylose and then further added xylose intermittently to maintain the level ~0.5–1% in the bioreactor. They tested the impact of airflow rate on butanol production under the microaerobic condition and this experiment was conducted by supplying airflow in the headspace at the rate ranging from 0.03 to 1.66 VVM.  They observe that the butanol production increased when the airflow rate was increased from 0.03 to 0.08 VVM and then decreased upon a subsequent increase in the airflow rate. They found that a consistent increase in butanol formation throughout the fermentation at 0.08 VVM of airflow rate, which reached 4.3 g/L at 188 h with 0.13 g/g xylose yield (Fig 5).

Fig 5:  Fed-batch fermentation profile of E. coli ASA02 strain. Cells were grown in AM1 medium with xylose under micro-aerobic conditions.

Antibiotics have significant impacts on health care since their first introduction in the early 20th century. Antimicrobial resistance genes (ARGs) often present on mobile genetic elements, can be transferred among bacteria, which led to the global prevalence of antibiotic-resistant bacteria. The plasmid-mediated mobilized colistin resistance gene (mcr-1) was discovered in 2015.  Horizontal transfer of mcr-1 gene to diverse bacterial species poses a serious threat to public health, which urgently needs the introduction of novel antimicrobial strategies. Herein, the researcher used CRISPR/Cas9 system to sensitize bacteria to colistin and reduce the propagation of the mcr-1 gene by curing mcr-1-harboring plasmid in Escherichia coli (E. coli). Re-sensitize colistin-resistant E. coli by curing mcr-1-carrying plasmid is considered as a potentially effective method to resist the dissemination of colistin resistance genes. 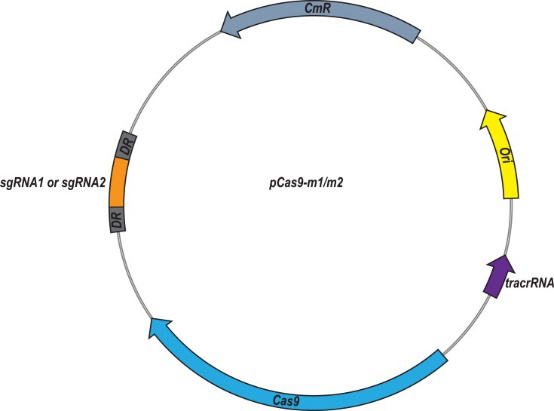 CRISPR/Cas9 system can efficiently eliminate plasmid from E. coli, the control vector pCas9, and the engineered vector pCas9-m1 were transformed into competent E. coli C600+pHNSHP45. The results showed that the 582bp fragment indicating the presence of mcr-1 gene failed to be amplified from 18/24 colonies transformed with pCas9-m1(Fig. 2A). The competent cells of E. coli C600+pUC19-mcr-1 were used as host and transformed with pCas9-m1. The colony PCR showed that 24 colonies were mcr-1 negative (Fig. 2B). These results indicate that mcr-1-harboring plasmids could be efficiently eliminated. 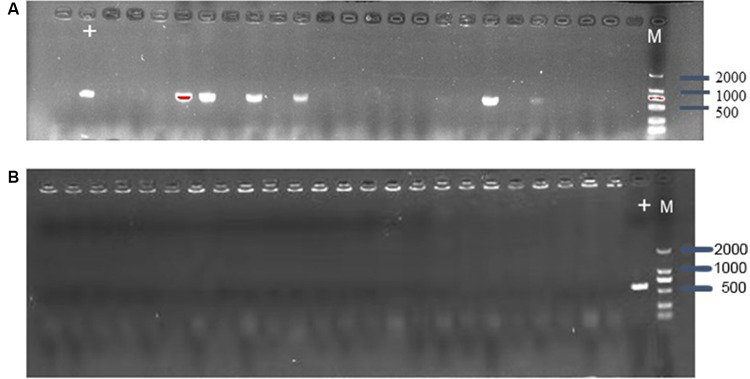 Fig-2: (A) Confirmation of mcr-1 gene presence in E. coli C600+pHNSHP45 by PCR amplification with primer mcr-1-JD-F/R.  (M- marker, the + lane is strain transformed with pCas9 as a positive control. The other lanes strain transformed with pCas9-m1). (B) Confirmation of mcr-1 gene elimination in C600+pUC19-mcr-1 by PCR amplification with primer mcr-1-JD-F/R.

To further evaluate editing efficiency, the relative copy number of plasmids at each time point in pCas9-m1 or pCas9-m2 treated group and pCas9 control group was determined by qPCR. Significant differences in plasmid copy numbers can be seen between the experimental and control groups (Fig. 3).  These results clearly indicate that the engineered CRISPR/Cas9 system can effectively eliminate mcr-1 gene and the length of sgRNA sequence has no significant effect. 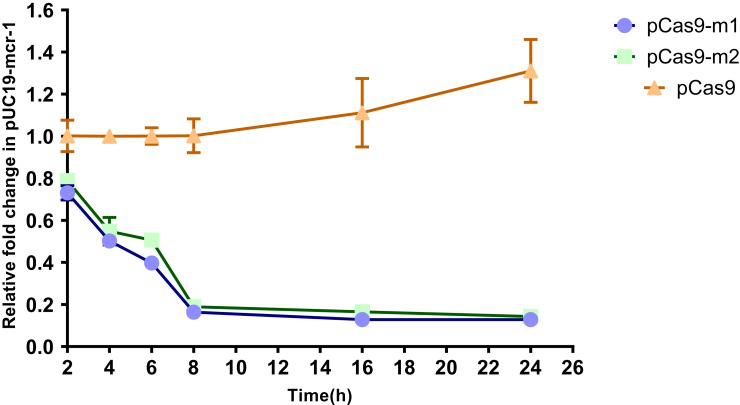 Bacterial conjugation is an important way to mediate the horizontal transfer of resistance genes. The CRISPR-Cas system is an adaptive immune system of bacteria and archaea, which can generate immune memory to foreign DNA. The engineered CRISPR/Cas9 system in bacteria could block plasmid conjugation. The researcher found that the engineered CRISPR/Cas9 system in the recipient cell could block the horizontal transfer of the conjugative plasmid pHNSHP45 (Fig. 4).

when pCas9-m1 was transformed into E. coli C600+pHNSHP45, there were 6/24 colonies still resistant to colistin. To explore the basis of escape, they extracted plasmids from escape mutants and sequencing. The found that mutants escaped through spacer mutations in the CRISPR locus, deletions in tracrRNA, and transposon insertions in Cas9 as presented in fig.5.

In summary, an engineered CRISPR/Cas9 system could be used to efficiently re-sensitize resistant isolates to colistin and reduce the horizontal transfer of the conjugative plasmid pHNSHP45. Together, the CRISPR/Cas9 system is an attractive alternative against antibiotic resistance, and highly potential for clinical application.