Respiratory disease is a common and frequently occur disease, including bronchitis, pneumonia, pulmonary tuberculosis, chronic obstructive pulmonary disease (COPD), lung cancer and nasopharyngeal carcinoma. In addition, there are other congenital pulmonary disease, such as loss of surfactant protein, cystic fibrosis (CF), α-1 antitrypsin (AAT) deletion, etc. Although these rare respiratory diseases incidence rate is low, it will have a significant impact on the health and life span of patients.

With the help of CRISPR/Cas9, people have made many breakthrough researches and applications in respiratory system. In addition to providing pre-clinical models for the exploration of pathogenic factors and potential mechanisms of many respiratory diseases, it can also find new disease drivers or drug targets by screening genes involved in respiratory process, development and pathology, and even directly edit epigenetic markers leading to respiratory diseases. Combined with other technologies such as stem cell reprogramming and transplantation to correct gene mutations, it provides the possibility for personalized treatment in the future (Fig. 1). 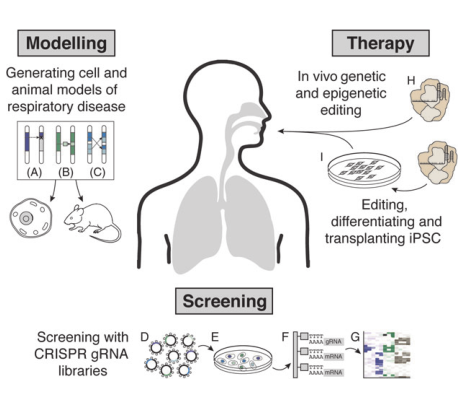 1.Knockout of Grhl2 to study its role in regulating the morphology and physiology of epithelial tissue

The structure, tissue and cells of the airway arranged by pseudostratified mucosal ciliated epithelium in mammalian lung are very important for many physiological functions. However, when performing many physiological functions, lumen cells are vulnerable to viruses, inhaled poisons and inhaled gastric acid. Fortunately, the loss of lumen cells is usually compensated by the mobilization of undifferentiated stem/progenitor cells close to the substrate. In the stable state, these basal cells (BCS) are relatively static, but when the cells in the cavity are absent, they will proliferate and differentiate into ciliated and secretory cells. Although great progress has been made in the regulation of BC cell self-renewal and offspring lineage selection, the mechanism driving BC cell morphological changes is still unclear. Therefore, through CRISPR/Cas9 system editing technology, Hogan’s group infected HBE cell line with lentivirus targeting Grhl2 to obtain Grhl2 knockout cell line, and found that Grhl2 knockout would inhibit organoid morphogenesis and ciliary cell differentiation, and reduce the expression of notch and ciliary genes (Mcidas, Rfx2 and Myb) with different Grhl2 regulatory sites. It provides further evidence for the role of Grhl2 in regulating the morphology and physiological function of epithelial tissue, and also provides a model for better understanding the function of airway epithelium.

2.Knockout of Nrf2 to study the protective mechanism of oxidative stress mediated by oligomeric proanthocyanidin

Oxidative stress can lead to pulmonary fibrosis and respiratory diseases. Oligomeric proanthocyanidins have been proved to have a protective effect on hydrogen peroxide induced oxidation in non-small cell lung cancer cell line (A549) by CRISPR/Cas9 technology. It was found that the expression of Nrf2 changed in A549 cells stimulated by oligomeric proanthocyanidins. Nrf2 is a transcription factor sensitive to redox reaction, which can cause changes in its downstream target genes at the transcriptional and protein levels. Knockout of Nrf2 by CRISPR/Cas9 technology can make Nrf2 unable to bind to the antioxidant response element ARE, thus eliminating the protective effect of oligomeric proanthocyanidins against hydrogen peroxide induced oxidative stress. Studies have shown that oligomeric proanthocyanidins play an important role in the antioxidant response of A549 cells through Nrf2-ARE pathway. This study provides a theoretical basis for the treatment of respiratory diseases.Ubigene now offer in-stock Nrf2 knockout cell line in A549, THP-1, RAW264.7 backgrounds, only $1980, deliver in 1 week, click here to learn more >>

CRISPR/Cas9 technology has been used as an intervention for lung cancer in clinical trials. This research mainly studied the function of PD-1. PD-1 can only be expressed in activated T cells. This gene can promote cell apoptosis and is a clinical immune checkpoint. Therefore, researchers found that the survival time of T cells would be prolonged when PD-1 was knocked out, because the T cell cycle checkpoint was inhibited, resulting in the prolongation of the survival time of activated T cells. After PD-1 gene was knocked out by CRISPR/Cas9 technology, the number of activated T cells with immune function in blood increased significantly, so as to inhibit tumor growth. KO cells can not only be used to study the regulation of T cell activity and enhance its antitumor effect, but also play a good role of negative screening or negative control in verifying and screening immune checkpoints. Ubigene’s KO cell bank covers most of the immune checkpoints, click here to explore this collection >>

4.Application of CRISPR/Cas9 technology in the treatment and diagnosis of genetic diseases

CRISPR mediated gene therapy correction in cystic fibrosis (CF) and other congenital diseases has some advantages over traditional gene therapy. Because the gene modification induced by CRISPR system is permanently maintained in edited cells, while the modified gene is still controlled by its endogenous promoter. Therefore, people pay much attention to the use of CRISPR/Cas9 technology to correct genetic diseases; In addition, CRISPR system can also be used as a diagnostic tool. At present, CRISPR system has been used for the detection of microRNA biomarkers and the enrichment of a small number of alleles of cell free DNA before the diagnosis and detection of NSCLC patients. This diagnostic application may be more feasible than in vivo gene editing or cell transplantation strategies, and may have a direct and positive impact in the clinical environment.

In conclusion, CRISPR system has surpassed the previously available gene editing methods and become an important milestone in molecular biology in this century. The system has been widely used in the construction of cell and animal models of respiratory diseases and the screening of factors related to the development of respiratory infection and lung cancer, which provides promising treatment possibilities for lung and respiratory diseases. However, the following obstacles must be overcome:

3. Target cells and route of administration

5. Effects of immunogenicity and DNA damage response on CRISPR