Cervical cancer remains the leading cause of gynecological tumor-related mortality worldwide and the second most common malignancy in women, and persistent HR-HPV (high-risk human papillomavirus) infection is the main cause of it. At present, HPV preventive vaccines are not effective for patients who already have a cervical disease. Therefore, patients need medications to treat existing HPV infections and thus block the progression of cervical disease. It was reported that a possible cause of cervical cancer is HPV integration, which induces the retention and stable expression of E7 in the human genome. During the long process from HPV infection to CIN and ultimately to cervical cancer, HPV oncogenes, especially E7, are key targets for prevention and treatment. Poly (β-amino ester) (PBAEs), a widely used type of cationic polymer gene carrier, are pH-sensitive, low in toxicity and highly-water soluble and they have high transfection efficiency in acidic drug delivery systems, which makes them compatible with the acidic vaginal environment, and can be more suitable for the treatment of HPV infection.

The researchers used three sgRNAs(designed from Red CottonTM CRISPR Gene Editor Designer) targeting HPV16 E7 and constructed the CRISPR/Cas9 plasmid (provided by Ubigene). HPV16-positive cells (SiHa, CaSki, and S12) and HPV16- negative cells (HeLa) were processed with NPs (PBAE546/ plasmid 60:1) for 6 h, and cell viability was detected by CCK-8 at 24 h, 48 h, and 72 h. Compared with the empty control plasmids, all three NPs effectively reduced the viability of HPV16-positive cells (Figure 1A-C), while no difference was observed in the viability of HPV16-negative HeLa cells. To further explore the inhibitory effect of NPs on tumor growth in vivo, SiHa cells were inoculated subcutaneously in nude mice, and NPs were used for intra-tumoral injection therapy when the xenograft tumor grew to approximately 35 mm3. According to the results of in vitro experiments on cell lines, sgRNA2 had the best inhibitory effect on cell viability and was selected. It was administered every four days for 20 days. In SiHa subcutaneous tumor mice, the HPV16 E7 CRISPR-targeted group showed significant tumor growth inhibition and a significant reduction in tumor volume compared with the empty plasmid delivery group (Figure 2). No differences between groups were observed in mice with HeLa subcutaneous tumors.

In this study, UBIGENE synthesized the control plasmid YKO-RP003-Ctrl and the HPV16 E7-targeting CRISPR plasmids. The sequences were chosen as the best of the three guide RNAs (gRNAs) designed from the Ubigene’s Red CottonTM CRISPR Gene Editor Designer. Click to use it for free >>

If gRNA plasmid is needed, welcome to visit our gRNA plasmid bank for retrieval. 100K+ validated gRNA plasmids start from $20. Click here for more details of this promotion >> 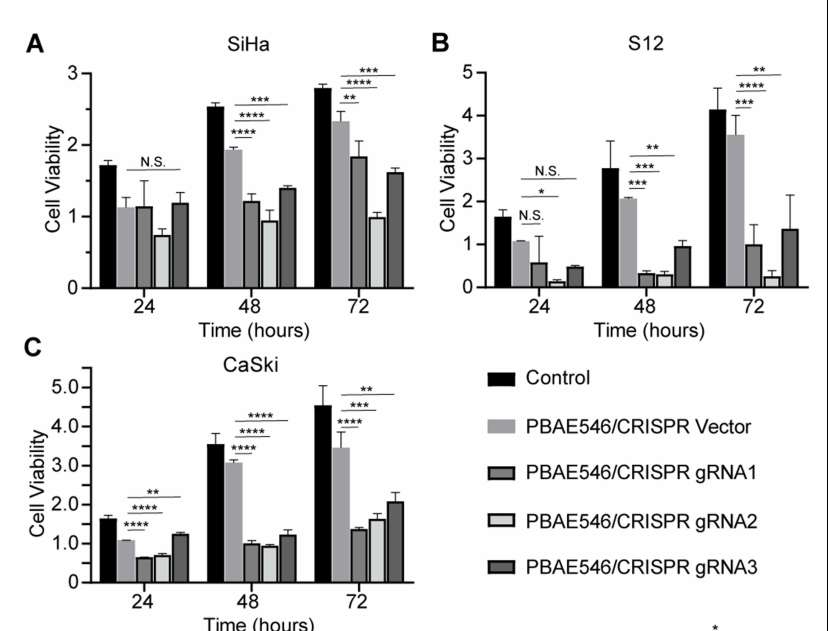 For a closer approach to the primary clinical location of cervical cancer and to pursue noninvasive treatment, they used HPV16 transgenic mice to perform cervical in situ treatment through vaginal administration. After 20 days of continuous treatment, the malignant phenotype of the mouse cervical epithelium was significantly reversed in the NPs group targeting HPV16 E7. The proliferation of epithelial cells was inhibited, the basal cells were arranged neatly, and the volume of the nucleus was reduced. The cervical epithelium of the mice in the control group proliferated significantly (Figure 3A). The expression levels of HPV16 E7 and its related proteins were detected by immunohistochemistry. First, the expression of the target molecule HPV16 E7 and the surrogate marker of HRHPV infection P16 was significantly reduced, while the expression of the tumor suppressor gene RB1, which interacts with the E7 oncoprotein, was restored. Second, the expression of the proliferation-related protein Ki67 and CD34, the cell cycle-related protein CDK2, and the transcription factor E2F1 was significantly inhibited (Figure 3B). These results suggest that the NPs targeting HPV16 E7 can effectively reduce the expression of oncoproteins of target genes and affect related signaling pathways, thus reversing the malignant phenotype of the cervical epithelia of HPV16 transgenic mice. 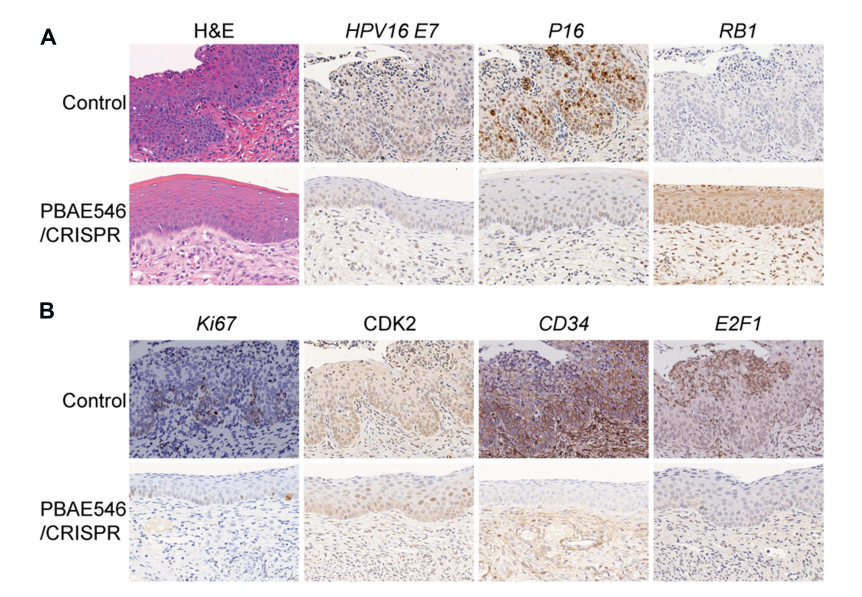 In conclusion, they developed NPs consisting of PBAE546 and CRISPR/Cas9 for the treatment of HPV infection. The NPs are stable and have good transfection efficiency in the acidic vagina, so they are very suitable to be prepared as a vaginal medicine. The NPs disables HPV effectively by targeted knockout of E7. Therefore, these NPs can be used to treat cervicitis and CIN in the future, in the form of vaginal lotions and gels. This study provides new hope for the clinical transformation of nanomedicine to treat cervical lesions, thereby preventing cervical cancer.