TP53 family has evolved for 600-800 million years in the development of multicellular animals. Since the discovery of this gene family, it has taken 40 years to understand why TP53 gene is the most common mutant in human cancer. Evolutionarily conserved p53 protein and its cellular pathway mediate tumor inhibition through a group of informed, regulatory and comprehensive responses to environmental disturbances, leading to tumor cell death or maintaining cell homeostasis. Tumor suppressor p53 plays a key role in cellular stress response. p53 is mainly used as a transcription factor to activate or inhibit the transcription of a variety of downstream target genes. The functions of these target genes mainly include inducing cell cycle arrest, DNA repair, cell aging, apoptosis and the newly discovered ferroptosis. In recent years, with thousands of researches, the mystery of p53 gene has been unveiled.

Gene editing is a powerful tool for scientific research. The construction of gene editing cell line using CRISPR/Cas9 is the most commonly used in studying the function of specific genes. Here we have sorted out the breakthrough research in which the p53 edited cell lines as research tools!

Ferroptosis as a mechanism to mediate p53 function in tumor radiosensitivity（Oncogene，IF=9.8664（2021））
Recently, Professor Boyi Gan's team from MD Anderson Cancer Center of the University of Texas published an article in the journal Oncogene entitled "Ferroptosis as a mechanism to mediate p53 function in tumor radiosensitivity", which determined that ferroptosis is the key mechanism of p53 in regulating tumor radiosensitivity. Ferroptosis plays an important role in radiotherapy (RT) - inducing cell death and tumor inhibition, but the exact genetic background remains unclear. Since p53 is the most common mutant in human cancer, and both RT and ferroptosis are related to p53, the researchers constructed p53 knockout H1299 and A549 cell lines, p53 overexpressing A549 cell line and p53 knockout tumor organoid as research models, and then they determined whether p53 regulates RT-induced ferroptosis.

Finally, it was found that RT mediated p53 activation antagonized RT induced SLC7A11 expression and inhibited glutathione synthesis, thus promoting RT induced lipid peroxidation and ferroptosis. P53 deficiency promotes a part of radiation resistance of cancer cells or tumors through SLC7A11 mediated ferroptosis inhibition. Ferroptosis inducers (FINs) that inhibit SLC7A11 play a significant radiosensitization role in p53 mutated or defective tumor like organs and patient derived xenografts. In addition, it was found that RT induced ferroptosis was associated with p53 activation and better clinical outcomes of RT in cancer patients. In conclusion, this study reveals the role of ferroptosis in p53 mediated radiosensitization, and suggests the use of FINs combined with RT in the treatment of p53 mutated cancer. 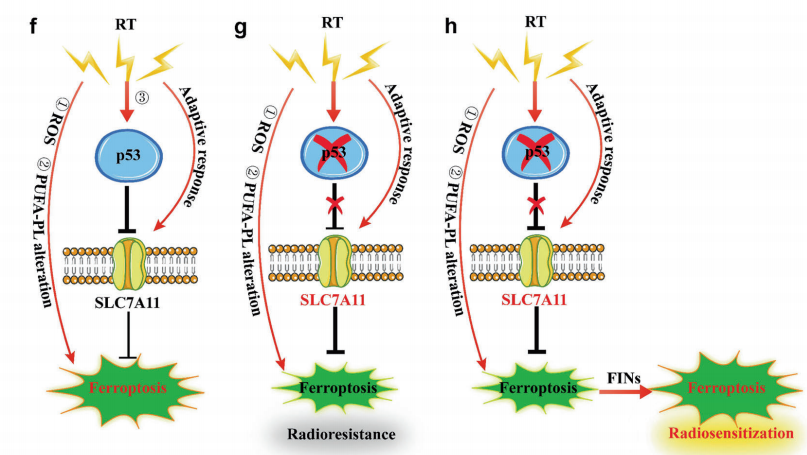 Mutations in p53 gene have been detected in more than half of human cancers. In addition to losing tumor suppressive function, p53 gene mutation may also promote the occurrence and development of tumors, resulting in new carcinogenic phenotypes. This phenomenon is called gain-of-function (GOF) mutation. In the process of studying the mechanism and phenotype of GOF, researchers from Vanderbilt University Medical Center found that GOF is driven by a phenomenon called aneuploidy in p53 mutant cells, which is independent of the TP53 genotype. This not only overturns the existing research conclusions, but also has enlightenment significance for the development of innovative therapies for p53 mutation.

In this publication, in order to study the mechanism and phenotype of mutant p53 GOF, the researchers performed CRISPR/Cas9 genome editing on two non-transformed and tumor derived cell line models (MCF10A cell line and CAL-51 cell line) to express several common p53 mutant proteins (including WT, Null, R175H and R273H), and finally generated a total of 36 different cell line models. The results showed that both MCF10A and CAL-51 gene edited cell lines showed a significant increase in the frequency of aneuploidy. Further studies showed that in vitro GOF phenotypes existed only in p53 mutant expression cell lines with increased aneuploidy expression, and these phenotypes did not depend on the expression of mutant p53 protein. In conclusion, this series of experiments show that aneuploidy, rather than p53 mutation, is closely related to the changes of gene expression, tumor formation and metastasis. This study reveals a new mechanism of p53 mutation leading to cancer, and brings new ideas for the development of therapies for mutant p53. 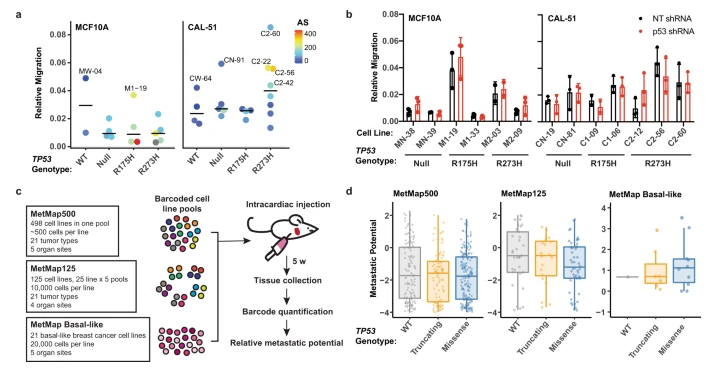 The most common genetic cause of amyotrophic lateral sclerosis (ALS) and frontotemporal dementia (FTD) is the repeated amplification of GGCC in C9orf72 gene. Recently, Aaron D. Gitler from Stanford University School of Medicine and Maya Maor-Nof jointly published an article in Cell entitled “p53 is a central regulator driving neurogeneration caused by C9orf72 poly(PR)”. In this study, the authors developed a modified ATAC-seq that acts on primary neurons, revealed the unexpected role of p53 in poly(PR) - induced neurodegeneration, and provided an example of applying ATAC-seq to neurons to define the mechanism of neurodegeneration.

In order to study whether TDP-43 and poly(PR) aggregates of two ALS related proteins produced by C9orf72 hexanucleotide repeat amplification lead to degeneration through similar or different mechanisms, an in vitro system was constructed, to monitor neuron death and axonal degeneration caused by poly(PR) or TDP-43 accumulation. Specifically, mouse primary cortical neurons were cultured in vitro and transformed into lentiviruses expressing (PR)50, TDP-43 or GFP respectively. Axonal degeneration and neuron death were observed in about 72 hours. Further follow-up ATAC-seq and RNA-seq of DNA and RNA extracted from neurons found that p53 may be a central regulator of neurodegeneration caused by C9orf72(PR)50.

In order to verify this finding, the primary neurons of p53 KO and p53 WT mice were transferred by lentivirus carrying TDP-43 or (PR)50, and concluded that p53 KO neurons could be permanently protected from neurodegeneration caused by (PR)50 rather than TDP-43. Furthermore, the transgenic mouse model constructed by adeno-associated virus vector expressed C9orf72(PR)50 in the mouse brain, and observed the survival of these mice to determine that p53 KO can also be protected from neurodegeneration in vivo.

To investigate whether p53 is involved in the pathogenesis of C9orf72-GGGGCC repeat amplification in humans, the researchers also used iPSCs from patients with C9orf72-ALS and found increased DNA damage in iPSC differentiated motor neurons. After partial reduction of p53 by shRNA, DNA damage level was reduced, suggesting that p53 was activated in C9orf72 positive neurons and induced DNA damage and apoptosis.

Overall, this study revealed the role of p53 in C9orf72(PR)50 induced neuronal degeneration through the application of ATAC-seq in primary neurons and combined with iPSC experimental data from mouse models and clinical patients.

Since p53 was first reported in 1979, thousands of research papers can be found on Medline. Decades of research seem to have given us a full understanding of it. However, with the rapid update and iteration in the field of biotechnology, such as the emergence of CRISPR/Cas9 technology, p53 exploration can be more efficient and controllable, and maybe even overturn past cognition.

Ubigene further developed CRISPR-U™ based on the traditional CRISPR/Cas9 technology. It has a higher gene editing efficiency. At present, Ubigene has successfully edited thousands of genes in about 200 cell lines, and successfully constructed a Knockout Cell Line Bank with nearly 2000 genes. In-stock KO cell line starting from $1980, deliver in 1 week!