Hepatocellular carcinoma (HCC) is one of the most prevalent and lethal human malignancies worldwide. Although HCC treatment has dramatically improved over the last decades, the incidence and cancer-specific mortality of HCC continues to increase in many countries, mainly due to the limited understanding of the underlying molecular pathogenesis and limited available therapies for HCC. Thus, more research is needed to obtain a deeper understanding of pathological processes driving the progression of HCC. Tumor suppressor p53 is activated in response to DNA damage or abnormal activation of oncogenes. It induces a variety of cellular processes, including cell cycle arrest, apoptosis and aging. Studies have shown that p53 plays a key role in the development of HCC.

Many noncoding RNAs play an important role in p53 signaling network, including miRNA and lncRNA. However, the role of small nucleolar RNAs (snoRNAs) in p53 regulatory network is not clear. To uncover this mechanism, Liang Chu, Xiaoping Chen, and Bixiang Zhang from the Hepatic Surgery Center, Tongji Hospital, Tongji Medical College, Huazhong University of Science and Technology published a research paper entitled "Non-coding small nucleolar RNA SNORD17 promotes the progression of hepatocellular carcinoma through a positive feedback loop upon p53 inactivation" in the journal Cell Death & Differentiation (IF2020=15.8). This study reveals the regulatory role of small nucleolar RNA SNORD17 and p53 pathway in hepatocellular carcinoma, which provides a new potential target for the treatment of hepatocellular carcinoma. 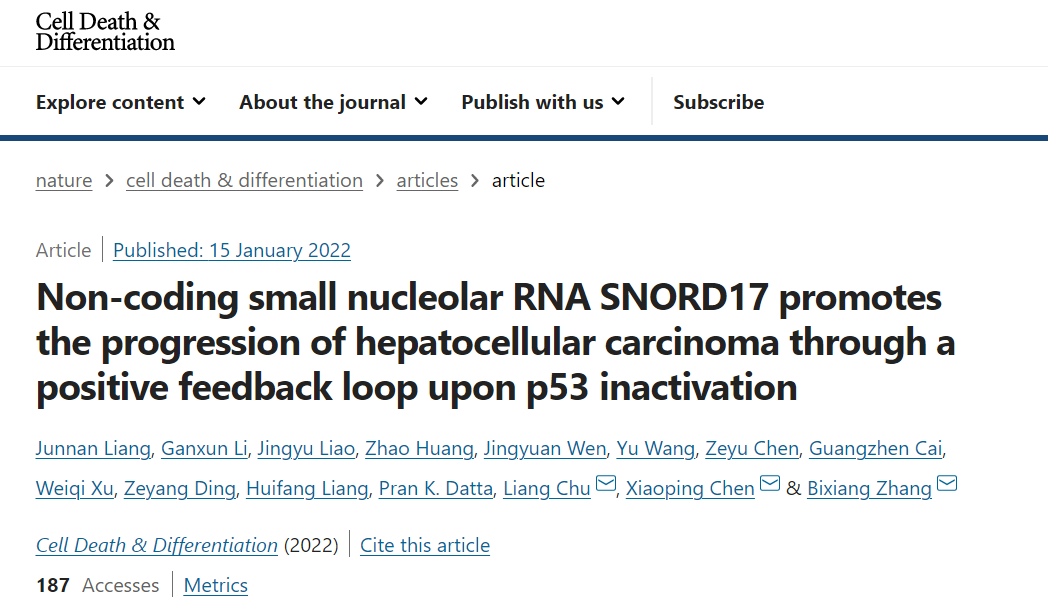 By using Gene Expression Omnibus database (GEO), Kaplan-Meier analysis and qRT-PCR analysis, SNORD17 was screened out as it is related to hepatocellular carcinoma prognosis and is up-regulated in hepatocellular carcinoma tissue. Meanwhile, the high expression of SNORD17 in HCC is positively correlated with tumor volume and vascular infiltration. It is speculated that SNORD17 is an important snoRNA in the clinical detection of HCC. (Fig. 1) 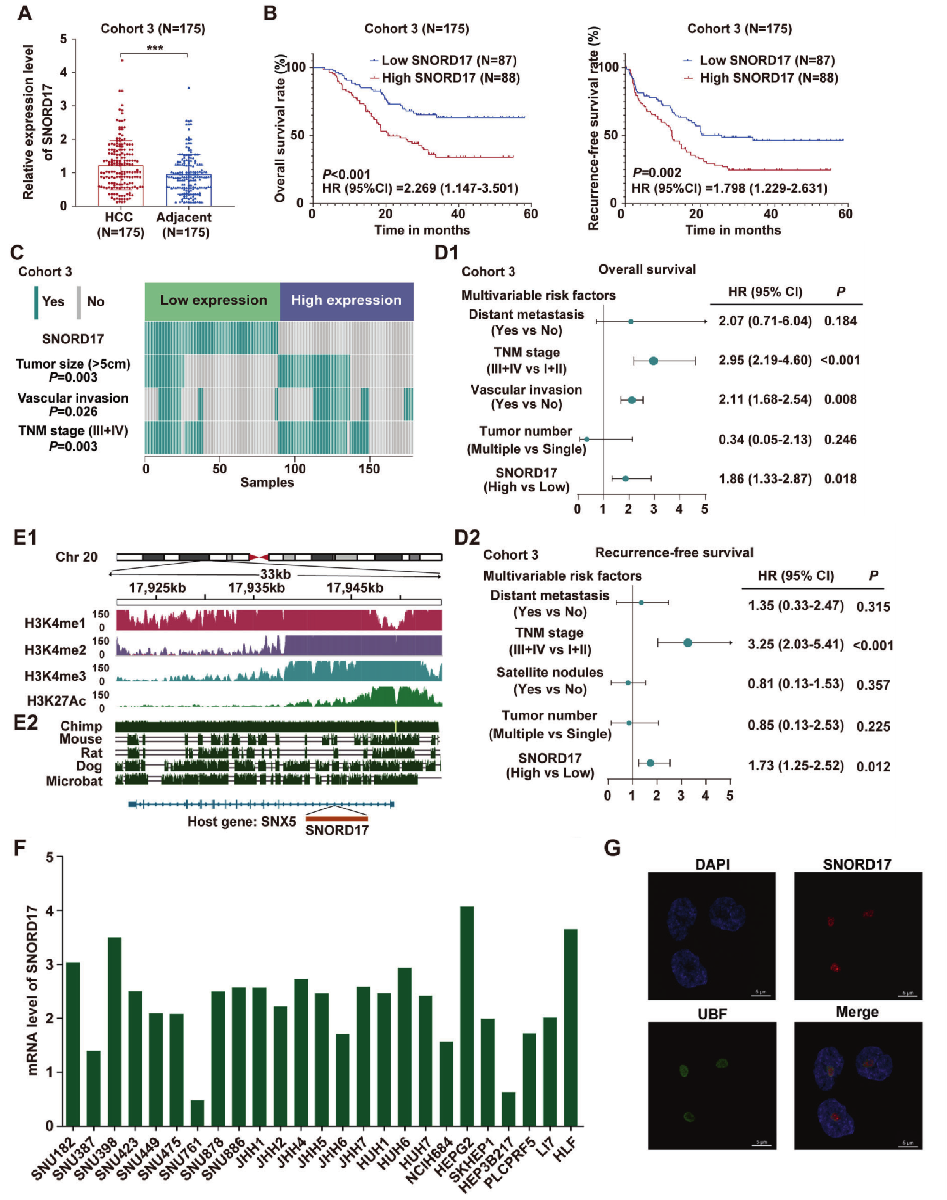 Fig. 1  SNORD17 is an important snoRNA in the clinical detection of HCC

In order to further study the role of SNORD17 in hepatocellular carcinoma, researchers utilized SNORD17 knockout Hep G2 cell line (constructed by Ubigene) and SNORD17 knockdown SK-Hep1 cell line (Fig. 2A). In HCC cell lines, knockout and knockdown of SNORD17 gene can significantly inhibit cell proliferation, clone formation and G1/S phase transition (Fig. 2 B-E). Flow cytometry showed that the knockout and knockdown of SNORD17 gene significantly increased the apoptosis of hepatoma cells compared with the control group (Fig. 2F). To study the role of SNORD17 in the growth of HCC, a subcutaneous xenograft tumor model was established by HepG2 WT cells and HepG2-SNORD17-/- knockout cells. The results showed that knockout of SNORD17 in HepG2 significantly reduced the volume and weight of orthotopic liver tumors compared with the control group (Fig. 2G).

HepG2-SNORD17 knockout cell line in this study is derived from Ubigene. Dual gRNA method and CRISPR-U™ technology are used to KO the full-length sequence of SNORD17. Based on rich gene-editing experience, Ubigene has built a KO cell bank covering 10K+ of genes. The SNORD17 knockout cell line is also available in stock, as low as $1980, deliver in one week! Click here to explore more>> 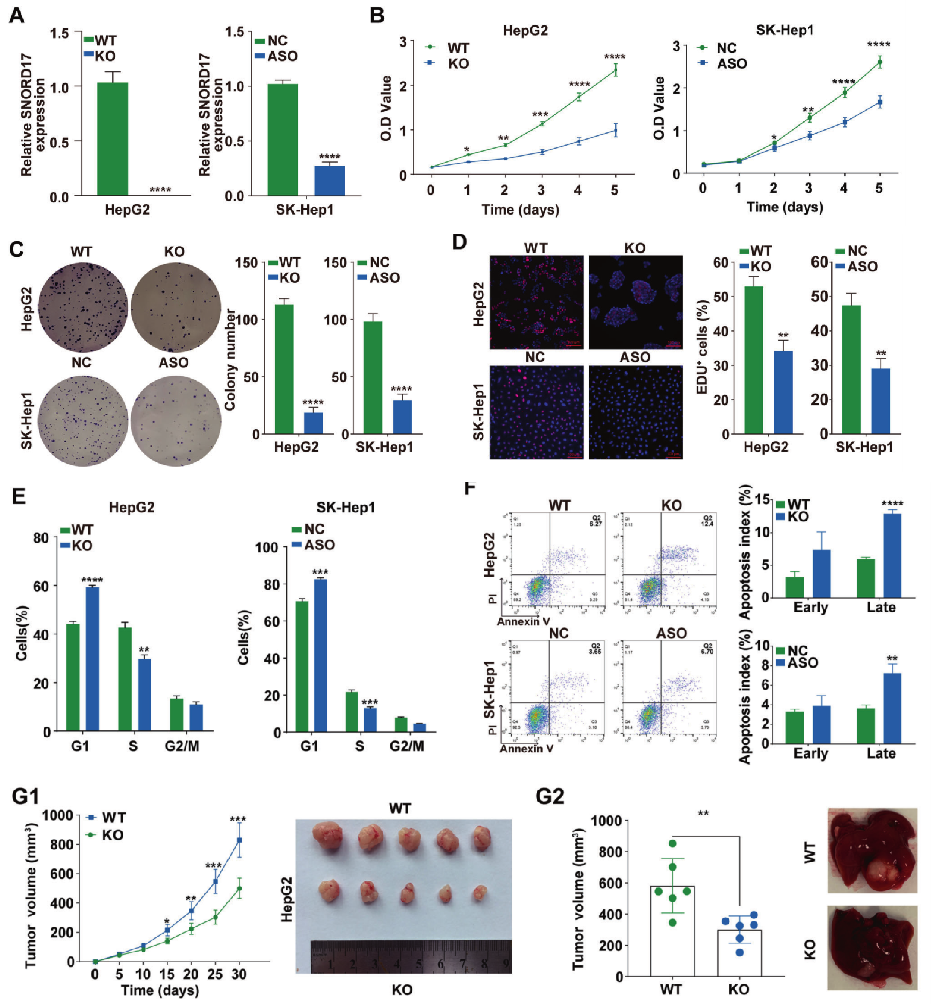 Fig.2  SNORD17 promotes proliferation and cell cycle, and slows down apoptosis of hepatoma cells in vivo and in vitro 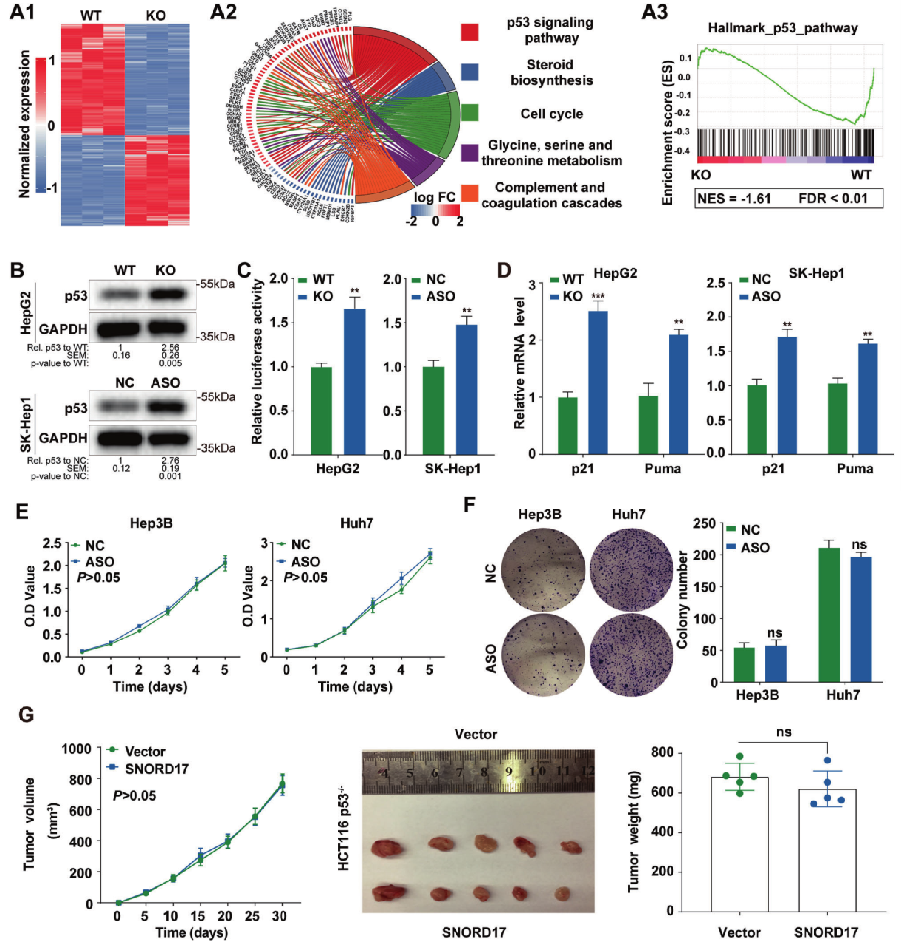 RNA pull-down test found that there were 19 proteins specifically binding to SNORD17, of which MYBBP1A and NPM1 were the most abundant proteins and were reported to be involved in the regulation of p53 (Fig. 4A). RIP detection confirmed that MYBBP1A and NPM1 could interact with SNORD17 in cells (Fig. 4B). Acetylation modification is very important for the activation of p53. It has been reported that MYBBP1A can promote the acetylation of p53. So, what role does SNORD17 play in the process of acetylation modification? Through a series of experiments such as Co-IP, it was found that SNORD17 can anchor NPM1 and MYBBP1A in the nucleolus simultaneously, inhibits the formation of NPM1-MDM2 complex and MYBBP1A-p53 complex in the nucleoplasm, and affect the activity of p53 through ubiquitination and acetylation respectively. Meanwhile, the acetylation modification of p53 can also positively feedback inhibit the transcription of SNORD17 (Fig. 4C). 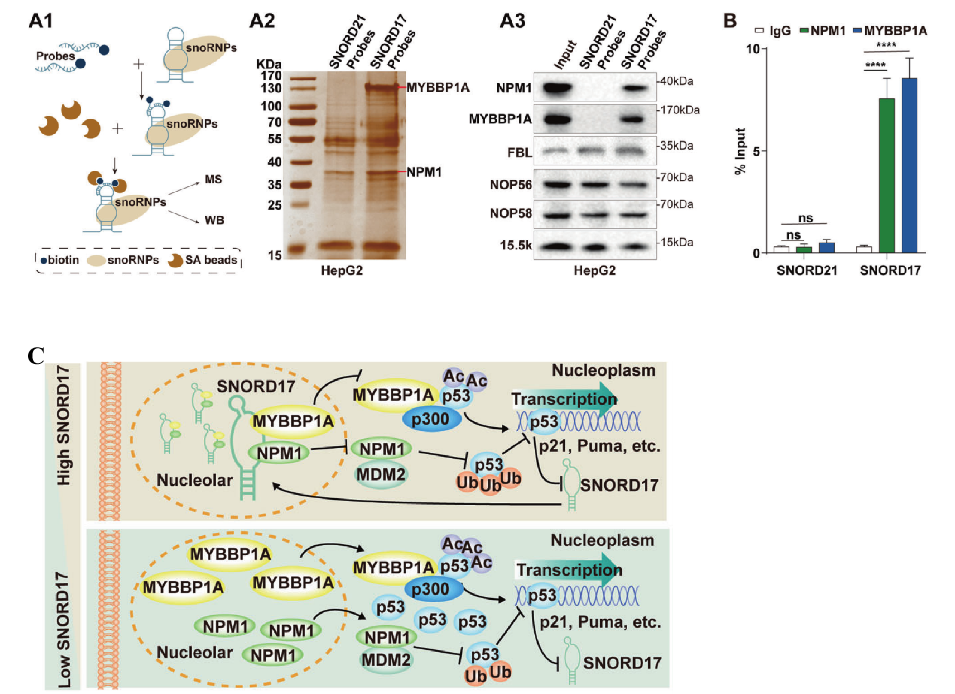 Fig. 4  Relationship between SNORD17 and p53

In conclusion, SNORD17 binds to MYBBP1A and inhibits its transfer to nucleoplasm, so as to inhibit p53 acetylation regulated by acetyltransferase p300. SNORD17 regulates the stability and activity of p53 in HCC, and is expected to become a new target for HCC therapy. At the same time, this study also further confirmed the key role of snoRNAs in tumorigenesis and can be used as prognostic markers of various cancers, which could be a reference for subsequent cancer treatment research.

Ubigene further developed CRISPR-U™ based on the traditional CRISPR/Cas9 technology. It has a higher gene editing efficiency. At present, Ubigene has successfully edited thousands of genes in about 200 cell lines, and successfully constructed a Knockout Cell Line Bank with nearly 2000 genes. In-stock KO cell line starting from $1980, deliver in 1 week!