A human leukemic cell line (THP-1) cultured from the blood of a boy with acute monocytic leukemia. It plays an important role in the studies of regulating tissue homeostasis and inflammatory response. THP-1 cells have been widely used in the research of monocyte and macrophage related mechanisms, signaling pathways, nutrient and drug transportation, and immune response. Compare with U937, HL-60 and ML-2, the morphological and functional characteristics of THP-1 are very similar to human primary monocytes (including cell differentiation markers). Compared with human peripheral blood monocytes (PBMC), THP-1 is easier to be cultured and has a more consistent background. Therefore, THP-1 is a commonly used acute monocytic leukemia cell line in various laboratories, and it is an ideal tool for studying immunity and inflammation.

Gaucher disease (GD) is an autosomal recessive lysosomal storage disorder caused by mutations in the acid β-glucosidase gene (GBA1), resulting in the deficient activity of acid β-glucosidase (GCase), and the subsequent progressive accumulation of glucosylceramide (GlcCer) and glucosylsphingosine (LysoGL1) within the lysosomes. Researchers have focused on developing effective GD cell models that can reproduce the genetic and phenotypic characteristics of the disease, in order to seek better pathophysiological research and develop new treatments. Eleonora Pavan et al. exploited CRISPR/Cas9 technology to edit GBA1 in the human monocytic THP-1 cell line to develop an isogenic GD model of monocytes.

Schematic representation of GBA1 editing workflow is shown in Fig.1A. WB analysis of THP-1 GBA1 mutant D2, D6 and F5 clones showed lower levels of GCase expression in comparison to THP-1 wt (Fig. 1B). And GCase enzymatic activity was significantly reduced in all three clones (Fig.1C). Among them, D2 clone had almost no enzyme activity (the remaining activity of wild-type was 1%). Because GlcCer accumulated in GD cells is transformed by lysosomal acid ceramidase into its deacetylated lipase LysoGL1, it is considered to be a biomarker of GD. Therefore, they detected LysoGL1 in all mutant clones and found that a massive LysoGL1 accumulation was detected in THP-1 GBA1 mutant clone D2 (Fig.1D). Thus, the researchers chose D2 as the GD model. THP-1 GBA1 mutant cells provide a good model for further exploring the pathophysiology of GD, and can be used as an alternative research object for some cells that are difficult to obtain and difficult to proliferate in vitro, such as monocytes from GD patients, macrophages differentiated from monocytes or macrophages differentiated from IPSC.

Ubigene has more than 5000 successful cases on gene editing, among which editing on THP-1 is our signature service. Although THP-1 has the characteristics of difficult transfection and low monoclonal growth rate, we have developed a series of optimization to greatly improve the success rate of THP-1 gene editing. THP-1 cell line custom service is in promotion now. Contact us to discuss your projects with our scientist>> 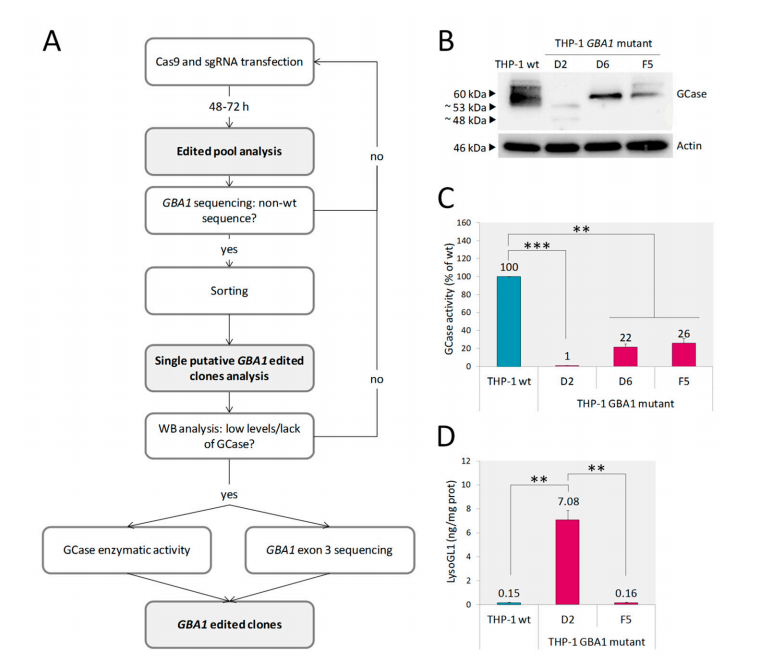 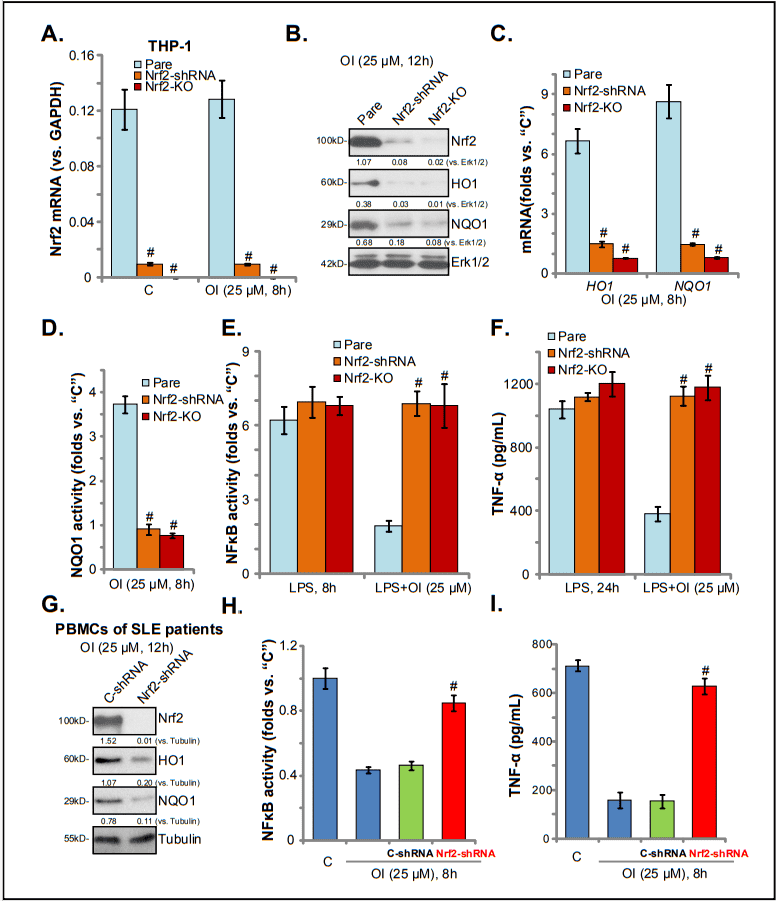 It proves that Nrf2 activation was required for OI-induced anti-inflammatory actions in THP-1 human macrophages and SLE patient-derived PBMCs. Nrf2 silencing or knockout (by CRISPR/Cas9 gene-editing method) almost abolished OI-induced anti-oxidant and anti-inflammatory actions in SLE patient-derived PBMCs and LPS-activated THP-1 cells. A key advantage of this new compound over other Nrf2 activators is that it is directly related to Keap1 and leads to Keap1 acetylation and Nrf2 dissociation, resulting in Nrf2 direct and continuous activation. Thus, OI and itaconate have important therapeutic value for the treatment of SLE.

Interleukin (IL)-38 is a cytokine belonging to the IL-1 family. This cytokine is expressed in the synovium of rheumatoid arthritis (RA). It has been found that mice lacking IL-38 exacerbate arthritis. In order to study whether the overexpression of IL-38 in THP-1 monocyte line in vitro affects its cytokine production, the researchers used lentivirus transfection of THP-1 cells to overexpress human IL-38 (Fig. 3A, B). The results showed that overexpression of IL-38 in THP-1 significantly reduced the expression of IL-6 and IL-23p19 mRNA stimulated by lipopolysaccharide (LPS). In addition, it also significantly reduced LPS induced IL-6 and TNF α, IL-23 and IL-10 proteins secrete 2.5 times (Fig. 3C, D), but IL-1 β was not affected (Fig. 3D).

This study emphasizes the anti-inflammatory effect of IL-38 overexpression in vivo: this cytokine acts on macrophages in inflammatory infiltration, has an indirect effect on Th17 cytokines, and reduces the expression of pro-inflammatory cytokines. However, whether IL-38 can be considered as a new treatment option for arthritis or other inflammatory diseases needs further experimental research.

Overexpression is one of the most common methods to study gene function. Ubigene’s stable cell line construction service provides you with guaranteed stable cell lines, and now we offer 50% off for  single cell clone isolation service. To learn more about our custom service>>

Based on the traditional CRISPR/Cas9 technology, Ubigene has further developed CRISPR-U system, which has higher gene editing efficiency. At present, Ubigene has successfully provided thousands of gene editing cell services for more than 20 countries and regions around the world, and successfully constructed a gene knockout cell bank with nearly 2000 KO cell lines. Now our in-stock KO cell line is only $1980, deliver in one week!