A temporal and spatial control of genome editing holds great potential for genetic disorder treatment and the capacity in investigating genetics variants. Despite advances in precision, targeting range and applicability of CRISPR to therapeutics in recent years, tools to temporally and spatially control CRISPR editing are lagging behind. Uncontrolled CRISPR systems resulting from prolonged or unrestrained Cas endonuclease activity could have unpredictable off-target effects. To solve this problem, a variety of strategies to manipulate the expression of Cas protein or its activity have been proposed. In some cases, the endonuclease Cas9 production can be modulated by an inducer or be produced in a split or an inactive form, which could later be activated upon stimulation with small molecules or by exposure to biorthogonal triggers such as light. Compared with the optimization of producing functional recombinant inducible Cas proteins, the modification of gRNAs (crRNA or single guide RNA) is simple and cost-effective.

Recognizing that the gRNA is the most easily programmable component of the CRISPR system, we set out to investigate gRNAs that could be readily constructed with minimal modification with a complete abolishment of its recruitment to the target genomic region and yet speedily activated in the presence of light. An article named Optical control of CRISPR-Cas editing with cyclically caged guide RNAs reported that the researchers from Beijing National Laboratory for Molecular Sciences Ying-Jie Sun et al. designed a spatiotemporal and efficient CRISPR/Cas9 and Cpf1-mediated editing with photo-sensitive circular gRNAs. This approach relies on only two or three pre-installed photolabile substituents followed by a simple covalent cyclization, which provides a robust synthesize approach in comparison to heavily modified gRNAs. In established cells stably expressing Cas9, the circular gRNA in coordination with light irradiation could direct a precise cleavage of GFP and VEGFA within a pre-defined cutting region. They have also achieved light-mediated MSTN gene editing in embryos, whereas a new bow-knot-type gRNA showed no background editing in the absence of light irradiation. Together, this work provides a significantly improved method to precisely manipulate where and when the genes are edited.

Firstly，circular gRNAs were prepared via copper-catalyzed azide alkyne cycloaddition reactions (CuAAC) with NPBOM incorporated oligonucleotides and different azido-linkers. Comparing with its linear counterpart gRNA with multiple photolabile groups, the new circular gRNA is lack of the flexibility. The several conformational changes not only disrupt the base-pairing interactions with the target DNA sequence to avoid any partially access, but also prohibit the inducing of active conformation of Cas for target DNA editing. Upon the light irradiation, the circular gRNA would rapidly release its conformational strain and the molecule resembles more its linear analogue, restoring the CRISPR/Cas editing capacity. Therefore, the photoactivation control with circular gRNA would afford a rapid and non-invasive activation of CRISPR/Cas activity in a generic manner towards any specified sequences with minimal background editing.

The melting characteristics of the circular GFP-crRNA-c2 and its two linear precursors were investigated (Fig. 1A). It was shown by comparison that the covalent linkage resulted a significant decrease in melting temperature (Tm) comparing to the linear crRNAs, indicating its inability to bind with the template DNA. It means that the DNA interference complex in CRISPR-Cas9 systems was dysfunctional with circular crRNA due to the incapacity in recognizing target site or recruiting Cas9 for DNA cleavage. Moreover, they also found that crRNA-c has the extreme stability against endonuclease degradation. However, the stable circular GFP-crRNA-c released the linear crRNA within 30 seconds upon exposure with a 365nm UV light of an irradiance at 20 mW·cm–2 (Fig. 1C),which means provide an excellent response window for the responsive CRISPR editing. Further studies have shown that this technique is also feasible for CRISPR-CPF1 systems, suggesting that their light-activated circular gRNA strategy is a generic approach for regulating RNA-guided CRISPR editing. 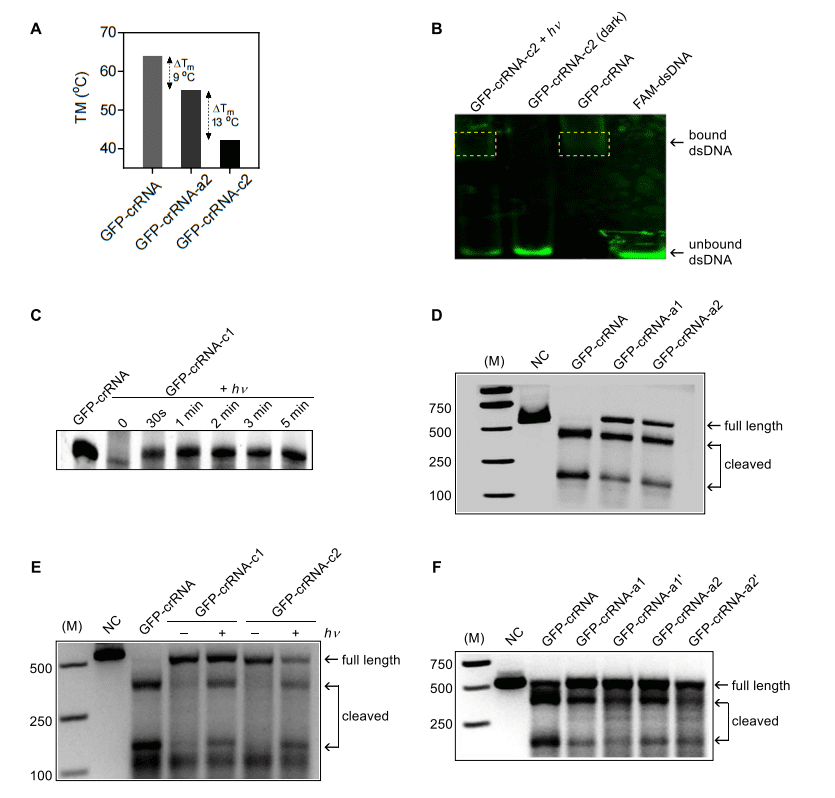 Photomodulation of CRISPR/Cas9 editing with circular crRNA in live cells

Vascular endothelial growth factor A is a potent and specific mitogen for endothelial cells, which is secreted in response to hypoxic and inflammatory stimuli. The researchers employed this photo-responsive CRISPR-Cas9 editing strategy to disrupt the VEGFA gene in human 293T cells. The corresponding NPBOM decorated VEGFA-crRNA-a and the circular product VEGFA-crRNA-c were prepared similarly (Fig. 2B), the latter also exhibited a similar light dissociation pattern, releasing the linear VEGFA-crRNA in less than 1 minute upon UV irradiation (Fig. 2C). To validate the possibility of photoresponsive disruption of VEGFA gene in human cells, they later infected 293T-Cas9 cells (provided by ubigene) constitutively expressing Cas9 with unmodified crRNA to target VEGFA. It was found that circular crRNA-c with a covalently linked ring showed a 9.6% indel efficiency in the dark, and led to a comparable indel efficiency (41.8%) upon 5 minutes’ exposure to UV light by T7 endonuclease I (T7E1) mismatch detection assay. This result was substantially identical from experiments conducted with the native crRNA (53.9%). Taking together, all these results provide as proof of concept of the possibility of implementing a photo-responsive gene editing technique with circular gRNAs. 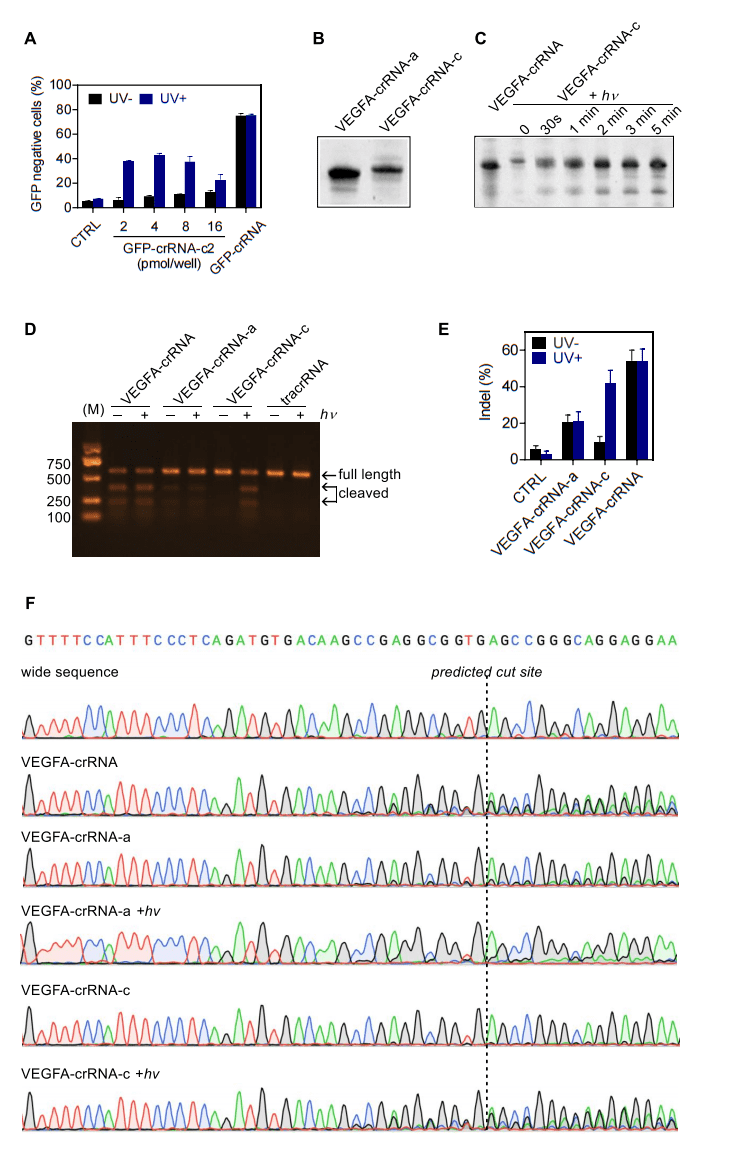 At last, the researchers realized the spatiotemporal control of CRISPR/Cas-based gene editing of MSTN in zygotes, which established that this biorthogonally activatable circular guide RNA was applicable to control the CRISPR systems by using the method combine external light stimuli. They predict that these features will be used to investigate spatiotemporally complex physiological events since it will help to better understand the dynamics of gene regulation.

Ubigene specializes in cell line engineering, and we have successfully delivered different types of projects, including custom cell line construction, virus packaging, and plasmid construction to our customers all over the world. Also, Ubigene has established a KO Cell Line Bank with 3000+ in-stock KO cell lines and released a series of EZ-editor™ Gene-editing Products, such as Gene Knockout kit, etc. Our aim is to 'Make genome editing easier'! For more information, please contact us!