Have you used the stable cell clones instead of cell pools for your research?

Have you used the stable cell clones instead of cell pools for your research?

Stable cell line generally refers to a cell line that stably overexpresses or inhibits a specific gene in a cell line. The construction of stable cell line is to clone the DNA or shRNA of specific gene to the recombinant plasmid, introduce the expression frame of the target gene into the host cell line with the help of lentivirus system or transposon system and integrate the sequence into the host genome. This can achieve the prolonged, stable expression of the target gene. Compared with the transient transfection method, lentivirus transduction method and transposon method can effectively improve the transfection efficiency and further improve the expression efficiency of the target gene.

When are the stable cell lines needed?

1. When it is necessary to study the function of a gene in the target cell for a period of time, the stable cell line can continuously and effectively ensure the gene expression level, reduce repeated transfection and the experimental cost;

3. When the protein function in the target cell line lasts for a long time, transient inhibition cannot effectively inhibit the expressed protein function. Constructing a stable knockdown cell line can stably maintain the low-level expression or non-expression of genes and increase the stability and authenticity of the experimental data;

At present, the application of stable cell lines is still mainly concentrated in the polyclonal cell stage (cell pool). The stable cell pools can be used for experimental analysis after virus infection and antibiotic screening. The advantage of stable cell pool is that researchers can quickly obtain experimental results and analyze the trend of experimental data. If the experiment lasts for a long time, it is necessary to continuously add antibiotics for screening to maintain the proportion of highly expressed stable cell lines in the mixed cell pool. However, the experimental results will fluctuate with the change of the proportion of stable-cell line, and it is difficult to ensure the stability and effectiveness of the data. In this case, it may also have a "Huge reversal" in your experimental conclusion.

When treating cancer with chemical drugs, the most common problem is the development of drug resistance. P-glycoprotein (P-gp) is an ATP binding cassette (ABC) transporter encoded by MDR1 gene. Overexpression of P-gp will increase the outward transport of active drugs, reduce its effective concentration and cytotoxic effect in the cytoplasm, and thereby lead to multidrug resistance (MDR). Caveolin-1 is a vesicle outer membrane protein, which can interact with some proteins such as H-ras and protein kinase Cα, G protein, eNOS, src family tyrosine kinase and EGFR and participate in the regulation of signal transduction. Abnormal expression of Caveolin-1 protein can be found in many diseases such as cancer, diabetes, Alzheimer's disease, cardiovascular disease and muscular dystrophy. In order to explore the molecular mechanism relating caveolin-1 and P-gp, caveolin-1 was overexpressed in multidrug-resistant breast adenocarcinoma cell line Hs578T/Dox, and the stable cell clones with sustained high expression of caveolin-1 was obtained through single-cell clone isolation. The stable clones with the highest expression of caveolin-1 were selected for the follow-up study. By detecting the changes of P-gp and MDR1 genes in single-cell clones and comparing the drug resistance and P-gp transport activity of cell lines, it was found that the single-cell clones overexpressing caveolin-1 reduced drug resistance by inhibiting the expression of MDR1 gene.

Middle East respiratory syndrome coronavirus (MERS-CoV) was isolated from a patient with acute pneumonia and renal failure from Saudi Arabia. It is a highly pathogenic coronavirus after SARS-CoV. MERS-CoV uses CD26 as the receptor to infect the host, which can cause multiple organ infections in human body. MERS-CoV spike protein has receptor binding domain (RBD) which plays an important role in host receptor binding, membrane fusion, and cell entry. Therefore, this domain is also an important key of vaccine R&D. In mouse and rabbit models, recombinant human Fc fragment and MERS-CoV RBD residue can increase the expression of MERS-CoV antibody and show strong activity against nearly 20 human cell lines and camel Middle East respiratory syndrome coronavirus. This kind of antibody mainly prevents the invasion of cell lines by blocking the binding of Middle East respiratory syndrome coronavirus RBD to cell surface receptor DPP4. The initial research and preparation of the vaccine can be obtained by expression and purification of HEK293 cell line. While preparing a large number of vaccines, the cell line that can stably express a large number of MERS-CoV protein vaccine antigens is needed. Researcher performed the single-cell cloning on the MERS-CoV protein overexpressing susCHO, and the single-cell clones with the highest expression of MERS-CoV protein was identified by ELISA. By comparing the growth curves of monoclonal-susCHO and pool-susCHO, it was found that both cells reached the maximum number of cells on the 7th day of culture, and their cell density was 8×106 cells/mL and 7×106 cells/mL (fig. 1 A). SDS-PAGE analysis of the supernatant of the culture medium (Day 7) showed that the monoclonal-susCHO expressed 32 mg more MERS-CoV protein than the pool-susCHO in every 1L of the supernatant. Therefore, it can be seen that the clones with the best cell condition and the most appropriate protein expression can be selected through single-cell isolation. Single-cell cloning can significantly improve the yield of antibodies and economic benefits. 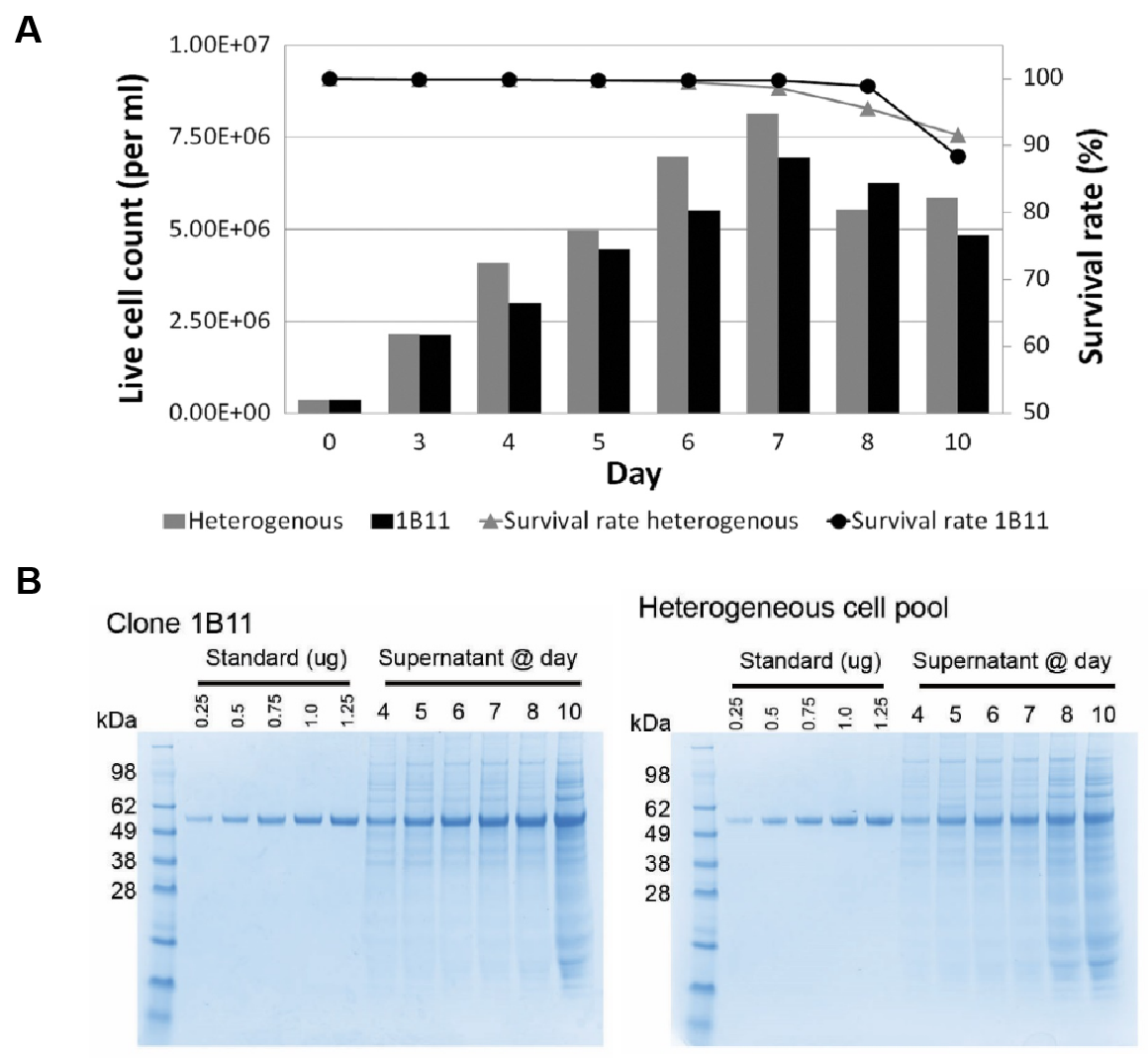 Ubigene specializes in cell line engineering, and we have successfully delivered different types of projects, including custom cell line construction, virus packaging, and plasmid construction to our customers all over the world. Also, Ubigene has established a KO Cell Line Bank with 3000+ in-stock KO cell lines and released a series of EZ-editor™ Gene-editing Products, such as Gene Knockout kit, etc. Our aim is to 'Make genome editing easier'! For more information, please contact us!