Colorectal cancer (CRC) is the fourth most lethal cancer in the world and is accompanied by about 900,000 deaths annually. Adverse factors such as aging, dietary habits in high-income countries, obesity, lack of physical activity, and smoking all increase the risk of CRC (Figure 1). The occurrence of CRC is usually caused by polyps and bursts into cancer over a period of approximately 10-15 years. Currently, most CRCs are thought to originate from stem cells or stem-like cells, and cancer stem cells are the result of the progressive accumulation of genetic and epigenetic alterations that inactivate tumor suppressors and activate oncogenic factors. Cancer stem cells reside at the base of colonic crypts and are essential for tumorigenesis and tumor maintenance. Current treatments for CRC include surgical local resection combined with endoscopy, preoperative debulking radiotherapy and systemic therapy, extensive surgery for locoregional and metastatic disease, local ablative therapy for metastatic disease, palliative chemotherapy, targeted therapy, and immunotherapy. Although these treatment options double overall survival in advanced disease, the disease mostly becomes symptomatic at advanced stages, and thereby research into the regulatory mechanisms that control the growth of these cancer stem cells, and the implementation of preventive screening programs, are of great importance to improve early detection and reduce CRC morbidity and mortality. [1] 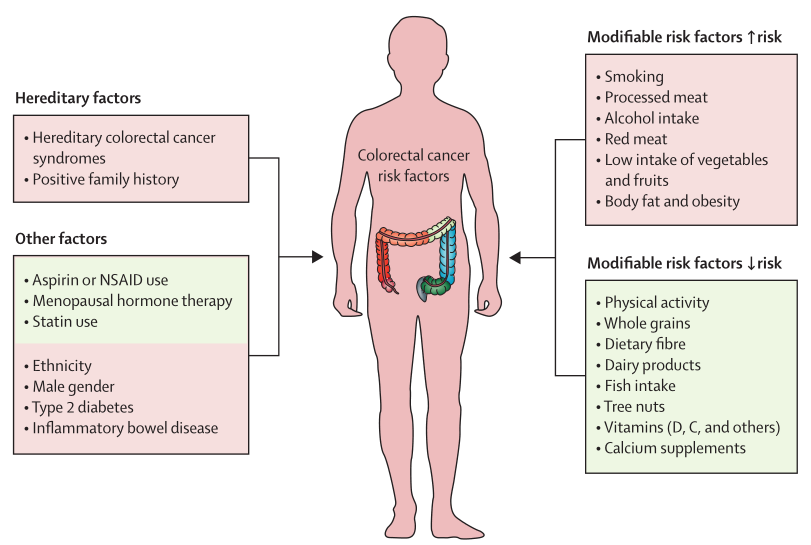 Overview of the pathogenesis of CRC

Overall, CRC has two distinct major precursor lesion pathways: 70 -90% of colorectal cancers arise from the traditional adenoma-carcinoma pathway (also known as the chromosomal instability sequence, Figure 2A) and an additional 10-20% of colorectal cancers arise from the serrated neoplasia pathway (Figure 2B). These two pathways, in relative order, represent different multiple genetic and epigenetic events. The chromosomal instability phenotype usually occurs following genomic events initiated by APC mutations, followed by RAS activation or TP53 loss of function. In contrast, the serrated neoplasia pathway is associated with RAS and RAF mutations and epigenetic instability characterized by a CpG island methylator phenotype, leading to cancers with microsatellite stability and with microsatellite instability. Further whole-genome studies have also identified novel markers and phenotypic subtypes leading to the hypermutated phenotype based on the mutations (e.g presence of the mutation or mismatch repair deficiency [dMMR] of the polymerase-ε or POLE) 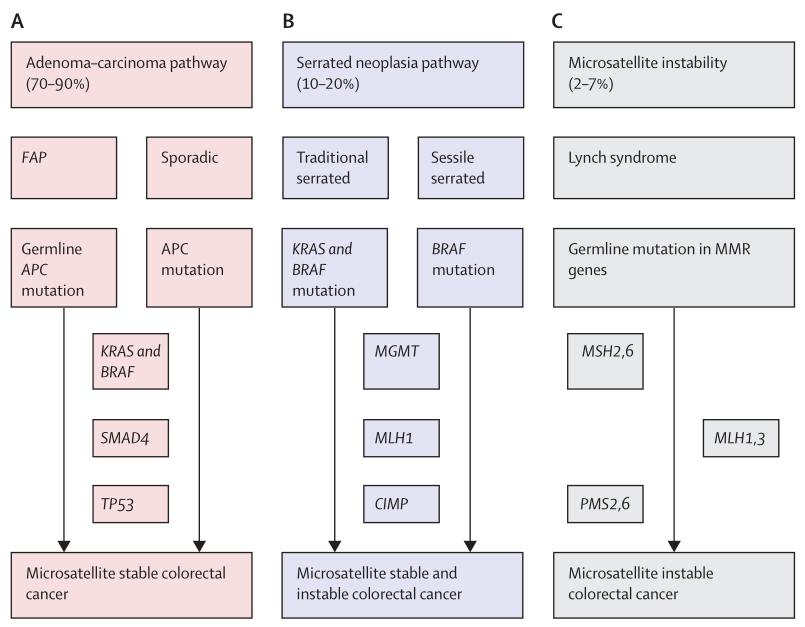 The molecular characteristics of right-sided (proximal) colon cancers differ compared with left-sided (distal) colon and rectal cancers (Figure 3). In addition to molecular differences, there are embryological, biological, and anatomical differences between left-sided and right-sided colorectal cancers. Laterality has a key role, especially in the metastatic setting, and is gradually being recognized as a predictive marker of anti-EGFR drug response.

Based on human CRC cell lines (SW480, HCT116, HCT15, SW620, etc.), the regulatory mechanism of CRC was further recognized by overexpression studies of miRNAs and lncRNA with regulatory effects. For example, miR-30b, miR-224, miR-17-5p, miR-214, miR-181b, miR-590-5p, and miR-191 have been identified as potential CRC markers. Among them, miR-452 served as a member of the miR-224/miR-191 family. And Prof. Yanqing Ding's team from Southern Medical University, China through using RT-PCR, overexpression/knockout experiments in vivo and in vitro, bioinformatics and cell luciferase function studies investigated that the aberrantly overexpressed miR-452 significantly suppressed the expression of GSK3β in CRC cells either intra- or extracellularly, by targeting the 3'-UTR of the GSK3β, thus leading to β-Catenin escapes, and migrates to nucleus binding sites of transcription factor family genes of the T-cell factor/lymphoid enhancer factor (TCF/LEF) downstream of the Wnt pathway, ultimately enhancing CRC proliferation and invasion (Figure 4). Studies have shown β-Catenin accumulation and nucleus localization is the hallmark of the activation of Wnt/β-Catenin signaling pathway, while the aberrantly activated Wnt/β-Catenin signaling pathway is an important factor in the tumorigenesis and progression of CRC, and from this, miR-452 could be considered as another potential marker to predict CRC and an effective therapeutic target for CRC. [2] 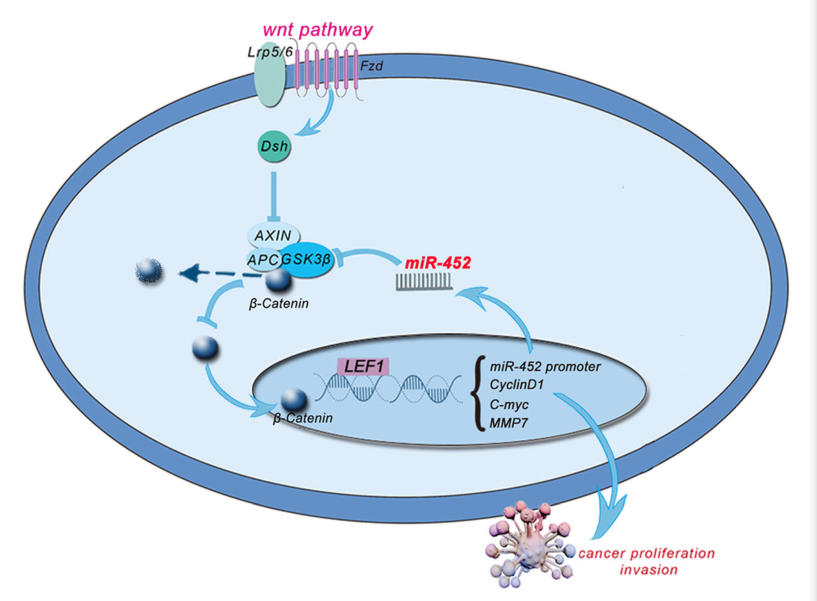 Figure 4. miR-452 promotes the proliferation and invasion of CRC by the regulation of the GSK3β-TCF4/LEF1 positive feedback loop

In addition to this, Wang Jing team from Capital Medical University, China used a similar overexpression method to overexpress long non coding RNA (lncRNA MVIH) in SW620 cells, and the results showed that lncRNA MVIH has the effect of promoting the cell proliferation, invasion and tumorigenesis of colonrectal cancer cell line SW620, while the specific regulatory mechanism of lncRNA MVIH needs to be further explored.

The formation of CRC is a multistep process, and the accumulation of genetic and epigenetic alterations such as aberrantly methylated tumor suppressor gene silencing, as well as activating mutations in oncogenes or loss of chromosomes, are the direct factors causing CRC. Studies have reported that the CpG island methylated homeobox transcription factor, NK2 homeobox 5 (Nkx2.5, also known as CSX) interacts with cell cycle related pathways to play a tumor suppressor role in CRC. The expert team from Union Hospital, Tongji Medical College, Huazhong University of Science and Technology, China through construction of Nkx2.5 overexpression vector and lentivirus packaging, generated the Nkx2.5 stable expression HCT116 and SW480 colorectal cancer cell lines, and a combination of RT-qPCR, Western Blot assay, cell proliferation, migration, apoptosis assays, etc revealed that due to the different mutational status of p53, Nkx2.5  overexpression also behaves differently in different CRC cell lines. Nkx2. 5 could interact with p53 to activate p21WAF1/CIP1 transcription, and this coactivating effect depends on the mutational status of p53. Therefore, the results suggest that Nkx2. 5 acts as a conditional tumor suppressor in CRC cells by activating p53-mediated p21WAF1/CIP1 expression. [3]

It is very common to construct overexpression cells in colorectal cancer research, but there is still a certain difficulty in stable cell line construction for cells with relatively low transfection efficiency, such as SW480, NCI-H716 and NCI-H716. In this case, Ubigene have investigated the transfection conditions as well as optimized the stable cell line construction procedure specifically for series of colorectal cancer cell lines, and Ubigene provides high-quality services in every stage from plasmid construction, virus packaging to stable cell construction. For more information, please contact us!