How does the RNA m6A methylation affect the process of EMT and VM in glioblastoma?

How does the RNA m6A methylation affect the process of EMT and VM in glioblastoma?

Glioblastoma (GB) is widely acknowledged as the most common malignant primary tumors in the central nervous system. Due to its invasive growth pattern and extreme advanced malignance, glioblastoma cannot be separated from normal brain tissue nearby easily and completely, which always results in its recurrence in a short time. Therefore, it’s urgent and necessary that further investigation on the molecular mechanism of invasive growth in glioblastoma should be addressed. Recently, an increasing amount of studies figured out that regulating Epithelial-Mesenchymal Transition(EMT) associated proteins, such as CDH1, CDH2 and MMPs, or the process of vasculogenic mimicry (VM), could modulate the migration and invasion ability of the glioblastoma, affecting the tumor progression. Many researchers believe that more thorough studies about the EMT and VM process in glioblastoma may shed light on a novel treatment for glioblastoma.

N6-methyladenosine (m6A) modification, has been regarded to be the most abundant in eukaryotic mRNAs and identified to act an essential part in the mammalian cells. The process of m6A modification is flexibly and dynamically manipulated by three categories of proteins, “writers”(methyltransferase-like 3 (METTL3), METTL14 and Wilms tumor 1-associated protein (WTAP)), “erasers”(fat mass and obesity-associated protein (FTO) and AlkB homolog 5 (ALKBH5))and “readers”(YT521-B homology (YTH) domain-containing family proteins (YTHDF1/2/3), YTH domain-containing proteins (YTHDC1/2)). There is considerable evidence suggesting that the level of m6A in glioblastoma could influence the proliferation, radio resistance and invasion of the tumor. Nevertheless, only limited attention has been paid to the function of RNA m6A modification during the progression of EMT and VM in glioblastoma.

In order to study the function of RNA m6A modification during the progression of EMT and VM in glioblastoma, the researchers Min Tao et al. from Department of Neurology, Sun Yat-Sen Memorial Hospital republished an article named “Decreased RNA m6A methylation enhances the process of the epithelial mesenchymal transition and vasculogenic mimicry in glioblastoma” in American Journal of Cancer Research. This article reported that they performed CCK-8 assay, EdU assay, apoptosis assay, wound healing assay, invasion assay and other experiments with METTL3 knockdown cell model and ALKBH5 overexpression cell model to evaluate the effect of RNA m6A modification in the process of EMT and VM in glioblastoma. Then the orthotopic mouse model of U87-GFP-Luc/U87-ALKBH5-Luc cells cells were established to explore the impacts of ALKBH5 on glioblastoma in vivo. The results uncovered that RNA m6A methylation suppresses the process of EMT and VM in glioblastoma, providing a new perspective to seek for a potential therapeutic target for GB.

In this study, the ALKBH5 overexpression cell line is sourced from Ubigene, which helps researchers study the effect of RNA m6A modification in glioblastoma at the cellular level in the background of ALKBH5 stable expression, and lays a solid foundation for its validation process. For stable cell line generation service (using lentivirus method), Ubigene not only uses the mature third-generation lentivirus packaging system, but also has our exclusive MOI database of various cell lines based on thousands of successful cases, covering more than 200 types of cell lines. So we are confident to provide what you need. And Ubigene also provides the single-cell clone isolation service. Click here for more stable cell line generation service detail>>

In this study, the researchers demonstrated that the m6A levels of RNAs were reduced in GB cells and glioma tissues. Patients with high mRNA expression of ALKBH5 acquired relatively shorter median overall survival (OS) time, while patients with relatively high expression of MEETL3 prolonged their disease free survival. The function of ALKBH5 in GB was also studied in depth, the CCK-8 assay demonstrated that upregulation of ALKBH5 could enhance the cell viability in vitro (Figure 1A). In the same way, the EdU assay illustrated as well that compared with control, overexpressing ALKBH5 apparently increased the ability of cell proliferation(Figure 1B, 1C). In addition, they measured apoptotic rates and cell cycle distributions by the FCM analysis. They found that U87-MG ALKBH5-overexpressing cells could accelerate cell cycle S phase and G2/M phase, with approximately 6% reduction of S phase and G2/M phase compared with U87-MG control cells (Figure 1F, 1G). These results indicated that ALKBH5 could influence cell cycle in U87-MG cells to enhance GB cell proliferation instead of altering apoptosis.

To explore functions of RNA m6A methylation during the EMT progression in U87-MG cells, the wound healing assay and the transwell assay were performed and the researchers noticed that overexpression of ALKBH5 or knockdown of METTL3 could both promote the migration and invasion abilities of U87-MG cells (Figure 2B-E). And Phalloidin staining showed that overexpression of ALKBH5 could lead to a more scattered pattern of cytoskeleton through the rearrangement of F-actin, a main protein of microfiber, which denoted a more active migrating form (Figure 2F). The protein expressions of FN1, MMP2 and CDH2 were all upregulated, while the protein level of CDH1 was downregulated in ALKBH5 overexpressing or METTL3 knockdown U87-MG cells (Figure 2G, H). These data indicated that RNA m6A methylation could make a critical difference to the EMT process of glioblastoma cells. 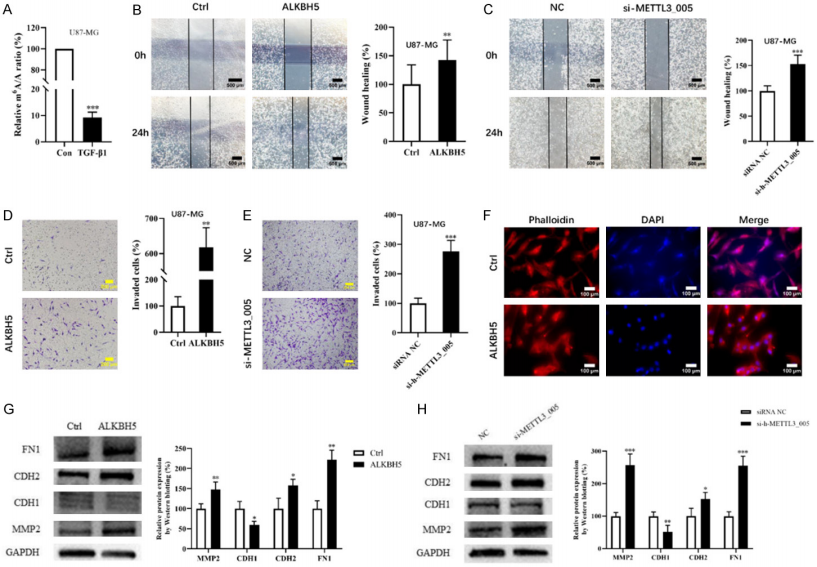 In all, they supply evidences to clarify that decreased RNA m6A methylation could enhance the process of EMT and VM in glioblastoma. Upregulation of ALKBH5 or downregulation of METTL3 strengthens the invasive properties of glioblastoma via regulating the expressions of CDH1, CDH2, MMP2 and FN1. This study highlights the different roles of RNA m6A modification in different types of cancers, further providing new insights into treatments for GB.

Gene overexpression or knockdown cell line model is the common cell line model to study the expression regulation effect of the downstream genes of the target gene. Ubigene provides stable overexpression/knockdown cell line service, and virus packaging service (lentivirus, adenovirus, AAV). Stable cell line can assist with the study of phenotypic experiments, and also avoid large errors in the data of repeated experiments and boost the smooth process of the experiment. Ubigene specializes in cell line engineering, and we have successfully modified more than 200 cell lines, and Ubigene has been cited in many publications. And we are now providing a time-limited promotional price for stable cell line generation service, as low as $1780, and we also provide single-cell clone isolation service.  For more information, please contact us!