the perfect match for respiratory research!

BEAS-2B cell line is a widely used immortalized but non tumorigenic human cell line, which was established by Curtis C. Harris team from normal human bronchial epithelial cells obtained from a noncancerous individual in 1988. The cell line was established by transfection of adenovirus 12-SV40 hybrid virus, and then immortalized by continuous passage. At present, BEAS-2B has been widely used to study the cellular and molecular mechanisms related to the development of lung cancer, such as the role of epithelial mesenchymal transformation (EMT) in the development of lung cancer, and the mechanism of pneumococcal infection. In addition, BEAS-2B cell line has been used as an in vitro cell model to analyze or screen various chemical and biological agents with potential pulmonary toxicity or lung carcinogenicity [1]. 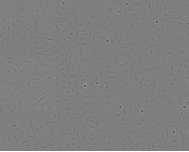 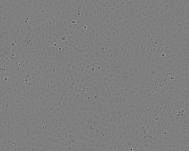 As an immortalized cell line, BEAS-2B has strong proliferation and passage ability. In addition, it has high transfection efficiency and simple karyotype (basically in line with 2n=46, Figure 2), so it is easier to conduct gene editing. It is often used with CRISPR/Cas9 gene editing technology to further study gene function and disease pathogenesis through gene knockout, point mutation or knock in. Next, Ubigene will share some cases of CRISPR/Cas9 gene editing on BEAS-2B to help to better understand the relevant applications of BEAS-2B gene editing. 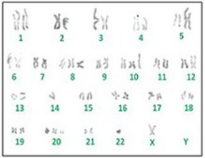 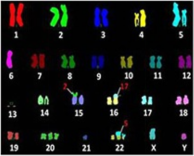 1.Knockout GENE-33 gene in BEAS-2B cell line to study the effect of GENE-33 on carcinogenicity of hexavalent chromium

GENE-33 (Mig6, ERRFI1) is an adaptor protein with multiple cellular functions. It was previously reported that the consumption of this protein will promote the transformation of lung epithelial cells induced by hexavalent chromium [Cr(VI)]. However, the early molecular events that mediate this process are still unclear. Park et al. used single cell RNA sequencing to compare gene expression profile differences between BEAS-2B pulmonary epithelial cells exposed to sublethal doses of Cr(VI) for a long time with or without GENE-33 deletion mediated by CRISPR/cas9. The data revealed 83 differentially expressed genes, the most significant changes being genes related to cell adhesion, oxidative stress, protein ubiquitination, epithelial-mesenchymal transformation/transfer and WNT signaling. The up-regulation of some neural specific genes is also obvious, especially ubiquitin carboxyl terminal hydrolase L1 (UC HL1). GENE-33 deletion and/or Cr(VI) exposure did not result in significant changes in cell morphology. However, whether Cr(VI) is exposed or not, GENE-33 deletion will lead to moderate but significant reduction of cells in G2/M phase of the cell cycle, and GENE-33 deletion will cause a significant decline in cell proliferation. Interestingly, Cr(VI) exposure eliminated the difference in cell proliferation between the two genotypes. In addition, GENE-33 deletion can significantly improve the migration ability of cells. Data show that the combination of GENE-33 deletion and chronic Cr(VI) exposure will produce gene expression patterns and phenotypes similar to those of transformed pulmonary epithelial cells [3]. 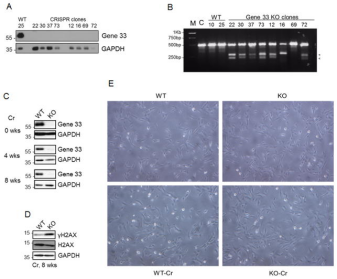 2.Validate the role of STING in the replication process of human rhinovirus

Human rhinovirus (HRV) is the most important pathogen that causes the common cold. The disease caused by this virus is a self limited disease, which generally heals itself in about one week. HRV belongs to the family of small RNA viruses. After infecting cells, it will reshape the internal and external membrane components of cells to form organelles that specifically promote virus replication. These organelles are called Replication organelles (ROS). Other single stranded positive RNA viruses also have this feature. STING is an important host factor of HRV infection. However, the function of STING in HRV replication cycle is still unclear. To verify the importance of STING for HRV replication, the authors used CRISPR/Cas9 technology to delete STING in BEAS-2B and primary human airway epithelial cells (ALI) cultured at the gas-liquid interface. The results showed that knockout of STING could significantly inhibit HRV replication, but had no significant effect on respiratory syncytial virus and influenza virus, indicating that HRV replication depended on STING [4]. 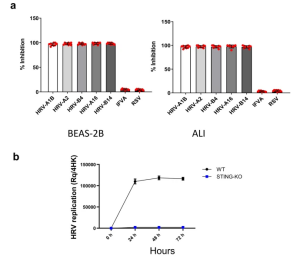 Pseudomonas aeruginosa is a gram-negative flagellated bacteria, which belongs to the common pathogenic pathogen of pneumonia. Respiratory epithelial cells provide the first line of defense against respiratory pathogens by producing physical barriers and releasing antimicrobial peptides and chemotactic agents. The degree of DNA methylation will affect gene transcription and chromatin structure, and will change during bacterial infection. DNA methyltransferase (DNMT3B) is an enzyme that mediates the de novo methylation of DNA. This is to verify that DNMT3B is related to the immune response of airway epithelial cells infected with Pseudomonas aeruginosa. The researchers used CRISPR/Cas9 to generate DNMT3B knockout BEAS-2B bronchial epithelial cells and the control BEAS-2B cells (transfected with non targeted gRNA). Two confirmed DNMT3B knockout clones and two control BEAS-2B clones were exposed to heat inactivated PAK for 12 hours before harvesting mRNA and supernatant. PAK induced significant up-regulation of CXCL1, CXCL8 and CCL20 mRNA and protein levels, which was more obvious in DNMT3B knockout cells, indicating that DNMT3B in bronchial epithelium participated in the regulation of chemokines, and would help Pseudomonas aeruginosa destroy the host defense ability by inhibiting the response of mucosa to flagellin. 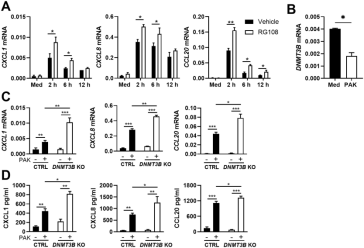 The CRISPR-U™ system developed by Ubigene is more efficient than the general CRISPR/Cas9 system in DNA double strand break. Not only significantly improves the efficiency of homologous recombination, but also achieves efficient gene editing in vivo and in vitro. It has great advantages for the gene editing experiment of BEAS-2B. Now, in-stock knockout BEAS-2B cell clones are available. High-quality homozygous KO deliver in 1 week, as low as $1980. Click here to explore>>

We also offer EXPRESS knockout service, only 4 weeks, fulfill all your gene editing needs. Get a quote>>