Breast cancer is one of the most common malignant tumors in women, and it has the highest incidence rate among cancers in women. CRISPR technology, as a simple, efficient and accurate gene editing method, can be used to identify drug targets and drug resistance targets, provide convenience for drug screening. It is helpful for researchers to study the drug resistance after treatment and reversal treatment. Up to now, there have plenty of publications about the research results of breast cancer using CRISPR technology. Here are some examples, hope this article can help you with your research!

PP2A is a major tumor suppressor whose inactivation is frequently found in a wide spectrum of human tumors. In particular, deletion or epigenetic silencing of genes encoding the B55 family of PP2A regulatory subunits is a common feature of breast cancer cells. A key player in the regulation of PP2A/B55 phosphatase complexes is the cell cycle kinase MASTL (also known as Greatwall). During cell division, inhibition of PP2A-B55 by MASTL is required to maintain the mitotic state, whereas inactivation of MASTL and PP2A reactivation is required for mitotic exit. MASTL as a target for human cancer therapy, in order to further understand its therapeutic relevance and its dependence on PP2A activity, teams from Cell Division and Cancer group of Spanish National Cancer Research Centre (CNIO) and Cancer Research UK Cambridge Institute used RNA interference or CRISPR/Cas9 technology to knockdown or knockout MASTL gene. The proliferation of some breast cancer cell lines, such as MDA-MB-231, was found to be impaired. The proliferative function of MASTL in these tumor cells requires its kinase activity and the presence of PP2A-B55 complexes. By using a new inducible CRISPR/Cas9 system in breast cancer cells, the genetic ablation of MASTL displays a significant therapeutic effect in vivo. This research suggests that the PP2A inhibitory kinase MASTL may have both prognostic and therapeutic value in human breast cancer. 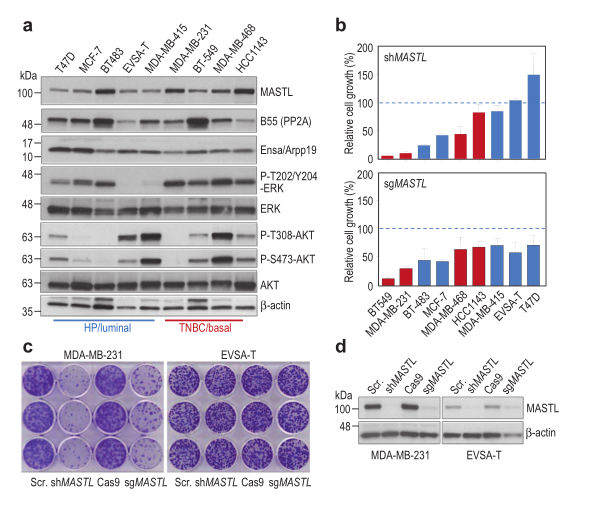 The conversion from estrogen-dependent to estrogen-independent state of ER+ breast cancer cells is the key step to promote resistance to endocrine therapies. In order to study the potential mechanism of MAPK/ERK signaling pathway in the growth of estrogen independent breast cancer cells, a research team from Jiangsu University selected a group of lncRNA from the database and analyzed their expression. CRISPR/Cas9 was employed to knockout (KO) linc-RoR in MCF-7 cells, while rescue experiments were carried out to re-express linc-RoR in KO cells. Colony formation and MTT assays were used to examine the role of linc-RoR in estrogen-independent growth and tamoxifen resistance. Western blot and qRT-PCR were used to determine the change of protein and lncRNA levels, respectively. The expression of DUSP7 in clinical specimens was downloaded from Oncomine (www.oncomine.org) and the dataset from Kaplan-Meier Plotter (http://kmplot.com) was used to analyze the clinical outcomes in relation to DUSP7. They identified that linc-RoR functions as an onco-lncRNA to promote estrogen-independent growth of ER+ breast cancer. Under estrogen deprivation, linc-RoR causes the upregulation of phosphorylated MAPK/ERK pathway which in turn activates ER signaling. Knockout of linc-RoR abrogates estrogen deprivation-induced ERK activation as well as ER phosphorylation, whereas re-expression of linc-RoR restores all above phenotypes.

Taken together, these results suggest that linc-RoR promotes estrogen-independent growth and activation of MAPK/ERK pathway of breast cancer cells by regulating the ERK-specific phosphatase DUSP7. Thus, this study might help not only in establishing a role for linc-RoR in estrogen-independent and tamoxifen resistance of ER+ breast cancer, but also suggesting a link between linc-RoR and MAPK/ERK pathway. 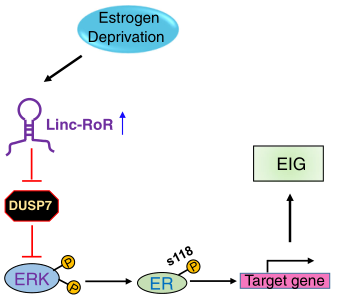 The 3-dimensional (3D) microenvironment of breast carcinomas is characterized by profoundly altered pH homeostasis, reflecting increased metabolic acid production and a confined extracellular space characterized by poor diffusion, yet the relative contributions of specific pH-regulatory transporters to 3D growth are poorly understood. Professor Pedersen from University of Copenhagen performed a series of experiments on MCF-7 (Luminal-A) and MDA-MB-231 (Triple-negative) human breast cancer cells. Cells were grown as ~700-950 μm diameter spheroids, which were subjected to Western blotting for relevant transporters (2- and 3D growth), quantitative immunohistochemical analysis, and spheroid growth assays. Individual transporter contributions were assessed (i) pharmacologically, (ii) by stable shRNA- and transient siRNA-mediated knockdown, and (iii) by CRISPR/Cas9 knockout. In MCF-7 spheroids, expression of the lactate-H+ cotransporter MCT1 (SLC16A1) increased from the spheroid periphery to its core, the Na+,HCO3− cotransporter NBCn1 (SLC4A7) was most highly expressed at the periphery, and the Na+/H+ exchanger NHE1 (SLC9A1) and MCT4 (SLC16A3) were evenly distributed. A similar pattern was seen in MDA-MB-231 spheroids, except that these cells do not express MCT1. The relative total expression of NBCn1 and NHE1 was decreased in 3D compared to 2D, while that of MCT1 and MCT4 was unaltered. Inhibition of MCT1 (AR-C155858) attenuated MCF-7 spheroid growth and this was exacerbated by addition of S0859, an inhibitor of Na+,HCO3− cotransporters and MCTs. The pharmacological data was recapitulated by stable knockdown of MCT1 or NBCn1, whereas knockdown of MCT4 had no effect. CRISPR/Cas9 knockout of NHE1, but neither partial NHE1 knockdown nor the NHE1 inhibitor cariporide, inhibited MCF-7 spheroid growth. In contrast, growth of MDA-MB-231 spheroids was inhibited by stable or transient NHE1 knockdown and by NHE1 knockout, but not by knockdown of NBCn1 or MCT4.

This work demonstrates the distinct expression and localization patterns of four major acid-extruding transporters in 3D spheroids of human breast cancer cells and reveals that 3D growth is dependent on these transporters in a cell type-dependent manner, with potentially important implications for breast cancer therapy.